A solar water purifier, with a difference

Scientists at the Nimbkar Agricultural Research Institute at Phaltan in Maharashtra developed a solar water purifier, that does not require electricity and does not waste water 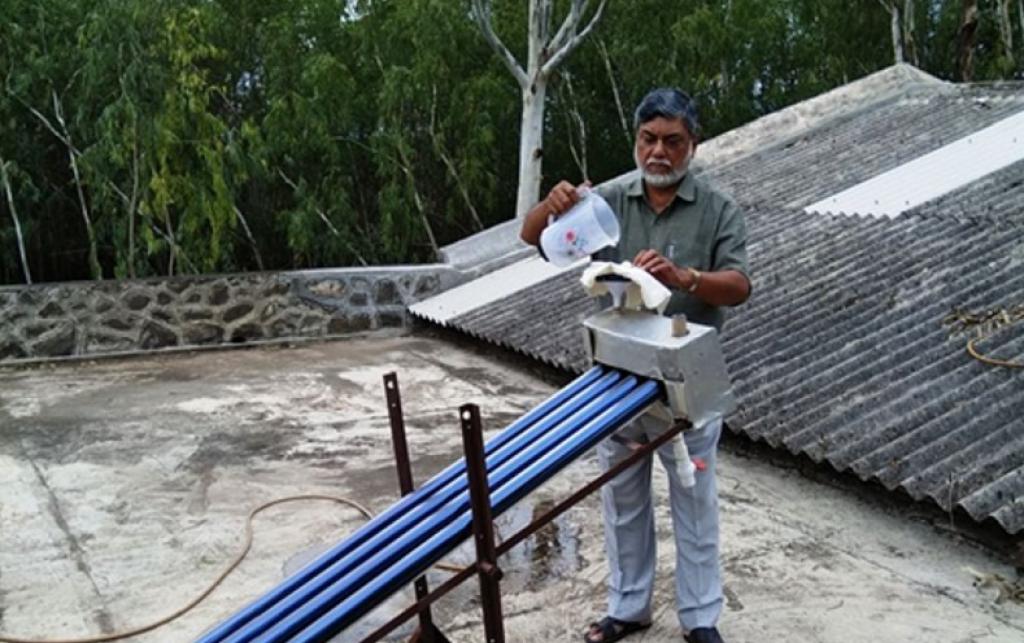 Availability of potable drinking water remains a challenge in rural areas in several parts of the country. Commercially available water filters are costly, need electricity to run and reverse osmosis (RO)-based purifiers waste a lot of water. Now Indian scientists have developed a unique low-cost solar water purifier that can address all these concerns.

The solar water purifier, developed by scientists at the Nimbkar Agricultural Research Institute at Phaltan in Maharashtra, does not require electricity and does not waste water. It is made up of four tubular solar water heaters attached to a manifold. The tubes have special coating to absorb maximum sunlight. They are like a thermos flask with vacuum between outer and inner tubes. Non-potable water is filled in the tubes after filtering with four-layered cotton cloth. The water gets heated in the stagnation mode by solar energy, making it potable.

Tests done in laboratories have showed that filtered water heated either to 60 degree for 15 minutes or 45 degrees for three hours inactivated all the coliforms, according to research results published in journal Current Science. Since the cotton cloth can be washed daily, it ensures that fitter is not clogged. Earlier studies by NARI had shown that filtration of raw water through four-layered cotton sari cloth reduces coliform count.

“Dirty water needs to be filtered with cloth to remove impurities. For instance, most of E Coli is attached with dirt. That’s why muddy water from rivers and canals during rainy season causes diarrhea and typhoid. Basic filtering using cloth filter, followed by heating through solar energy helps remove E. Coli,” explained Anil K Rajvanshi, who led the research team, while speaking to India Science Wire. However, he said, this system does not remove or reduce total dissolved solids like arsenic or other salts.

The main criterion in designing the solar water purifier was to ensure that it worked even under cloudy conditions and diffused solar radiation. Two purifiers installed in the institute have been working for the past one year. “Only for three days in the whole year, water temperature was below 45 degrees and on some of the cloudiest days when it was raining the tubular solar collectors heated the water to 45 degrees for three hours to make it potable,” the study said.

Tubular vacuum-based solar collectors are fitted in a specially developed stainless-steel manifold so that total volume of the four tube collector system is about 15 liters. “Such tubes are available in the market for about Rs 150 to Rs 200, but are coming from China. Nobody makes them in India. The frame can easily be fabricated in any rural workshop. For large scale production, a light weight frame can be shipped with the tubes. So with a single spanner the whole unit can be assembled. Our present design is based on this ease of assembly and costs about Rs 3,000,” Rajvanshi pointed out.

He said the next step would be to design systems which can use the waste heat from purified water for refrigeration. “Water in the tubes can go as high as 80 to 90 degrees and it has to be cooled for drinking. Instead of wasting this heat, it can be used for refrigeration to produce ice via an absorption refrigeration system.”

The study has been co-authored by Noorie Rajvanshi of Siemens Medical Solutions. (India Science Wire)