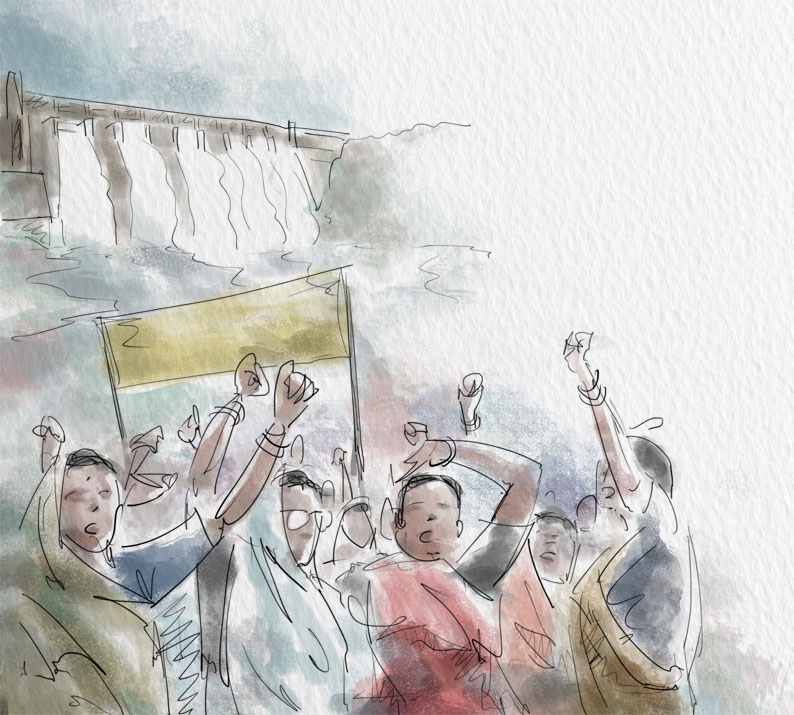 The right to water is a basic human right that is part of the right to life. It has become a political agenda not only of those who resort to electoral politics but also of the common people in the country. Every basti of the urban poor and every rural community seems to be raising questions related to water, be it about shortage or pollution of water or destruction of water bodies. However, to challenge the wrongs of the powerful and to establish an alternative to the dominant ways of managing water, we have to rely upon the mass strength of the people and support mass action, even mass movements.

People’s movements on water during the past six decades have, no doubt, challenged the paradigm of water management, which is centralised and leads to large-scale displacements, environmental impacts and economic bankruptcy. Large dams have been the symbols of and the means to such a paradigm. They are spread across India and number not less than 5,500, placing India next only to China. Large projects like Bhakra Nangal, once eulogised by Jawaharlal Nehru as “temples of modern India”, were later denounced by him as “disease of gigantism”.

But it was the Silent Valley movement in Kerala that forced the withdrawal of a plan to dam a river. This led to the questioning of such destructive, even unscientific and unmanageable, projects, as in the Narmada, Krishna and Godavari river valleys. While the struggle over Sardar Sarovar, one of the largest dams on the Narmada, over the past 31 years, could pose a stronger challenge and expose the falsehood and injustice by the planners, the same could not happen in case of dams in other river valleys, be it Damodar or Cauvery.

In spite of the fact that displacement and environmental destruction have been of equally formidable scale, mass movements with the affected people at the forefront had to prioritise displacement and even concentrate their struggles on rehabilitation; that is, on the social parameters alone. This does not mean the environmental preconditions, including the legal directives, are fulfilled.

The environmental laws, beginning with the Water Act of 1974 and the River Valley Guidelines in 1983, Forest Conservation Act of 1980, and the Environment Protection Act of 1986, followed by various notifications, happened to create a set of tools and introduce processes which could have taken care of water issues. However, the experience of the movements is that of violations and State’s promotion of those. The law of the land is lost in deliverance because of the lack of political will for proper implementation of environmental criteria and legal stipulations in the judgements. As a result, decades-long struggles, as in the case of the Narmada, Brahmaputra and now Polavaram on the Godavari, cannot receive an appropriate democratic and decisive response.

People are also struggling for a fair share in water allocation. Inequality in water distribution is more prominent in urban areas, such as Mumbai. Statistics show that 52 per cent of Mumbai’s population living in slums receives only 45 litres of water per person per day. This is not just low but unjust, considering that those in buildings receive three times of this. Such injustices have led to a struggle to assert the right to water in Mumbai and every other metropolis. Corporate takeover of urban water supply has converted the life support into a commodity. People have challenged this in cities such as Sangli in Maharashtra and Khandwa in Madhya Pradesh. The bottled water plants of Coca-Cola have faced the wrath of people for depleting groundwater. This happened in Rajatalab in Varanasi district of Uttar Pradesh, Plachimada in Palakkad district of Kerala, Wada in Thane district of Maharashtra and a few other places. Yet 3 million litres of Sardar Sarovar water is flowing into Coca-Cola bottles every day, depriving the drought-affected areas of Gujarat of their rightful share.

All this would raise a question as to whether the movements have succeeded in changing the policies or the paradigm in water management. The momentum created towards a radical change of vision in this sector in the late 1980s and the early ’90’s, with even the Narmada movement challenging the World Bank, is somewhat localised and the global market of water has made formidable inroads today. This has resulted in the World Bank daring to make a statement that “the role of Indian State must change from that of a builder and controller to creator of an enabling environment and facilitator”. The plan to promote not the small and local private actors but large investors is clear. There is so much research and documentation on this, but with a glaring absence of an over-encompassing, mass-based movement, with national coverage and impact. NGOisation of social movements as well as individualisation in all spheres of society, encouraged through “individual beneficiary targeted schemes” of the State and other tactics, are the major factors responsible.

And yet people’s organisations have been holding on to “popular” arenas, whether in struggle or reconstructive work. The alternative in policy dimensions to planning priorities are proposed not by any peripheral official department or agency, but the micro movements in building talabs or johads in Rajasthan or micro hydel projects in Kerala and the Northeast. A successful experience in ensuring rural water supply in Maharashtra had to await the last severe drought faced by 17 districts, which ultimately proved the failure of large dams in Maharashtra (50 per cent of all dams in India), for the state to change its tack and introduce “Jalswarajya”.

A challenge before the movements is not only to project technological alternatives, but also to process alternatives and assert democratic rights. Without this the space for mass movements will shrink further and be occupied by the investors of monetary capital, who are hand in glove with our elected representatives. The Narmada Seva Yatra, with a coterie of local government employees and the captive force of students, is a fraudulent propagandist approach trying to bypass or even kill the real issues, problems and solutions in the Narmada Valley.

Our movements will have to evolve new strategies to not only take up motivational drives but simultaneously expose the political euphoria vis-a-vis the ground reality. The interventions by social movements have to be at the global fora as well. NGOs, researcher and documentation experts have, no doubt, represented the popular will at these fora. However, when our real strugglers reach the doors of the national and world powers who reign and ruin, it makes a major difference. Can people’s movements succeed in challenging the callous and corrupt politics of today? It’s a question that cannot be left unanswered.

Medha Patkar is a social activist and founder-member of the Narmada Bachao Andolan.