Fishermen begin to weave nets, another source of income for them

Thousands of fishermen from Andhra Pradesh are stuck in Odisha, amid the nationwide lockdown imposed to curb the spread of the novel coronavirus disease (COVID-19).

The state government’s fisheries department imposed a two-months-long ‘fishing holiday’ — or restrictions on fishing by mechanised vessels — from April 15 to June 14, 2020, to conserve fish during the breeding period.

The fishermen from Andhra Pradesh usually leave for their homes at this time every year, but are now stuck in the state’s fishing villages, including Paradip, Puri and Gopalpur.

“My hopes of going back to my home in Kakinada (in Andhra Pradesh) were dashed, after the Prime Minister extended the lockdown till May 3,” said T Raja Rao, a fisherman who operates in Sandhakuda, a fishing village near Paradip.

Around 50,000 marine fishermen from Andhra Pradesh are now stranded in Odisha, according to Prasan Behera, the president of the Odisha Traditional Fish Workers’ Union (OTFWU). 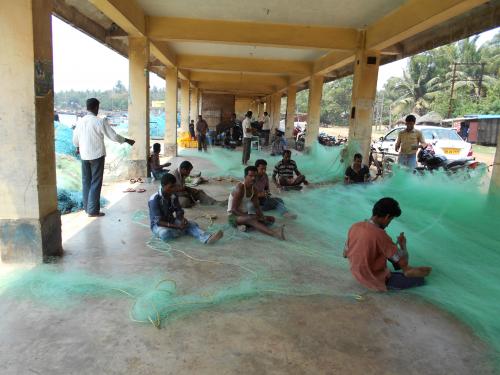 The fishermen took to weaving fishing nets in this period. Several groups of men and women can be seen in the villages of Paradip, Gopalpur and Astaranga, mending and weaving large gill nets and small nets.

Net-weaving was an important activity and a source of livelihood in most fishing villages during the holiday, said Ashok Rao, a fisherman from Paradip.

Fishermen were instructed to not venture into the sea during the holiday to avoid disturbances caused by trawl fishing, said Basant Dash, a joint director (marine) in the state’s fisheries department.

The trawling ban was introduced in 1998 to aid unhindered breeding of fish during the rainy season, said Dash.

Around 21, 832 fishing vessels, including 1,741 trawlers were registered in the state, according to the fisheries department.

All mechanised fishing vessels in the state — that includes 630 trawlers in the fishing harbour at Paradip — are not allowed to venture into the sea at this time. The ban extends to 12 nautical miles off the Odisha coast.

Small, non-mechanised boats measuring less than 8.5 metres-long that use nets with big gaps were exempted from the ban.

Nearly 300 species of fish, including the much sought-after Hilsa and species of shrimp, breed during the monsoon.

The fishermen who are exempted from the band are permitted to carry out fishing only in territorial waters and catch only pelagic fish, according to Dash.

Pelagic fish are those that are not found near the shore or at the bottom of the sea.

Several fishermen had welcomed the ‘holiday’, despite the lockdown, said Dash.