Dhar dam leak averted for the time being, but questions remain 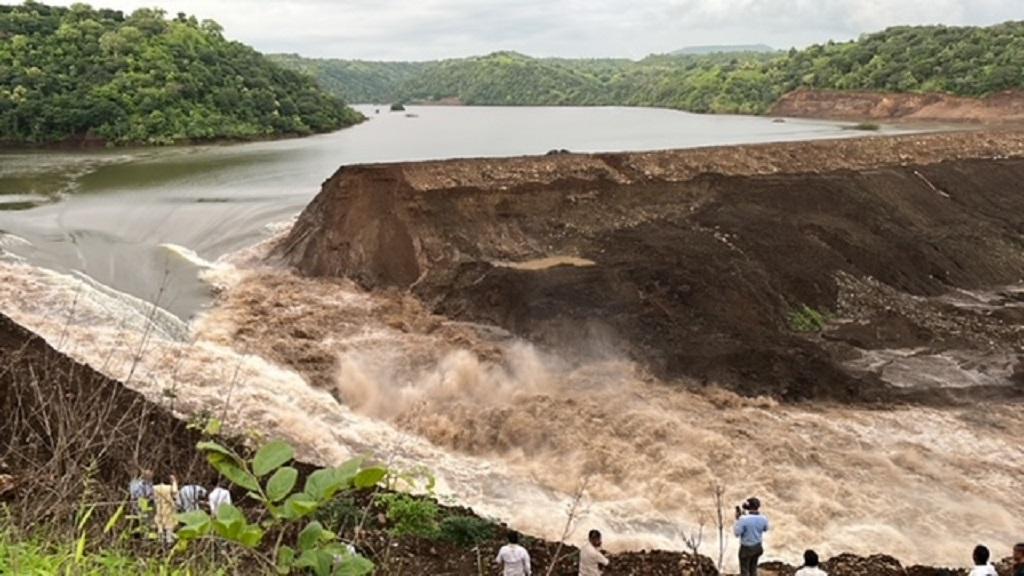 Water draining from the makeshift canal in the Karam dam. Photo: Arvind Shukla

The threat posed by the under-construction dam on the Karam river near Kothida village in Dhar district, about 280 km from Madhya Pradesh’s capital Bhopal, has been averted for the time being. But there are still many questions that need to be answered.

Villagers had noticed a leak in a portion of the mud structure August 10, 2022. The outer part of the structure collapsed August 12, after which the possibility of the Rs 304.44 crore project coming apart increased.

The dam, being built on the Karam river, a tributary of the Narmada, threatened to flood 18 villages, which were evacuated in a hurry.

The authorities first tried to repair the structure. They then built a makeshift canal to drain the river water, which had been rising steadily.

The water in the dam receded. Chief Minister Shivraj Chouhan then declared that the danger had been averted.

However, locals in the area are still worried. Raju Vaskel (21) of Gujari village said, "We have been at our wit’s end for the last four-five days. We could not even sleep. We feared that the dam might break at any moment and we would then drown."

Vaskel runs a tea stall along the highway in Gujari, about five kilometres behind the dam. He was told on the morning of August 15 that the threat had been averted.

“The water came very fast towards the villages. We were outside our village then. People in the vicinity said water had entered three villages, including some part of Kothida,” he said.

“I do not know as to how much damage my house has sustained. But we had a good crop of soyabean, cotton and maize which has been destroyed,” Vaskel added.

Rajyavardhan Singh Dattigaon (minister-in-charge of Dhar district) who was present at the spot said 5.5 million cubic metres (mcm) of water had been released through the makeshift canal.

“A committee has been formed to investigate the leak of the dam,” he added.

Bittu Brahmbhatt (27), a resident of Kothida village, said water had been leaking from the dam for three days. “Many of us who were scared, moved to the nearby forest. We had informed the authorities when we saw the seepage. But the officials did not come at that time. They reached only when the situation got out of hand,” he said.

Locals alleged that the dam was not so high 15-20 days ago. Work on it had been in progress for three-four years. But it was speeded up recently.

The locals added that the authorities should have used black soil which absorbs water, instead of red soil, which does not. The situation would not have arisen if this step would have been taken.

The government should build a cement dam, the residents said. Otherwise, death will continue to dance on our heads, they added.

The administration has cited heavy rains as the reason for the increase in water in the dam. A government press release said:

As soon as the Dhar district administration came to know about the seepage of water in the under-construction dam due to excessive rains on August 11, it took prompt action and apprised the concerned departments.

But locals like Vijay Kumar Singhal (52) of Gujari said the area did not receive heavy rainfall.

Data from the India Meteorological Department also showed that on August 12, the district had recorded 0.6 mm rainfall and 9.2 mm rainfall August 13.

So far, the district has received a total of 158.8 mm rainfall this season, which is said to be normal.

But questions are already being asked about the design of the dam. The government had also admitted to irregularities in the tender of the dam project in March.

Water Resources Minister Tulsi Silawat had admitted to the irregularities March 10, 2022 in a written reply to a question in the Assembly. He had demanded an inquiry by the Economic Offences Wing.

The construction work of the dam was to be completed in 36 months according to the tender conditions of 2018. But the work was stalled for almost two years due to the COVID-19 pandemic.

This could have been the reason why the administration and contractors had all made up their mind to erect the dam overnight. This could also be why water was allowed to fill the dam during the first rainfall itself.