Life on Earth is the result of several fascinating coincidences, of which the presence of water is considered the most important. But we are still not sure where this water came from 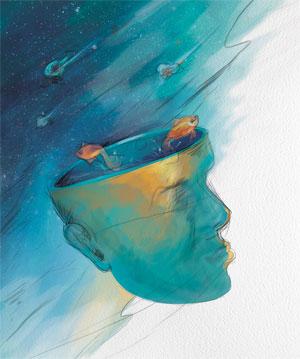 Darkness was hidden by darkness in the beginning, with no distinguishing sign, all this was water.
The life force that was covered with emptiness,
that One arose through the power of heat.
Desire came upon that One in the beginning,
that was the first seed of mind.

This excerpt of a hymn from Hinduism’s most sacred texts represents one of humankind’s earliest written inquiries into how Earth was formed and how all life came to be. Like other religious texts, it attributes the creation of water to some inexplicable divine force. And yet, one cannot miss the uncanny reference to scientific phenomena we have come to research or accept today. Written around 4,000 years ago, the poem recognises water as the prerequisite for creation of all life on Earth and alludes to an immense source of heat or energy from which water arose. Most of all, it also speculates that water existed right from the beginning of Earth’s formation, a possibility scientists are still investigating today.

It is true that without water, Earth would have been a dead, desolate planet, much like its closest sibling, Mars. Water is one of the most abundant compounds on Earth and influences almost every natural cycle on the planet. The adult human body is itself around 60 per cent water. Yet, the question of how we came to be in possession of this miracle compound remains.

School textbooks say water is extra-terrestrial. It was brought to Earth by meteors from passing comets which, when they struck Earth, became meteorites. Such bombardment was frequent when Earth was still being formed more than 4.5 billion years ago. To reach this conclusion, scientists hypothesised that in the moments after the Big Bang, when galaxies with solar systems and planets were being formed, scorching temperatures would have rendered it impossible for Earth to retain any water. Hence, water must have come from outer space as projectiles from comets (snowballs of frozen gases, rock and dust). Around 80 per cent of all the water in the world was thought to have come this way. This remained a widely accepted theory until advancements in scientific research indicated other possibilities.

In 1999, when researchers from California Institute of Technology were studying the Hale-Bopp comet, they observed that the water being carried by the comet differed from the water on Earth on one crucial aspect: Hale-Bopp had “heavy water” made of oxygen and deuterium, an isotope of hydrogen. Water on Earth, by comparison, largely consists of hydrogen and oxygen. Measurements from other comets pointed at the same inconsistency. The deuterium to hydrogen ratio (D/H ratio) of the water vapour emitted by comets was more than twice that seen on Earth, putting a dent in the comet theory.

A 2014 study, published in Science by researchers from the Woods Hole Oceanographic Institution in Massachusetts, USA, indicated that water came much earlier and from much closer to Earth than was believed. It showed that there were similarities among the compositions of rocks on Earth, the remains of the earliest meteorites (called carbonaceous chondrites), and meteorites from Vesta, an asteroid which formed somewhere near Earth around 14 million years after the birth of the solar system. “The average D/H ratio of the water that was circulating in carbonaceous meteorites coincides perfectly with the D/H ratio of terrestrial oceans,” says Francois Robert, a scientist at the French National Centre for Scientific Research. “Water was brought to Earth during the accretion period (when matter came together under the influence of gravitation to form our planet). In this period, a few planetesimals (mini-planets), which were formed in the cold regions of the solar nebula—between Mars and Jupiter—drifted inwards and participated in the final stages of the Earth’s accretion. These planetesimals were water-rich like present-day carbonaceous meteorites.” The study concluded that our planet could have received most of its water from these “chondrite-like bodies”.

And yet, Earth’s water may not be irrefutably “alien”. Many research papers have questioned the main assumptions of the “water is alien” hypothesis. Of these is the belief that water could not have survived the harsh conditions during Earth’s formation. In 2010, a study published in Chemical Communications stated that water molecules clung on to the surface of the dust which coalesced to form our planet. Computer simulations of Earth’s accretion showed that these molecules could withstand temperatures of up to 630°C. The simulations were conducted by scientists from the University College of London, University of Arizona, USA, and Germany’s University of Muenster.

In 2015, a study led by Lydia Hallis, a planetary scientist at the University of Glasgow, UK, showed that at least some of Earth’s water came from Earth itself. The team studied the composition of tiny amounts of water trapped within miniscule glassy inclusions in ancient volcanic basalt rocks in Baffin Island in the Canadian Arctic. These rocks have been preserved in their original form in Earth’s mantle for about 4.5 billion years. The deuterium content in these rocks is 22 per cent less than that of seawater today, indicating that water came from a deuterium-poor source than a deuterium-rich one such as comets. 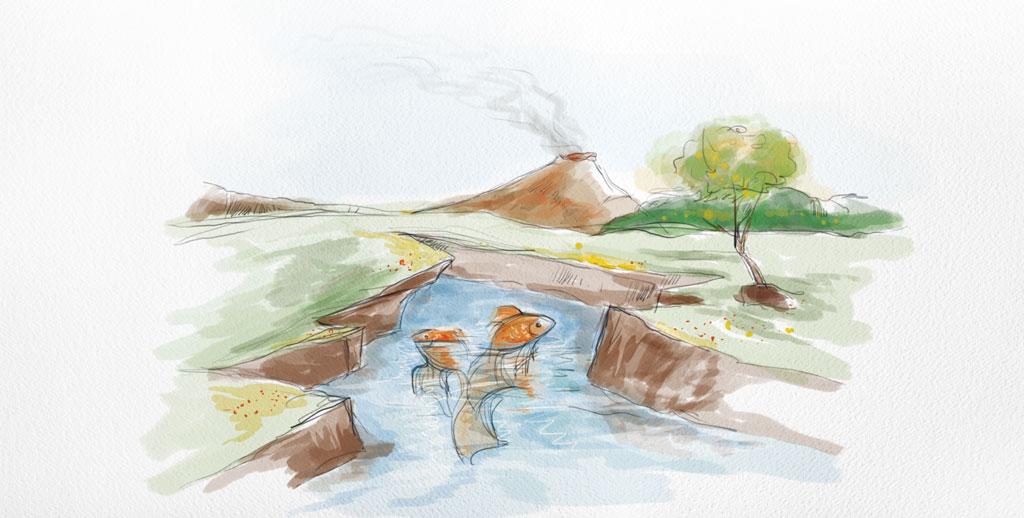 They measured the hydrogen composition of the glassy inclusions and found that it was similar to the water thought to be present in the protoplanetary disk (the disk of gas and dust around the sun from which the planets formed). “This similarity suggests that Earth’s building blocks were water-rich, and that at least some of this water was retained during formation, to eventually form the Earth’s oceans and atmosphere,” says Hallis.

In 2014, researchers from Ohio State University, USA, had proposed a similar theory which said that Earth was formed with entire oceans in its interior and that water was being supplied to the oceans through plate tectonics. They hypothesised that garnet, along with the mineral ringwoodite, could form water under certain conditions under Earth’s surface. This water might then be circulated to the surface along with mantle material.

Research published in January 2017 by the University College Dublin, Ireland, suggests that water may have originally been formed by chemical reactions between silicon dioxide and fluid hydrogen, deep within the mantle under high temperature and pressure. The researchers used computer simulations to show that silica quartz and hydrogen could form liquid water in the upper mantle under the right conditions. The team tested reactions at multiple temperatures and pressures found between 40 and 400 km below the surface, in the upper mantle. At temperatures just over 1,400°C and at a pressure roughly equivalent to 20,000 times Earth’s atmospheric pressure, the team found that water began to form inside the quartz crystals, leading to a massive build up of pressure. “The study was to investigate the viability of producing water from supercritical H2 reacting with silica in rock, to mimic the environment of the mantle. The water, once formed, is trapped in the rock under high pressure, and is likely to remain chemically and physically stable therein. We elucidate the reaction mechanisms, and propose this route as the major source of the ‘native-water’ hypothesis on Earth,” says Niall English, the professor under whose direction the research was carried out. The researchers believe that water could have been transported to the surface when this pressure was released along with earthquakes.

What makes the story behind the origin of water on Earth so complicated is the lack of a singular plausible source. None of the above theories are mutually exclusive and could have contributed to Earth’s water at different times or even simultaneously during the planet’s evolution. “Earth must have more than one source of water. Large impacts did not stop after Earth’s accretion, and to this day the solar system is still full of large water-rich bodies such as comets that could collide with Earth at any time,” says Hallis. She explains that around 3.9 billion years ago, there were many large collisions throughout the inner solar system (a period known as the Late Heavy Bombardment), and some of these impacting bodies must have been water-rich. Therefore, Earth continued to collect water long after its initial accretion had ended, and this water would have been from many sources. With new information and the power of computer simulations, scientists now say that comets’ contribution to Earth’s water might even be as low as 10 per cent.

While a definitive explanation for how much water came from where is still a long way off, scientists are trying to understand what makes Earth’s water so conducive to the formation of life.