Jodhpur blues: How the Indira Gandhi Canal has robbed the desert citadel of its character

There is ample water in what was once a water scarce place; traditional water bodies, architecture, social habits have consequently gone for a toss 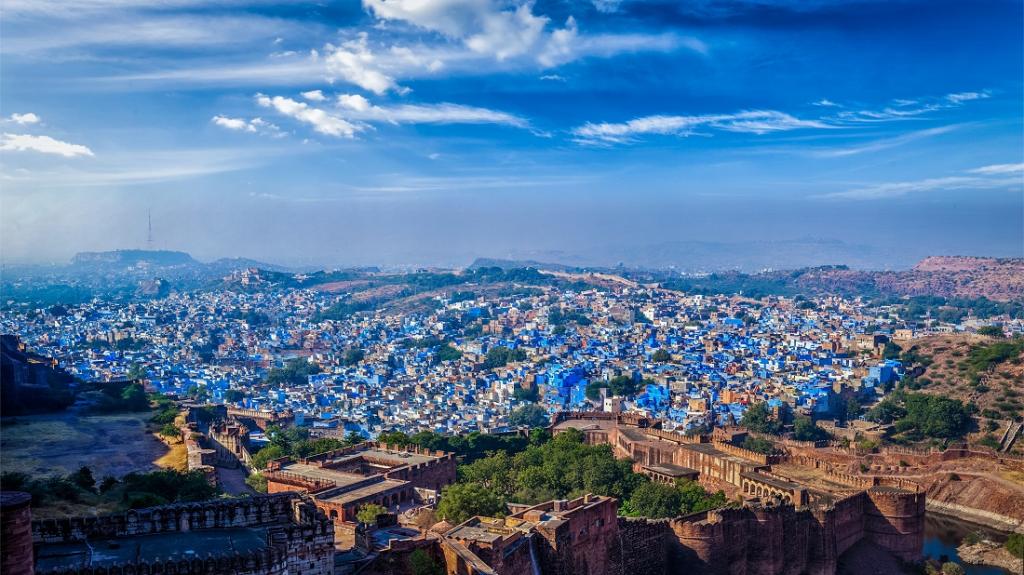 The distinct blue colour of Jodhpur's houses, painted to keep them cool, is now giving way to tile cladding due to availability of water. Photo: iStock

Jodhpur, the gateway to the Thar desert, is globally known as the ‘Blue City’ for the colour of its houses. But it may soon lose that sobriquet. Not just that, its entire character as a city on the edge of a great desert has changed. The reason: water. Not the lack of it but abundance.

The city, like other parts of the Thar, now gets water from the Indira Gandhi Canal, which transports water from Harike in Punjab, the confluence of the Satluj and Beas rivers, to Rajasthan.

The canal water has been credited for greening the Thar. But in the case of Jodhpur, something else is being seen.

The city, which for centuries had been used to a water-scarce lifestyle, now has plenty of water. Jodhpur, which used to conserve every drop of water, now has the highest coverage of tap water in Rajasthan, 97.4 per cent.

This has created new, unseen problems in its wake.

The first victim of this change has been the traditional water conservation structures of the city. Jodhpur was known for its talabs (ponds), baoris and jhalaras (stepwells).

These natural water bodies were the soul of Jodhpur and its very survival depended on them.

“Jodhpur faced famine in 1896-97. At the time, every resident of the city survived due to the baoris. Earlier, everyone used to consume water from the baori. Each baori had a neem tree next to it. Neem leaves and seeds used to mix with the water, making it therapeutic,” a retired forest department official said.

Now, the picture is different. With the coming up of the canal, some water bodies have been abandoned, some are unused, some encroached upon and some reclaimed for ‘public purposes’.

“Traditional water bodies have been abandoned. Many baoris no longer exist. Debris from the whole city is disposed into the remaining water bodies,” a shopkeeper said.

Houses in Jodhpur were defined by their blue colour. It is a combination of compounds such as copper sulphate and limestone that keeps away bugs and also delivers a soothing and calming effect.

Jodhpur was founded in 1459 by Rao Jodha, a Rathore Rajput chieftain.

The irregular pattern of streets helped in diverting wind patterns in the city. Almost every house had a courtyard which helped in cutting down the heat. The water bodies aided in keeping the climate cool and acted as venues for social and cultural activities.

Now, with the availability of canal water, the houses have changed, preferring cement and other modern facades. Jharokas have been replaced with windows, stone walls with brick and mortar and blue paint with tile cladding, having no courtyards and decreasing social gathering space.

Even the meandering streets have been converted to plane roads. This has increased the heat absorption within the buildings and decreased socio-cultural interactions.

The canal water, available through taps, is now used to sprinkle in the houses, to cool them. Tap water is also used in coolers to get rid of the heat.

The water bodies, which were venues for community interaction, have lost their significance.

“When the sources of water were our baoris and talabs, women use to go together to fetch water. We used to chit chat about families and the community. Now, that has stopped. No one comes out of their home and all these conversations never happen,” a 67-year-old woman said.

The introduction of canal water has caused the ground water table in Jodhpur to increase at the rate of one metre per year. The basements of shops in the inner city are full of excessive groundwater.

“My basement is full of water. We have to pump the water out from the basement every day. If we dig the ground in the old city area, we will reach water at a depth of five feet,” a footwear shop owner said.

Away from the core city, the situation is completely different on the outskirts. Here, irregular piped water supply and lack of water management is causing water shortages during summers.

People have started sharing water within the community whenever needed. “Initially, when the canal water reached here, we used to get it every alternate day. Now, it comes once in a week. When we need water, we have to get a tanker by paying an exorbitant sum of money,” a local woman said.