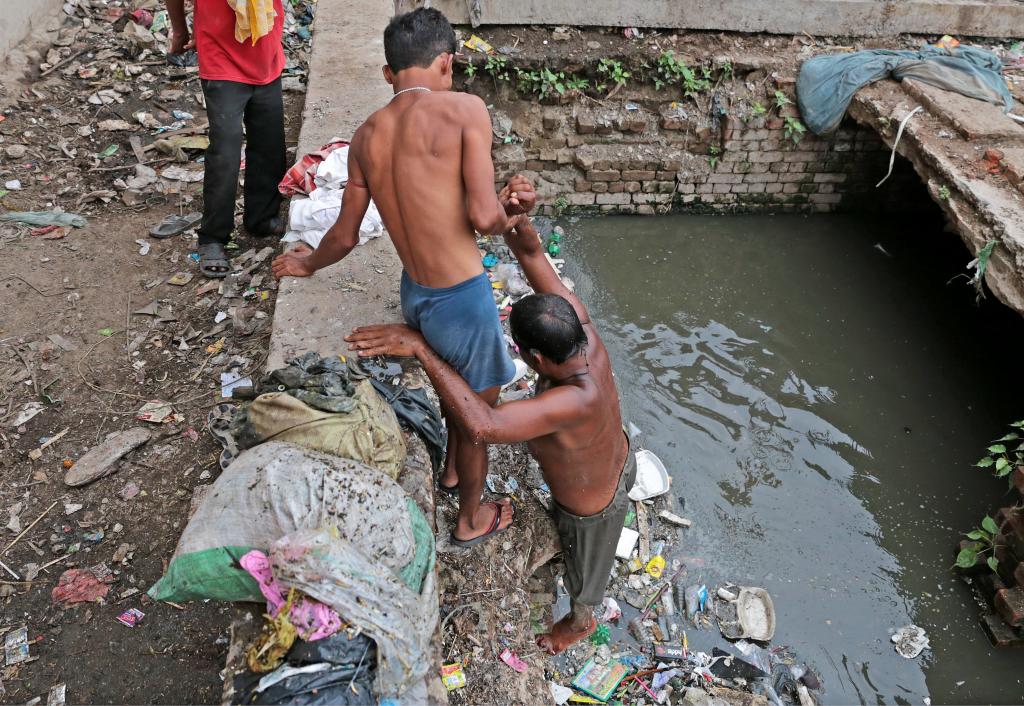 The December 2017 report of the Comptroller and Auditor General (CAG) showed that unused funds, the absence of a long-term plan and the lack of pollution abatement works are hampering the rejuvenation of the Ganga. credit: Vikas Choudhary/CSE

The Union Minister for the Ministry of Water Resources, River Development & Ganga Rejuvenation (MOWR & GR) Nitin Gadkari had declared that Ganga will be cleaned by March 2019. This was a departure from the position of his predecessor, Uma Bharati, who had said the river would be clean by 2018. Gadkari was entrusted with the new ministry by the Prime Minister Narendra Modi in October last year replacing Bharti – an action which raised the eyebrows of many experts.

When the National Democratic Alliance (NDA) came to power at the Centre in 2014, the cleaning of the national river Ganga was declared a priority under Modi’s leadership. A separate ministry was formed under Uma Bharti and Rs 20,000 crore was allocated in the budget 2015 on cleaning Ganga by 2020, a four-fold increase over the expenditure over the past 30 years. An umbrella programme called Namami Gange was declared along with the huge allocation and government officially started cleaning Ganga and its tributaries. To speed up the process, Namami Gange was even given the status of an authority in 2016. Experts, however, say that Gadkari has a tough task ahead and the cleaning of river Ganga is far from begun.

What is hampering the rejuvenation of the Ganga?

The December 2017 report of the Comptroller and Auditor General (CAG) showed that unused funds, the absence of a long-term plan and the lack of pollution abatement works are hampering the rejuvenation of the Ganga. The report analysed a total of 87 projects worth Rs 7,992.34 crore sanctioned after April 1, 2014. The report found that Rs 2,500 crore sanctioned to different government organisations and public sector undertakings has not been utilised. The report highlighted delay and non-implementation of project related to cleaning of the river, installation of sewage treatment plants, and construction of toilets in households. A corpus of Rs 198.14 crore as of March 31, 2017 available in the Clean Ganga Fund was not utilised due to non-finalisation of action plan.

The December 2017 data of the ministry shows that till date around 19 sewerage projects have been completed out of the total 86 planned along the main stem of Ganga. But all these were sanctioned before the NDA came to power. Under these projects, around 151 Million Litres Per Day sewage treatment plant were created and around 343 km of sewerage pipe was laid in Uttarakhand, Uttar Pradesh and West Bengal. The total cost was Rs 776 crore. There are 40 ongoing similar projects on the main stem of Ganga, of which 13 projects were sanctioned before NDA. Around 33 per cent of planned sewerage network was laid down covering 962 km. Only 26 per cent of the sanctioned amount was spent for this.

27 projects are in tendering process or their tenders are yet to be floated. In March 2017, the central government said that the delay was due to the tendering process, non-availability of land, legal issues, natural calamities such as flood and earthquakes and blamed the delay in permission from local authorities on road cutting/crossing.

The latest CAG report explained that only 46 per cent of the Detailed Project Reports between 2014-15 and 2016-17 were approved. So far only Uttarakhand has undertaken initiatives to identify the River Conservation Zones. For pollution abatement and ghat cleaning, 46 sewage treatment plants, interception and diversion projects and canal works of worth Rs 5,111.36 crore were planned. There was a delay in execution as land was not available or clearances could not be procured or contractors were slow. Collectively, only 56 per cent of the total amount released by NMCG for construction of individual household latrines, information, education and communication activities and management of solid and liquid waste were utilised by Bihar, Jharkhand, Uttarakhand, Uttar Pradesh and West Bengal. Only Uttarakhand achieved the target construction of 100 per cent individual household latrines. But the pace of solid and liquid waste management was slow and restricted to only to 13 gram panchayats.

For conservation of flora and fauna and maintenance of ecological flow, no concrete steps have been taken adds the report. The programme suffers from overall shortage of manpower. The monitoring meeting did not happen on the prescribed frequency. The implementation of Bhuvan Ganga, a web portal conceptualised to enable execution and monitoring of projects was slow. Even the role of Central Pollution Control Board (CPCB) in monitoring and evaluation was ambiguous as only 7.44 per cent of the sanctioned amount has been utilised. Against 5,016 compliance verifications required to be conducted by CPCB in respect of 988 Grossly Polluting Industries, only 3,163 compliance verifications were conducted between 2011-17. Improper management and implementation dilutes the concept of improving water quality, the report noted.
A July 2017 verdict by the National Green Tribunal also slammed the government for not cleaning a bit of the river even after spending Rs. 7,000 crores in the last two years.

How dirty is the Ganga?
The CAG report adds that the total coliform bacteria levels in all the cities of Uttar Pradesh, Bihar and West Bengal was 6 to 334 times higher than prescribed levels.

The data of the Central Water Commission collected between May 2016-June 2017 confirms high pollution levels in the river - the average Biological Oxygen Demand value (a parameter to measure the pollution level) of Ganga between Garhmukteshwar and Shahzadpur was not even suitable for outdoor bathing. 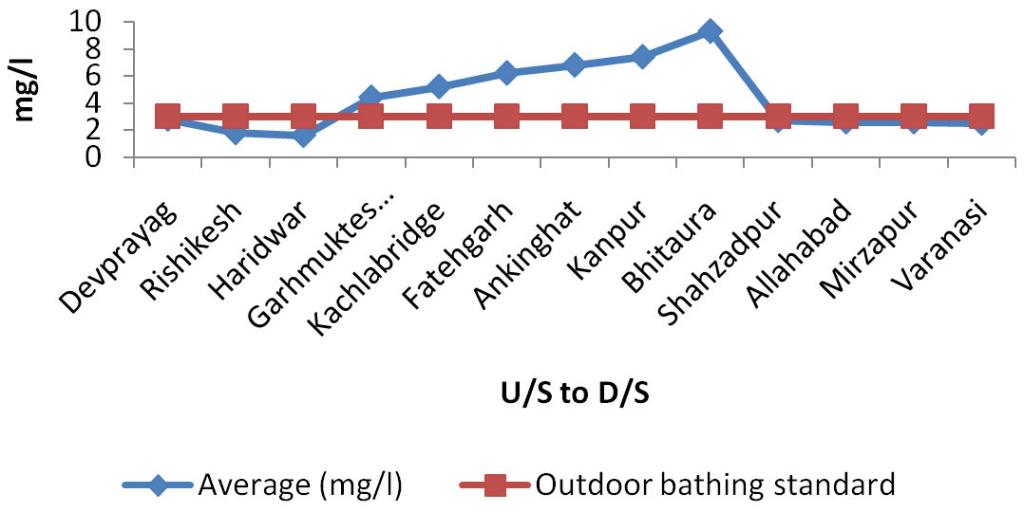 The CWC report adds that an analysis between 2006 and 2016 of water quality at two major hotspots— Kanpur and Varanasi during the monsoon period when there is dissolution of contaminants shows that quality of river never dropped below 3 mg/l (CPCB standard for outdoor bathing) for Kanpur . On the other hand, there was a slight improvement at Varanasi. But at the same time the entry of raw sewage in the river at Varanasi did not stop between 2006 and 2016, this is indicated by high faecal coliform levels in the river water (higher than 2,500 mpn/100 ml).

But the central government denied any such increase in the pollution trend in Lok Sabha session in 2017 although they agreed that there has been continuous entry of wastewater from human settlements and industries. When the NGT passed an order recently in response to M C Mehta’s petition on Ganga pollution, the order document clearly showed that there has been a continuous increase in sewage and industrial effluent entering the river since 2008-09 (see ‘Wastewater mathematics’).

The only projects showing some impact on the ground are that of surface cleaning. Around 11 trash skimmers had been deployed at Haridwar, Garhmukteshwar, Kanpur, Varanasi, Allahabad, Patna, Sahibganj, Nabadwip, Kolkata, Delhi and Mathura-Vrindavan. Around 13 lakh toilets were also constructed in rural areas near Ganga to reduce sewage inflow and that latest figure from MDWS shows that the coverage of household toilets in these villages was more than 99 per cent. But no improvement was observed in the water quality in the whole Ganga basin. This was because solid and liquid wastes are not managed in a planned and scientific way. A huge allocation of money did not help Ganga. The need of the hour is implementation of the projects.