So far, the government has focussed largely on curbing flow of untreated sewage into the river, but not on managing faecal sludge 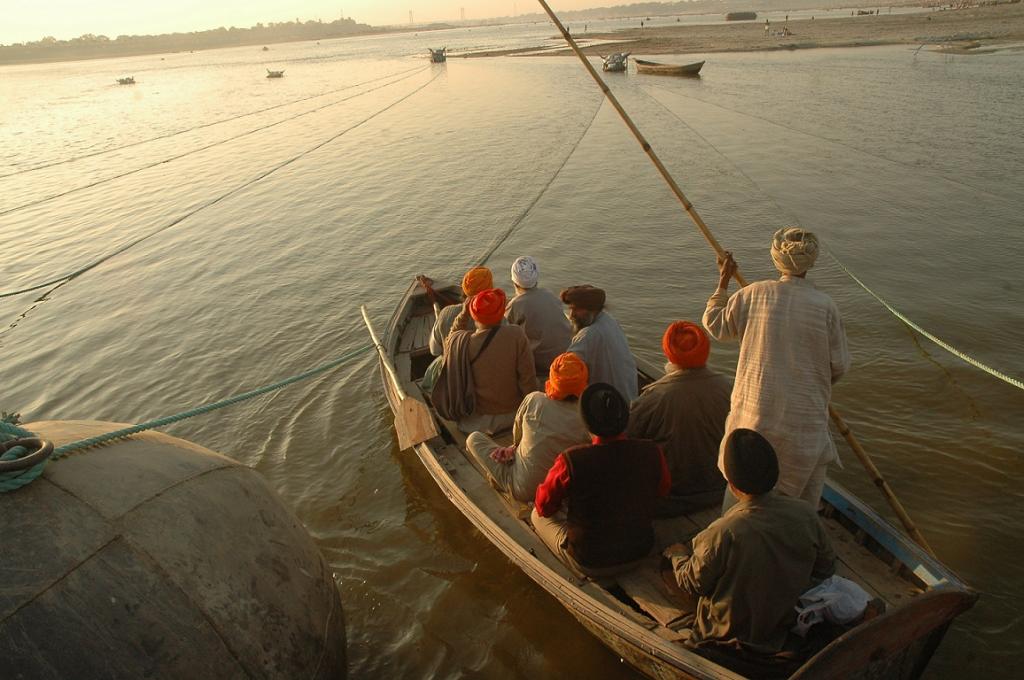 While estimated sewage generation from 97 towns located on the main stem of the Ganga is 2,953 MLD, the available treatment capacity is only 1,584 MLD. Credit: Agnimirh Basu

In July 2016, the then Union Water Resources Minister Uma Bharti had asserted that by 2018, people would see clean and serene Ganga. Almost two years later, her successor, Nitin Gadkari claims that the result of Ganga cleaning works would be visible on the ground by March 2019 as the river would be 70 to 80 per cent cleaner (from 2014-15 level) by that time.

The minister’s claim was substantiated by the water resources secretary U P Singh. Referring to the water quality monitoring data of the CPCB for the period 2015-17, he said that water quality (monitored at 80 locations) has improved in 2017 as compared to 2016. The DO (Dissolved Oxygen) levels have improved at 33 locations, BOD (Biochemical Oxygen Demand) levels at 26 locations, and Coliform bacteria count has reduced at 30 locations.

But does it ensure that Ganga will be 70-80 per cent cleaner by March 2019? It is time to take stock of the ground situation.

Little over a year back, the Delhi-based Centre for Science and Environment (CSE) visited 10 towns and cities across five states—Uttarakhand, Uttar Pradesh, Bihar, Jharkhand and West Bengal—located along the Ganga. It found that the towns are struggling to manage their faecal load. This could be attributed to the fact that under Namami Gange programme, the government has focussed largely on curbing flow of untreated sewage into the river, but not on managing faecal sludge.

Under Swachh Bharat Mission, more and more toilets are being built in villages and towns along the river. To make India open defecation free by October 2, 2019, the government is in the process of constructing 1.52 million toilets in rural areas along the Ganga and 1.45 million toilets (both private and public) in cities that dot the river banks. A back-of-the-envelope calculation by CSE suggested that these toilets will lead to construction of septic tanks and pits, generating 180 MLD of faecal sludge and septage. This huge volume of waste will find its way into the Ganga in absence of adequate treatment facility.

“There are several instances in these states where you have STPs installed and even sewer network is available, but most of the households are not connected to that network. We are in a situation wherein we are creating more toilets (and hence, generating more sludge) but not being able to ensure safe collection, conveyance and treatment. So, pathogens-ridden faecal sludge gets mixed with sewage and flows into the river. In most cases, the STPs are also unable to co-treat faecal sludge and septage. The bottom line is, having an infrastructure does not always ensure that it is functional and being utilised effectively,” says a sanitation expert.

In fact the project report available in the official website of Namami Gange acknowledges that while estimated sewage generation from 97 towns located on the main stem of the Ganga is 2,953 MLD, the available treatment capacity is only 1,584 MLD. By 2035, the sewage generation will increase to 3,603 MLD. The report also admits that out of the 84 STPs in 46 towns, 31 are defunct and 14 are underutilised. 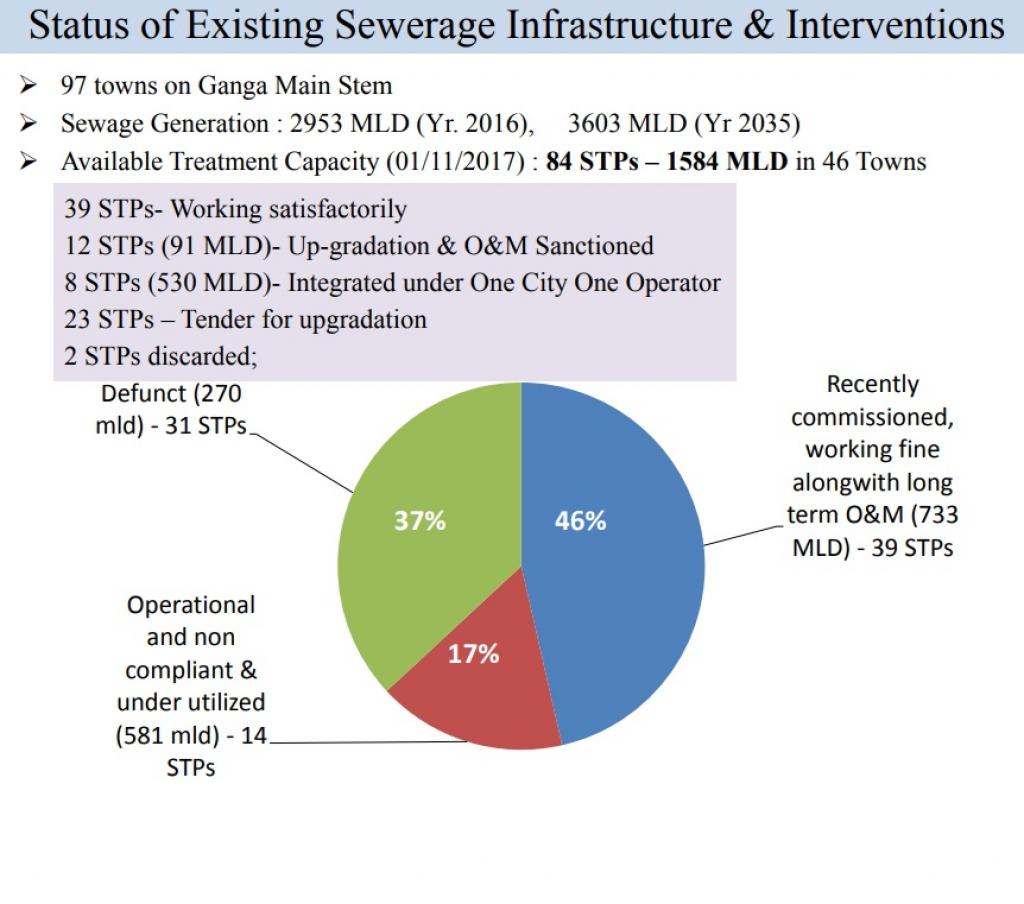 Additionally, there is a huge gap between sanctioned and completed sewerage projects. Out of the 196 sewerage projects (94 in Ganga Main Stem and 102 in tributaries) sanctioned in the last few years, only 47 could be completed as of May 2018. With only 25 per cent of the total projects complated so far,  the minister’s claim of cleaning Ganga by 70-80 per cent in less than 11 months from now sounds little unrealistic. 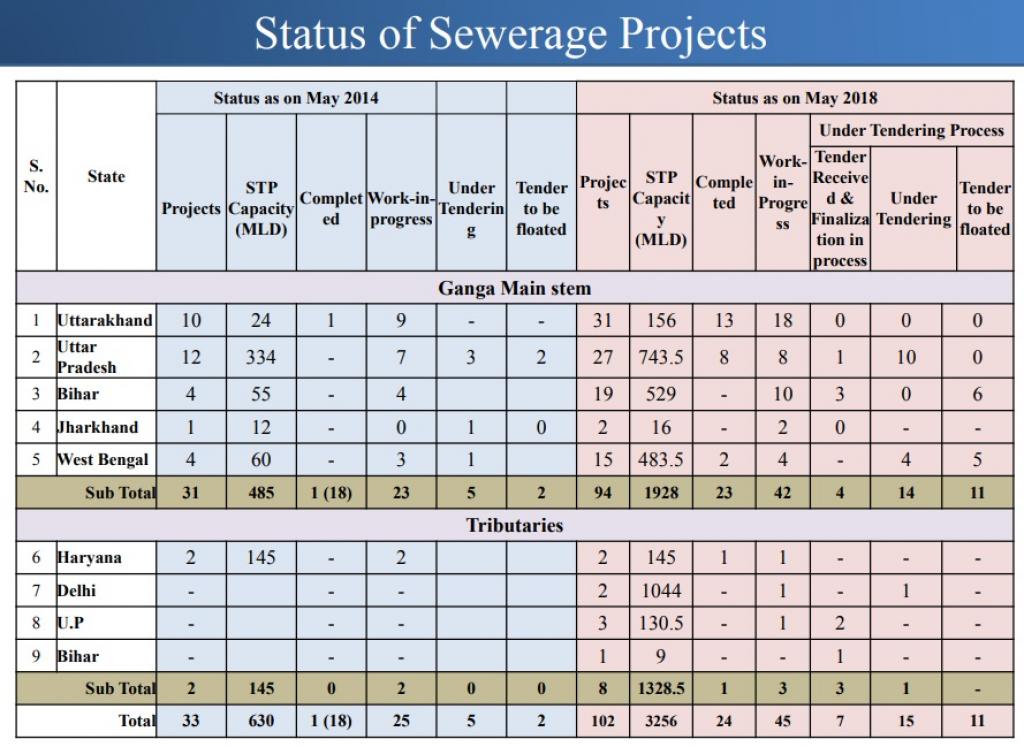 It is not just the delay in completion of sewerage projects but what also plagues the progress of Namami Gange is design malfunctioning in toilets. During CSE’s recent visit to Bihar and Uttar Pradesh, it emerged that toilet construction in Ganga floodplains is marred by design flaws. In these areas, twin-pit toilets have been created with pit depth going beyond 5 to 6 metres at several places, which may lead to groundwater pollution.

Also, as these areas get waterlogged and flooded during intense rainfall, there is a chance of overflowing of excreta and wastewater in open. Also, in most of the places that CSE visited, it found hand pumps located close to toilets. Since groundwater level in these areas is shallow, the chances of groundwater getting contaminated with seepage from soak pit are maximised.