The residents of Himmatpura village in Jalaun district realised the importance of water conservation in 2005, when the village built a check dam on a nearby stream at the insistence of non-profit Parmarth Samaj Seva Sanstha.

The aroma of moist earth, which many smelled for the first time in years, was so captivating that they still cherish the moment. Jalaun is among the 13 districts in Bundelkhand region that experience prolonged droughts interspersed with spells of flash floods. This leads to soil erosions and affects farming.

The check dam, however, meant that Himmatpura could grow two crops a year. “Things were so promising that I returned to the village in 2010 and started farming,” said Munni Lal, 45, who had migrated in the 1990s. Then in 2006, MGNREGA was launched.

“All those who had taken up farming wanted to set up bunds around their farms or construct a pond on their individual land,” village sarpanch Rajesh Kumar recalled.

Since water is a precious resource in Bundelkhand, some households also installed rooftop rainwater harvesting structures on their own. “For the first time in our lives, we were no longer dependent on rains for farming,” Kumar said. 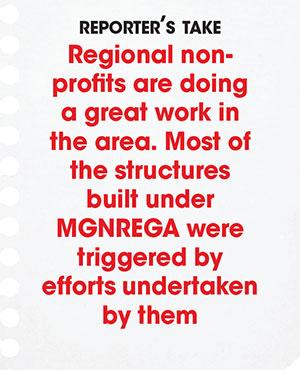 Their good fortune ran out in 2014 when the check dam became defunct due to siltation. “Over the next three years, our farm produce plummeted as we were left at the mercy of rains,” Kumar recalled. So, the panchayat decided to revive the dam.

It was the village’s first community intervention under MGNREGA. For two years, the residents worked to restore the stream and repaired the dam.

Today, the dam is the reason the three dug wells in the village have enough water to meet the drinking needs of 80 per cent of the families. It also helps irrigate all the farms spread over 30 hectares.

Its condition reflects economic prosperity of the residents. “During the years when the check dam lay neglected, I was harvesting 40 kg of mustard a year. Now, I get 400 kg from the same patch,” Pushpendra Singh said.

Lal grows four types of crops in a year: Wheat, paddy, vegetables and pearl millet. “My earnings have increased 10 times,” he said.

His daughter studies nursing and would soon be the first in the family to finish college. Today, all children in Himmatpura go to school — a huge achievement for households that did not have enough to eat just one-and-a-half decade ago.