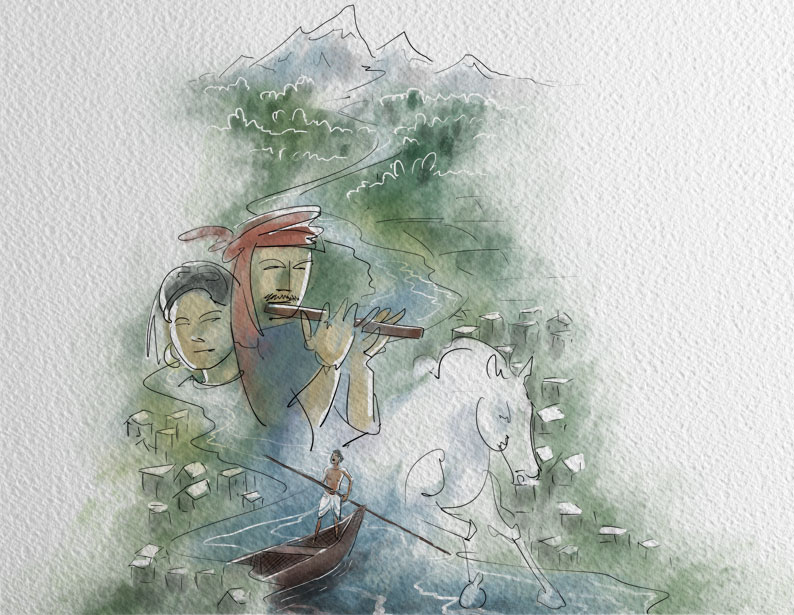 The cultural legacy of rivers overpowers the religious narrative. All faiths in the subcontinent, and not just Vedic Hinduism, have a deep connection with rivers which manifests in stories, lore, songs and poetry. Rigveda, which eulogises rivers, has verses of breathtaking lyrical beauty describing the Sindhu, or the Indus, as a “wild, magnificent white stallion, roaring and galloping through the Himalayas into the plains” or sometimes as a “loving mother cow, its calves following her from the steep mountain paths”.

Each river in the subcontinent has a story and most have several stories. Take the Chenab, flowing from the high mountain passes of Lahaul and Spiti, on to Jammu and Kashmir and then the Punjab plains in Pakistan. Entering Punjab, the Chen-Ab, or the Moon River, gushes right into the enchanted tapestry of Shah Abdul Latif Bhitai’s tragic love stories. So entangled, that she becomes the River of Lovers, Sassi-Punnu, Mirza-Sahiba, Sohni-Mahiwal… The Chenab is weaved into these stories like a character, just as in Waris Shah’s immortal Heer Ranjha.

Bhitai’s Sur Sohni begins at the fateful moment when Sohni realises, in the middle of the roaring Chenab, that the earthen pot she is holding as a float is dissolving bit by bit, crocodiles are coming for her, and she cannot reach Mahiwal across the bank. The moment has been immortalised in many a song, poem and painting in the Chenab-Indus belt. And although Sohni and her Mehar die young, their story has been flowing through the Chenab for centuries. But like Bhitai says,

To choose safe waters
is the route of impostors:
Those who love
take on the mighty river.

If we trace its beginnings in the Himalayas, the Chenab is formed by the confluence of the Chandra and the Bhaga rivers which originate near the Baralacha pass. They have a story as well. Chandra was Moon’s daughter and Bhaga, originating from the Surya Taal, was the son of the Sun god. The two raced to meet at Tandi, a place sacred to Hindus and Buddhists. However, Chandra reached before Bhaga and was impatient. She even tried to climb the mountain back to meet her lover.

A strikingly similar story comes from the other corner of the country: Sikkim. It is said that rivers Rongnuy (Teesta) and Rangeet were in love and wanted to meet in the plains. They decided to leave their homes and flow down. Here too, Rongnuy reached first and Rangeet, misled by his guide, was late. When he reached the plains, he was furious to see his lover there already. He refused to meet her and stormed ahead and Teesta had considerable calming to do!

From Sikkim, the Teesta flows on to West Bengal, and then to Bangladesh, a land of rivers. Here, rivers dominate not only the landscape, but mindscapes of people. Bhatiyali, that singular music genre which can be called the “river genre” took form here. Bhatiyali is not just a work song. There are many work songs related to water—the songs of the Volga boatmen, Marathi Koli songs, songs of river races in Kerala, China’s Haozi river songs—which are sung by toilers in unison as they haul a boat upriver. Bhatiyali is unlike any of these. It is a singular, lonely plaint down the river. The name itself has a bhati, “low tide”, in it.

These are songs of the boatmen who are stranded for days, even months, inside that maze of rivers which is the Ganga-Brahmaputra delta. Bhatiyali is a quest; it is not targeted at any audience, nor is it meant to rouse. It delves into some ancient questions of mankind: where did man come from? Where will these travels take him? Who is the boatman holding the ores of his boat? The songs are not just paeans to rivers; the intimate relation brings out all emotions. Just as the boatman says “Ganga amar maa, Podda amar maa” (Ganga is our mother, Padma is our mother) he also sings “Sarbanasha Podda nodi” (The all-destroying Padma river). Or “Amay dubaili, amay bhaasiali re” (You are drowning me, you are cheating me).

In Indian films, Salil Choudhury, S D Burman and Ritwik Ghatak have used Bhatiyali, the music and poetry of the river which has flown through ages; which mocks at the parochial water-sharing treaties and protests of the two nations trying to divide the limitless waters.

Several rivers across India, especially West Bengal, are male, each with its intriguing tale. Take the Shon, or Sonbhdra, for example. Arising from the Maikal Ranges, as does Narmada, Shon was supposed to marry the dazzling princess of the mountain, Narmada.

They had not seen each other. Before marriage, Narmada, overcome by simmering curiosity, sent her friend Johilla to “check out” Shon. Johilla went bedecked in Narmada’s jewels. We don’t know what happened next but Shon held Johilla’s hand just as Narmada rushed in. The fierce river took one glance, turned her back and raced to the west, flowing through an ancient rift valley, older than the oldest civilisation of South Asia. Shon was taken aback—Johilla was no princess, she was a servant girl. He called after Narmada and when she did not look back, raced himself to the east and fell in the all-encompassing arms of the Ganga basin. Irony of the tale is that Shon and Narmada are worshipped as a gods but Johilla is considered impure.

But deification is a risky business. Along with deification, stealthily but surely comes demonification. Just as we have river goddesses, we also have lesser goddesses, lesser rivers such as Kirtinasha, Karmanasha, Phalgu, Johilla, Dankini and Shankhini. Take the Kirtinasha, or the destroyer of fame. It is believed that during the 16th century the Padma (as the Ganga is known when she enters Bangladesh) flowed through Rajshahi district, through Dhaleshwari and Buriganga rivers directly into the Meghna, bypassing Dhaka.

It flowed past Rajnagar built by the famous Raja Rajballabh. But in the 19th century, the Padma abandoned this southern channel and took up its current channel, destroying settlements, villages and buildings in her wake. Raja Rajballabh’s empire fell like a house of cards and the swinging river took the name of Kirtinasha. The dramatic moment has enthralled many writers and poets like Jibanananda Das and Mohammed Rafique, who has penned a sequence of 51 poems called Kirtinasha.

Like rivers, their stories too are never-ending. Like tributaries meet rivers, their stories flow, change and grow through the time. River stories bind us. Sindhu might be a shared, contested river basin between India and Pakistan, but millions of Hindus and Muslims from across the border listen to the stories of Jhulelal, the god of the Indus. Be it Bangladesh or Pakistan or Nepal or Bhutan, we share these stories, just like we share the rivers.