Security ring: How MGNREGA rejuvenated tanks of a Tikamgarh village

A network of 55 tanks that get filled up one after the other when it rains, has cured this village of droughts

The tanks surrounding Nadia village in Tikamgarh, Madhya Pradesh, need negligible maintenance because they do not obstruct the natural flow of rainwater

Upon entering Nadia, one is forced to shed the usual notions of a village in Bundelkhand: Perennial droughts, distress migration, abandoned farms and dried-up waterbodies. The village in Tikamgarh district of Madhya Pradesh appears surrounded by a network of tanks, with water available even in February.

Called tallaiya in the local language, the structures are open water storage bodies, flanked by walls on two sides to direct the rainwater into them. Their construction follows the natural slope of the terrain in such a way that the rainwater after filling the first tallaiya, flows into the next one and eventually fills all the 55 tallaiyas that have been built around the village in the past 15 years. 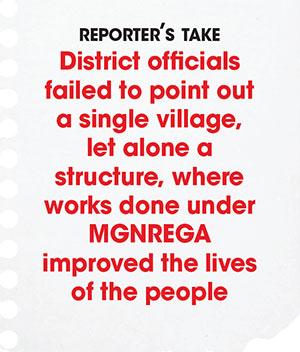 Residents say the structures need negligible maintenance because they do not obstruct the natural flow of the rainwater and do not get silted. “Water from each tallaiya irrigates 4 ha of farmland. They also allow groundwater recharge,” says Roop Singh, deputy sarpanch of the village.

Residents have also constructed check dams on the two major seasonal streams that flow just outside the village boundary and have created several dug wells on individual farmland.

“We have escaped the water curse of Bundelkhand because of these structures built under MGNREGA,” says Keshavdas Kushwaha, a resident, adding that he has witnessed too many droughts in his life to keep count.

The village has also seen the return of the young population in recent times because of the 100 days a year of assured employment under MGNREGA. In 2005-06, only 30 per cent of farmland was under cultivation; this has now gone up to 90 per cent, says Singh.

Kushwaha claims his income has increased by 300 per cent in the past six years. “I earlier grew only pulses. Today, I cultivate wheat, peas, black gram, soybean and groundnut. Both my children now study in a private school in a nearby town. I spend about Rs 40,000 annually on their education,” he says.

His neighbour Sonu Yadav has started horticulture and vegetable cultivation on his 0.4 ha and earns up to Rs 20,000 every six months. For him, it has been an income growth of 400 per cent in the last decade.