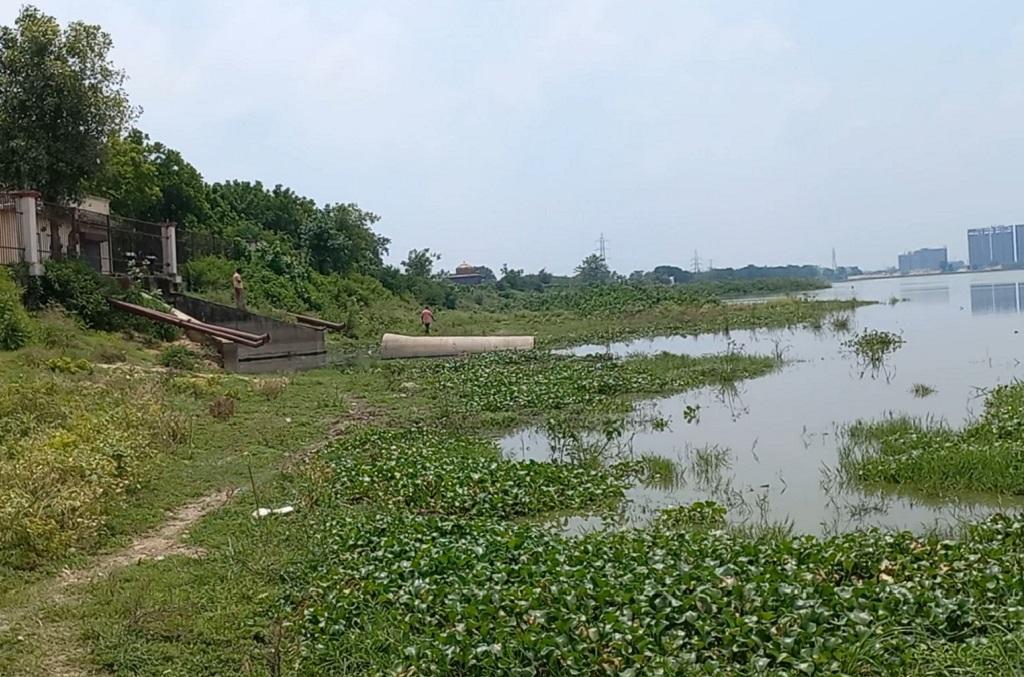 The Centre and Uttar Pradesh governments claim to have spent more than Rs 305 crore to clean Ramgarh lake in Gorakhpur and beautify it. The lake, however, has turned green and stinks as untreated sewage from a dozen drains directly flows into it, despite two sewage treatment plants.

The National Green Tribunal recently imposed a fine of Rs 120 crore on the Uttar Pradesh government for contamination of water bodies and groundwater in and around Gorakhpur. The administration focuses its cleaning efforts only in the boating area, ignoring the rest, said locals.

The correspondent visited the lake and found that dirty water from a drain was flowing into the lake near a car showroom. Some people were also fishing near the sewage pumping station.

Sewage lines from residential colonies also go to the lake and the dam was also damaged in many areas. Hyacinths have also taken over a large part of the lake.

The Union Ministry of Environment, Forest and Climate Change had allocated Rs 124.3 crore to Ramgarh Tal under the National Lake Conservation Project in 2011.

The original target for the conservation work was 2013. Sewage from six drains flowing into the lake was to be diverted and two sewage treatment plants (STP) of 15 MLD and 30 MLD, along with two sewage pumping stations, were set up.

The construction work of three schemes under the project has been completed and two are under construction. However, due to the non-allocation of the regular budget, the scheme’s budget was revised to 196.57 crore.

The lake’s condition has improved significantly after its inclusion in the National Lake Conservation Plan in 2011, said Ratan Sen Singh, project manager for the Earthen Bund Protection Works for Ramgarh lake.

“The lake’s Biochemical Oxygen Demand (BOD) was 108 milligrams per litre, which has improved to 11 mg/L,” Singh said. BOD is an important parameter for assessing water quality. A high demand can indicate that levels of dissolved oxygen are falling, with potentially dangerous implications for the river’s biodiversity.

A section of Gorakhpur citizens had begun protests in 2010 over the pathetic condition of the lake, said Shiraz Wajih, an environmentalist associated with the Gorakhpur Environmental Action Group. “The administration started work on the lake following the protests. It is shameful that sewage continues to flow into the lake,” he said.

Wajih said the governments were focusing only on the beautification of the lake. However, the focus should be on the conservation of the waterbody and improving its water quality.

Gorakhpur Development Authority (GDA), municipal corporation of Gorakhpur and UP Housing and Development Board department of the state government have signed an agreement for the STPs and sewage pumping stations.

The bodies mutually agreed to bear the cost of maintenance and operation of 15 MLD and 30 MLD STPs and pumping stations set up on both the banks of the lake. The three departments have agreed to give Rs 6.6 crore every year to the Uttar Pradesh Jal Nigam for it.

GDA is supposed to give around Rs 2.5 cr, the corporation 2.48 cr and the housing department owes Rs 1.61cr. However, none of these departments pays their share on time.

The housing department is yet to shell out any part of its share. The paucity of funds causes the STP to stop sometimes functioning, leading to sewage falling directly into the lake.

“This area of the lake was last cleaned around three years ago,” said  Ajay Rawat (30), a resident of Moharwa Ki Bari area. “The area near the road and the zoo are cleaned regularly. The drain water of about 1,000 houses, including Sahara State Colony, is also dumped in the lake.”

Ramgarh lake was declared a wetland and its marine ecosystem should be protected, said local environmentalist Anchit Lahiri. “Swimming pools for water sports receive clean water, but the lake gets ignored,” he said.

Due to the silt, a foul smell rises from the lake and the water also appears green. “A proposal to clean the lake for Rs 348 crore was sent to the central government by the state government, which has not been approved yet,” said Singh.