Santosh Devi, a former sarpanch, says attaining total sanitation for her village was easier than ensuring clean and sweet water 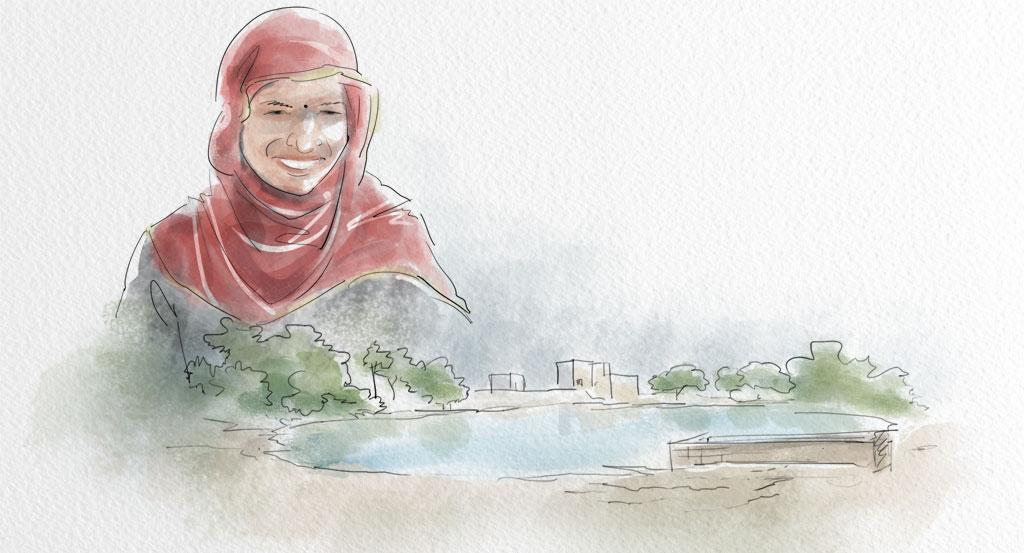 I have grown up here, around Hassangarh village in Haryana. And for as long as I can remember, the village has always faced acute drinking water crisis. The region’s groundwater is too saline or hard for most uses, let alone for drinking. Even animals and livestock stay away from it. Its quality has deteriorated over the years as people keep digging deeper to extract more water. To alleviate the shortage, the municipal authority of neighbouring Gohana town started supplying piped water to our village some 30 years ago, soon after Hassangarh was recognised as a gram panchayat. But even the municipal water is saline. Over the years, the hard water has led to scale buildup inside the pipes and clogged them. It has also corroded the pipes at places. But the pipes have neither been repaired nor replaced. Today, scarcity of drinking water bothers the residents more than anything else.

Though Hassangarh was set up about 120 years ago, no one in this village of 800 households has a patta or record of land ownership. The use of saline groundwater for irrigation has reduced crop yield. Most people from the village now go to towns to work as daily wagers. But I don’t remember people complaining about livelihood issues. They always lament the lack of access to potable water. Unavailability of drinking water is particularly a cause of worry for women who are responsible for managing household chores.

Summers are the trying times for us. Even the taps run dry during the long dry season in Haryana. And Hassangarh’s women have to walk 4 to 7 kilometres every day to other villages in search of drinking water. It’s not easy making such long trips, balancing heavy water pots on head. Some women also make multiple trips to arrange enough water for their families.

Lack of adequate water severely affects sanitation, and once again women suffer the most. Building toilets at home picked up in Hassangarh in the early 2000s. Construction of toilets has increased at a phenomenal rate in the past few years following the launch of Swachh Bharat Mission. In fact, as sarpanch one of my objectives was to achieve 100 per cent coverage of household sanitation and ensure that people use toilets. By the time my term was over in 2016, almost 95 per cent of the households had toilets. The village attained total sanitation in January this year. But I doubt all these toilets will be of any use come summer.

Besides, though we have built so many toilets, we do not know how to get rid of the waste. So most households simply dump the sewage into stormwater drains that join the only pond in the village. Till a few years ago, this pond was the only source of freshwater in the village. But the pond, which used to store rainwater, has now turned into a cesspool. This has further aggravated the water woes of the village.

During my tenure as sarpanch, I got the tap water tested, which showed the water supplied by the municipality had a TDS (total dissolved solids) of 1,200. Such high level of TDS makes water unsuitable for consumption. I immediately arranged a tanker to provide RO water (water treated with reverse osmosis to remove excess TDS) to the village residents. The tanker charges Rs 1 per litre. (People in rural areas of Haryana usually have to shell out Rs 2 per kilolitre of water). While the tanker water is not a substitute for clean running water, it helps families get by on a daily basis.

Unfortunately, I had introduced the tanker as a temporary measure. But the village residents continue to depend on it in the absence of any other reliable source of potable water. During my tenure I could not replace the corroded pipes, nor could I ensure a reliable supply of drinking water to the village, and I consider these as my biggest failures as sarpanch.

But my struggle to bring clean and sweet drinking water to my village is far from over. These days, I and other women from the village make regular trips to the district administration offices and place our demand for potable water before them. We have also submitted a proposal that says a booster pump can be placed at the canal flowing by Gohana to provide fresh canal water to Hassangarh. I don’t know when this will become a reality, because in our society, the system of grievance redressal is still patriarchal.

I agree that the odds are still stacked against women voicing their opinion, and the decisions are primarily made by men. But women cannot remain on the sidelines if they want to see improvements in their lives.

(As told to Shreeshan Venkatesh)