Even as the dispute between Odisha and Chhattisgarh over Mahanadi river water has snowballed into a political fight, civil society organisations and water experts from across the country have come together to build an Inter-State Cooperation Framework 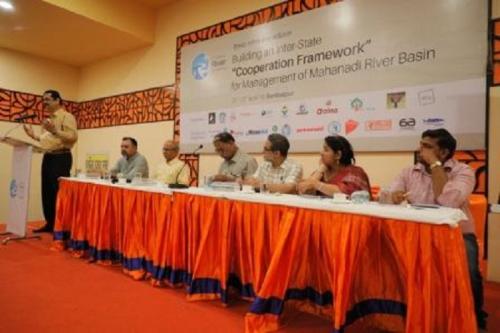 The 2nd Odisha River Conference, which is organised by the Water Initiatives Odisha (WIO) and Mahanadi River Waterkeeper, commenced today in Sambalpur. The theme of this two-day conference is 'Building an Inter-State Cooperation Framework for Management of Mahanadi River Basin.

Around 150 people from basin communities such as farmers and fisher folks participated in the programme along with civil society representatives, river and water experts and academicians from across the country.

Addressing the gathering, Ranjan Panda, convener of WIO said, “There has been a lot of politics and inter-state river water conflicts in the country. But in the process of fighting, let us not allow the rights of the river as an ecological entity to be snatched. While the dispute between Odisha and Chhattisgarh is rife, it is unfortunate that both the states are treating Mahanadi as a commodity, not a natural resource.”

“No doubt Chhattisgarh has constructed many dams and barrages without the consent of Odisha and has obstructed lot of water, but that does not mean we can conclude that Chhattisgarh has siphoned off water from Odisha’s share. We need a comprehensive understanding and analysis of the impacts all these structures will have on availability of water in the basin. Let the tribunal decide how to make such an analysis and instruct Chhattisgarh to stop these obstructions if they are found to be illegal. But, let’s not close the door of dialogue and cooperation between the two states on several issues that need urgent attention. Barrages alone are not killing Mahanadi, there are many other factors that need urgent intervention,” Panda said.

He pointed out that “Our concern should be on how to rejuvenate the ecological entity of Mahanadi. The two states should come together to solve Mahanadi problem. Changes should be brought in the laws at the national level to establish the rights of communities over river and the river’s own rights.”

Vice-Chancellor of Sambalpur University Prof Deepak Behera, who was the chief guest on the occasion, announced that a research project dedicated to Mahanadi will be initiated in the university. The project will not only be limited to the university lab, it will involve field-level work as well. He added that a proper assessment of water availability and distribution between different priorities is important to understand the challenges as well as suggest measures to solve them. He emphasised resource mapping involving communities of the basin to ensure their stake on the river.

Prof Premanand Panda, who chaired the inaugural session, said while seeking a solution to the Mahanadi problem, we should not have an Orissa-centric approach but a river-centric approach. He added that rights of a river can be established when people are empowered to use water judiciously. He maintained that water rights is a part of human rights because when a river dies a civilisation dies with it. He explained the statement while drawing examples from across the world.

The two-day conference will debate on issues like rights, governance, climate change, disasters, water security and pollution in six technical sessions, two general sessions and a community conclave. The conference aims at starting a process of formulating and will come up with a set of recommendations for survival, rejuvenation and conservation of Mahanadi and other rivers.

(The press release was issued by the Water Initiatives Odisha)