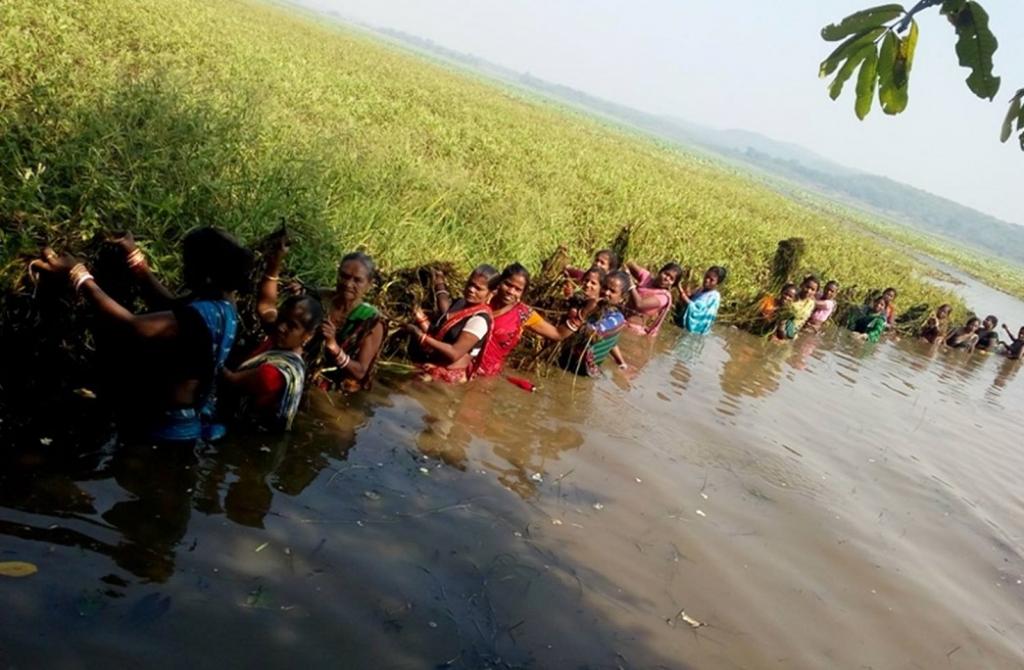 Around two tonnes of weeds was extracted and used as compost for the crops. Credit: Goonj

Ansupa, the only freshwater lake of Odisha, is also one of the largest freshwater lakes in Asia. But lately, it has been dying a slow death. This horseshoe-shaped lake on the left bank of the River Mahanadi in Cuttack district has dried up and is filled with silt and filth much due to the apathy from the state government. Over the years, the lake lost its tourism potential as weeds gradually took over it.

Earlier, flood water from the Mahanadi used to enter Ansupa lake through a channel called Mayurinala, clearing the weeds in the process. But the natural de-weeding process stopped as the channel was deactivated due to the raising of Mahanadi embankment after the 1982 and 1985 floods.

Huge amount of sand, soil and debris-mixed rain water from the Saranda hill (western side) and Gunjar hill (north-eastern side) filled the lake with silt. The water level of the lake has reportedly reduced from 20 feet to eight feet.

When Goonj, a Delhi-based NGO that undertakes disaster relief and community development work across the country, met Kadambini and Balunkeswara women self-help groups (SHGs), they were looking for alternate sources of sustainable income. Since the lake was earlier a tourist spot with boating facility, the women were encouraged to clear the weeds themselves and revive boating facility as a source of income.

“The government, under some agreement, had given the SHGs four boats to run in the lake. However, making the boating system operational amidst weeds was difficult. Now the boating work is managed by Kadambini women SHG and till date their profit is Rs 30,000, out of which they will have to give 25 per cent to the government for repair and maintenance of boats,” says Meenakshi Gupta, co-founder of Goonj. 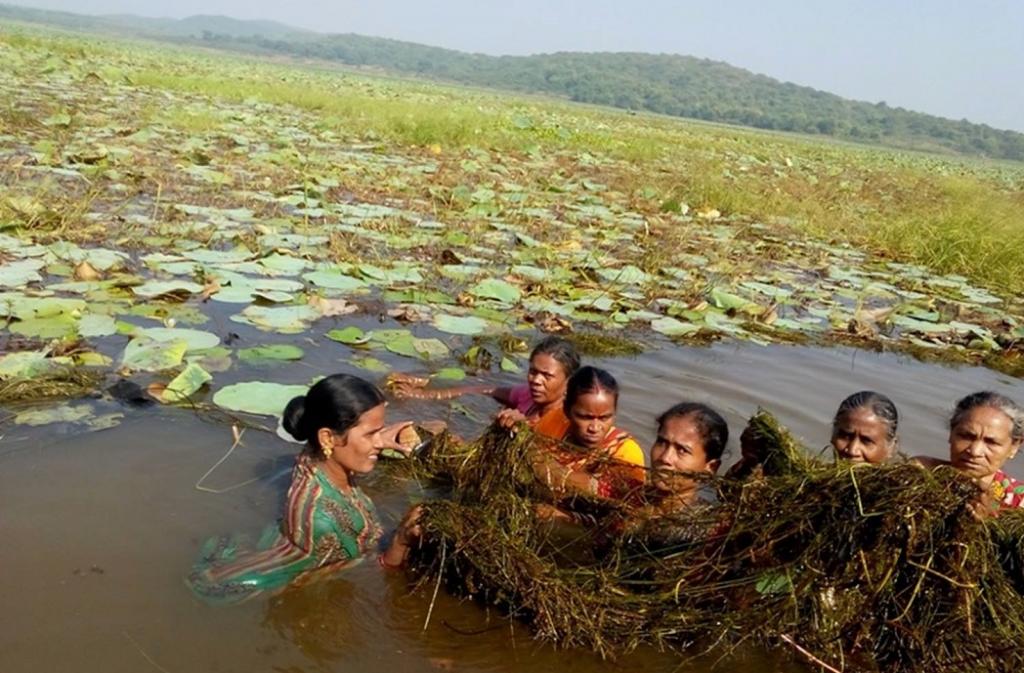 “The lake was left unattended as an orphan for at least a decade with nobody realising its tourism potential until some migratory birds started to come,” says Piyush Ranjan Rout, an urban planner in Bhubaneswar. “In a way, we are fortunate that the lake is not located in an industrial belt, and it is only years of neglect that caused silting,” adds Rout.

Under the Cloth for Work initiative steered by Goonj, about 30 women from Malabiharpur village took up the task of cleaning 2,000 sq ft area of the lake. Despite being the peak of winter, the village women got into the cold water to clean the weeds. The cleaning was done in two phases: November 20-28 and December 15-18. 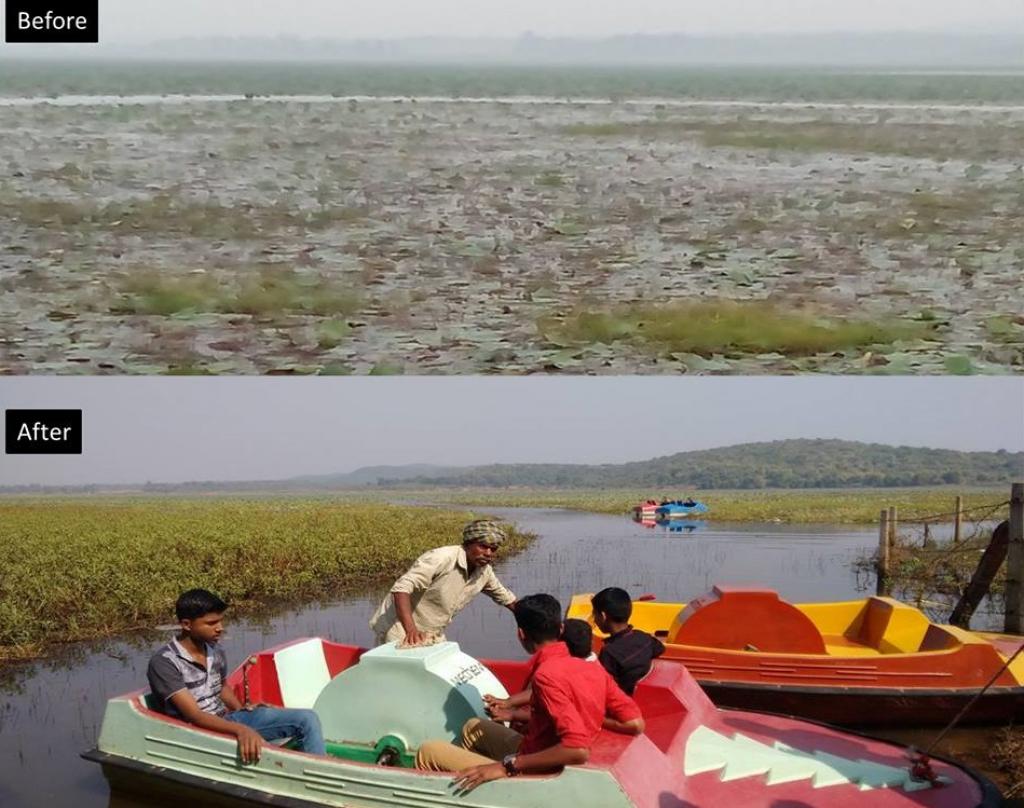 Around two tonnes of weeds was extracted and used as compost for the crops. As a reward, tarpaulins and tent house material were given to the village women, which they can give on rent to generate income.

Suresh Kumar, a senior member of Goonj who was involved with this initiative, says, " It was amazing to see the spirit of these women. Even in the cold they kept at the work with full enthusiasm. They are planning to take up many other income generation activities with the material they received from Goonj."

The first tourist season yielded Rs 15,000 revenue for the SHGs and they hope to make Rs 50,000 – 60,000 in the coming season, thanks to the cleaning of the lake and revival of boating. The initiative, which started with cleaning a lake, is now having a ripple effect.

Anshu Gupta, founder of Goonj, says "The story of women who cleaned up a lake in Odisha to create livelihood for themselves under Goonj's Cloth for Work initiative is symbolic of the strength and can-do attitude of the entire rural India. It's time the rest of the world understood and valued this as well."

It is only in December 2016 that the Odisha government approved the action plan for development of 30 ecotourism spots with a total cost of around Rs 21 crore and Ansupa lake is one of them.