Several residents in district's Sathankulam block have shifted to nearby cities

The name of the village was corrected to Padukkapathu from Pudukkapathu. The story was first published on March 5, 2020.

According to residents, saline water incursion prompted many farmers in the district’s Sathankulam block to shift to cities such as Chennai, Madurai and Combaitore for work. Many started their own business.

Until the early ’90s, coconut farming was the main source of livelihood for the population of the district. Troubles began in 1994, according to GP President Sarvanan.

Use of groundwater for irrigation made farming vulnerable to salt water incursion from the sea three kilometres away. Pumping groundwater led to a drop in its level. Decreased rainfall over the years reduced water pressure, allowing salt water to intrude into fresh water. 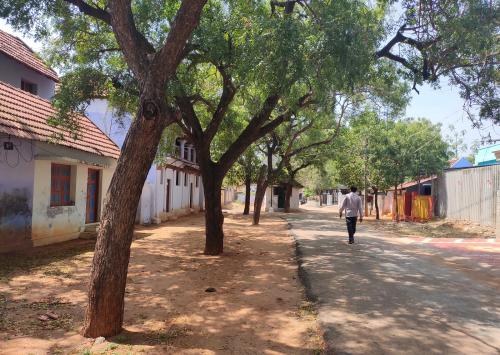 Villagers recalled the time when the market bustled with small eating joints catering to those who came to work there. “Now, it’s difficult to find a tea stall,” said T Sivagurunatham, a resident.

“People who left come back during festivals. Not much is left in this village,” said S Sagapthin, also a resident. Only 10 of the 30 houses on his street are occupied.

The district collectorate is 70 km from the village and the block office about 18 km away. The distance, Sarvanan said, was also a reason the GP has been neglected for long.

A Central Ground Water Assessment report of 2017 termed Sathankulam block in the district ‘semi-critical’ in terms of groundwater.

The block is one of the driest areas in the state, which made agriculture an unviable practice there, said S Samuel Asir Raj, head of department of sociology, Manonmaniam Sundaranar University.

“But with free electricity scheme and advent of tubewells in the 1970s, villagers could give agriculture a try. With this, exploitation of groundwater also intensified. Earlier, there were only palm trees. Toddy and sugar cultivation was the main occupation,” he said.

He added that groundwater was semi-saline even before agricultural activities started. As groundwater exploitation intensified, less water pressure allowed sea water to ingress at a much faster pace.

Long ago, the state government had promised to release water from Manimuthar dam, 80 km from the block. However, because the area was never recognised as agrarian, the water was not released efficiently, Raj said.

This was not it. An invasive species Prosopis Julifora (locally known as Karuvelam) — that suck groundwater and inhibit growth of native species — were planted in the 1960s to overcome firewood shortage. This also contributed to groundwater depletion. Sathankulam was among the worst hit.

In 2016, the Madras High Court ordered its removal across the state. But it was later stayed.

Brothers K Sittampalapanti and K Sittampalam are among few farmers left in the village. The number of coconut trees on their 25-acre farm dropped to 400 from 1,500 within a couple of years. 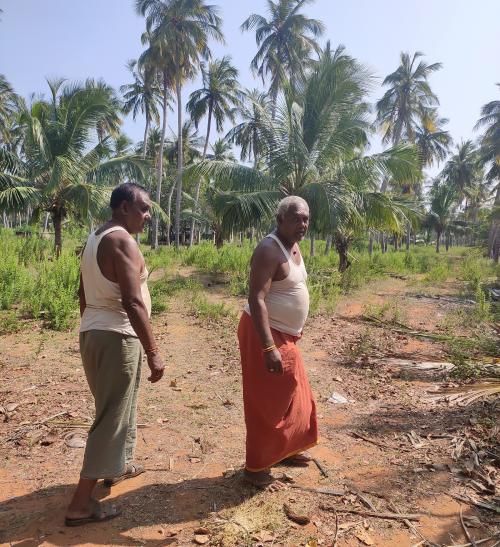 Sivagurunatham, a farmer, said: “Trees don’t grow big anymore. The size of the coconuts, too, has shrunk. Earlier, one big coconut would weigh a kilogram. But now, six to seven smaller ones make one kg.”

The situation gets a little better in October, November and December, when the district receives rainfall.

According to villagers, connecting the Kannadian channel of Thamirabarani river to the village block could offer some respite.

“The surplus rain from the river that flows into the sea will come to villages in the block, filling small ponds. That, in turn, will recharge groundwater in and around 15 km,” said Sittampalapanti.

Usually, even as Thamirabharani river overflows during surplus rainfall, irrigation channels and water recharge structures in these panchayats remain dry. This is often attributed to poor water management.

Thamirabharani is the only perennial river which originates in Tamil Nadu. Its water is used for irrigation in Thoothukudi and Tirunelveli districts.

Widening the Sadaineri extension channel — a flood water carrier which fills Puthantharuvai tank in the block — could also offer respite.

Between July and September 2019, seven structures — including check dams, bunds, and recharge shafts — were built in the village to recharge groundwater. But their utility remained scant due to less rainfall. No work under the JSA has been undertaken to check salinity, villagers claimed.

“Rainwater doesn’t stay for long. It gets absorbed in about 30 minutes,” said Muthuselvam, a coconut farmer.

Villagers also said Padukkapathu GP did not consider individual works under JSA — such as construction of individual check dams or farm ponds for farmers.

“Under such exercises, the focus is to build structures at minimal cost,” said Sarvanan.