Nature-based solutions to water can work in some places, but on the whole they face serious limitations 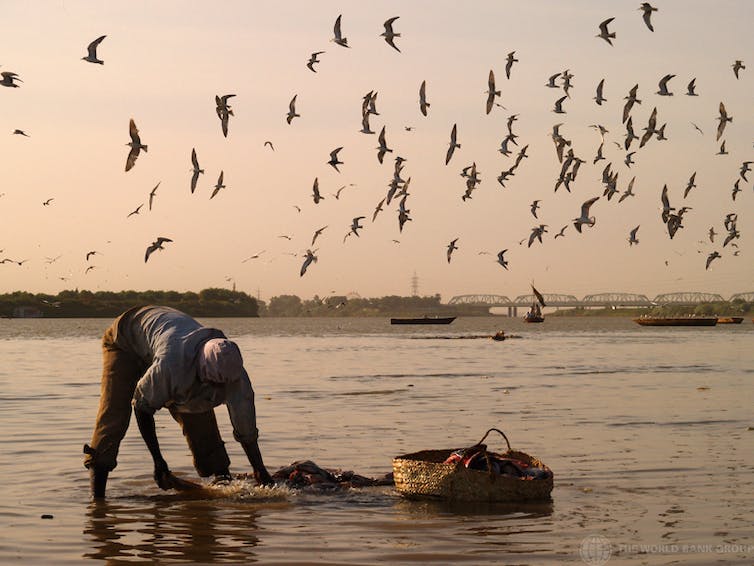 A fisherman at work in the White Nile. Half the river’s flow is lost to evaporation from the Sudd swamps, a large wetland. Arne Hoel/World Bank/Flickr, CC BY-NC-ND

Each year UNESCO releases a World Water Assessment Report, a document that explores potential solutions to the globe’s water problems. The 2018 report will focus on nature based solutions.

The authors suggest that this approach will address contemporary water management challenges across all sectors, and particularly regarding water for agriculture, sustainable cities, disaster risk reduction and improving water quality.

It would see the use of “ecosystem services” from the natural environment to provide water supplies and water purification. For example, some of the proposals in the report, with which I have been engaging since 2015, include relying on wetlands to store and purify water rather than building dams and treatment plants.

Although they are attractive, these nature based solutions are not the ‘green bullet’ that will solve the world’s water problems. They can work in some places, but on the whole they face serious limitations. These include the fact that they often require lots of land and compete with farming and housing for space.

On top of this nature based solutions may actually be harmful. They can reduce the amount of water available for human use and contribute to climate change. They may even fail during extreme droughts or floods.

Lastly, they simply cannot respond to the pace at which developing countries are growing and the water requirements and challenges that come with this. This means that nature-based approaches will do little to meet the African continent’s needs.

Take the “Working for Water” programme. Established as a national Public Works Programme in 1995 its aim was to make more water available by cutting alien trees, which are said to consume a great deal of water. Hundreds of millions of rand have been spent around Cape Town as part of this programme. It’s created tens of thousands of short term public works jobs – but provided no relief from the drought.

Another solution that is being implemented is to reuse some of the wastewater the city currently dumps into the sea. This has to be carefully purified. One way to do this would be to use natural purification in large sewage treatment ponds. But land is scarce and there is not nearly enough open space available. Instead, conventional mechanical treatment infrastructure will be needed.

Value in some contexts

This is not to say that nature based solutions have no value – in the right context.

For instance, it makes sense to recharge the groundwater on which many communities depend if there is an opportunity to do so. This approach is being proposed in the report in place of new dams. In the US some states that have large “aquifers” do this regularly. They effectively manage underground storage in aquifers as a dam, pumping water in when they have surplus and extracting it again when they need it.

In Windhoek, Namibia’s capital, the local aquifer whose springs attracted German colonial settlers is now being used to provide additional storage to help the city to survive during its frequent droughts.

But, as the Windhoek case shows, even supposedly natural solutions need an infrastructure of pumps, pipelines, recharge wells and reservoirs. They also require large areas of the city to remain undeveloped so that the underground water is not polluted by people living above it.

So these “natural” methods remain an attractive option for smaller towns; the challenge for larger cities is often their extensive land requirements.

Proponents of nature-based approaches also often fail to recognise their down-sides. Sustainable urban drainage, for instance, uses grassy areas and permeable pavements to slow the flow of storm water and allow it to soak into the soil. While some may recharge groundwater, much is lost to evaporation and so reduces the flow of water into rivers and dams.

In South Africa, only around 8% of rainfall actually reaches rivers and dams. Reducing that flow will actually reduce the amount of water available for use and increase water scarcity.

Similarly, while proponents of nature based solutions make much of the ability of wetlands to store water and release a small and steady flow after a flood, they also lose large quantities of water through evaporation. 94% of the Okavango River, southern Africa’s third largest, is lost to evaporation in this way from Botswana’s Okavango swamps, as is half of the flow of the White Nile from the Sudd swamps of Southern Sudan.

Wetlands also aggravate the problems of climate change and accelerate global warming. They are the largest single emitters of methane, a potent greenhouse gas which is driving global warming. More methane is generated by wetlands than from all human sources – and this is expected to increase as the earth warms.

The real problem is that the nature based approaches originated in the context of Europe and North America. These regions have already built many of the infrastructure systems they need, from dams and pipe networks to wastewater treatment works. They do not have Africa’s huge infrastructure deficit.

Rich country populations are static. With their basic needs now met, they seek to improve the quality of their environment. But developing countries face a completely different kind of challenge. As an example, by 2050 sub-Saharan Africa’s urban population is expected to increase by 720 million people while Europe’s will grow by just 36 million.

So, while some nature-based approaches may be relevant, the reality is that they will make only a small contribution to the large challenges that the developing world must address.