It is almost a month since the normal onset date of the monsoon, and headlines have been dominated by situation of drought and water scarcity over large areas of the country. Under the circumstances, it is a matter of serious concern that many thermal power plants — heavy water guzzlers and the largest industrial user of water — are failing to comply with the legally binding limits on how much water they are allowed to use.

This situation has been revealed by information obtained under the Right to Information Act (RTI Act) by Manthan Adhyayan Kendra.

Background and Significance of the Norms

Coal-based thermal power plants (TPPs) consume vast quantities of accounting for close to 70 per cent of all water used for industrial purposes in India. Given this, thermal power plants can cause significant water stress in the local area, especially if they are present in clusters.

In December 2015, the Union Ministry of ENvironment, Forest and Climate Change (MoEFCC) brought out a notification that set limits for the first time on how much water a thermal power plant can use per unit of electricity generated, called 'specific water consumption'. These regulations mandated that TPPs set up before January 1, 2017, should not use more than 3.5 Cubic Metres / MWh of water (equivalent to 3.5 litres of water per unit (KWh) of electricity generated) and those built after the date cannot exceed 3 Cubic metres/MWh. Power plants using sea water are exempted from this, and all plants had to meet the norms within two years of the notification, that is, by December 2017.

The Central Electricity Authority (CEA) had noted in a report in 2012 that TPPs were consuming 5-7 Cubic Metres/ MWh of water. Every reduction of 0.5 Cubic metres/MWh in the specific consumption of a 1000 MW plant will save enough water in a year to irrigate 700 ha of land; or provide drinking and domestic use water to 68,000 people for an entire year. Thus, the cutting down of water consumption by TPPs has huge benefits for the local areas especially in water-stressed areas.

We could obtain compliance status (self-reported) for thermal power plants or units from 12 states. Just about 51% of the plants were found to be in compliance with the regulations.

Out of the total 156 plants/ units for which we could obtain the status, 66 claimed that they complied with the water consumption limits, while 30 admitted that they were non-compliant. For another 46 plants, either data was not available, or replies were ambiguous or the plants were closed. As other 14 plants were using sea water, they are exempted from the regulations.

What is equally important is that this compliance status is self-reported status by the various power plants. These figures or status have not been verified either by the state pollution control boards (SPCBs) or any other independent agencies.

These 156 plants included a number of smaller, captive power plants. If we consider only the major power plants (those being monitored by the Central Electricity Authority in its Daily Generation Report or DGR list), then the number of plants for which we could get information was only 75, and in this 34 plants were compliant with the norms and 22 were not.

An overall picture of all states taken together, for TPPs in the DGR is given in Figure 1 and details in Table 1. 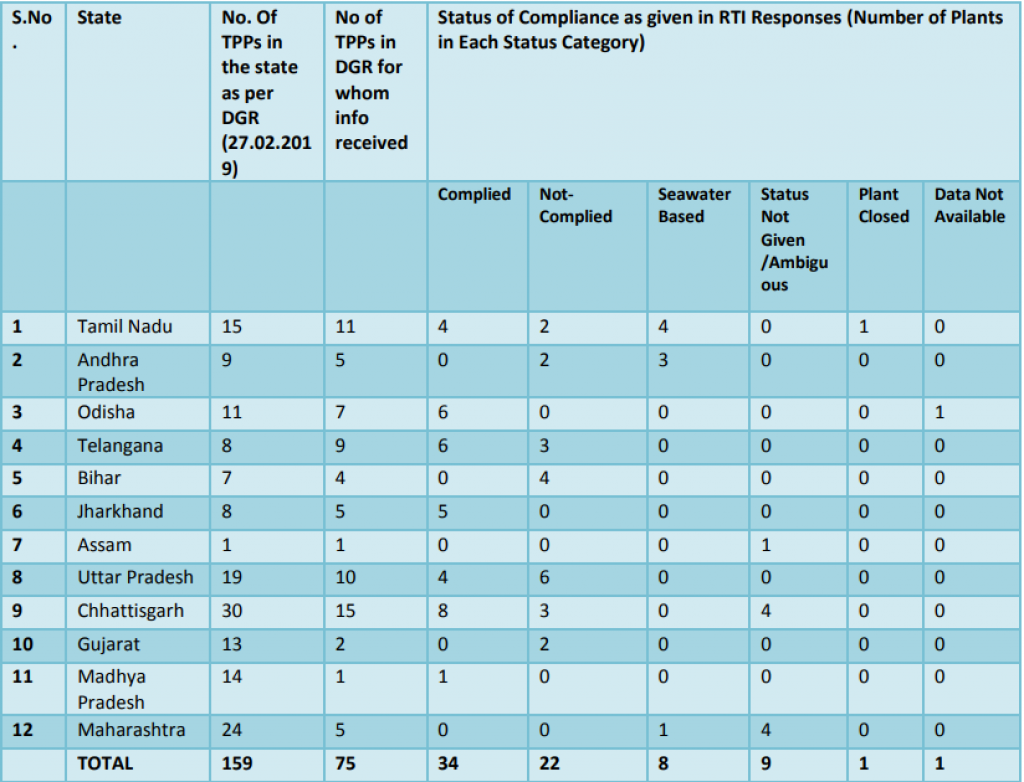 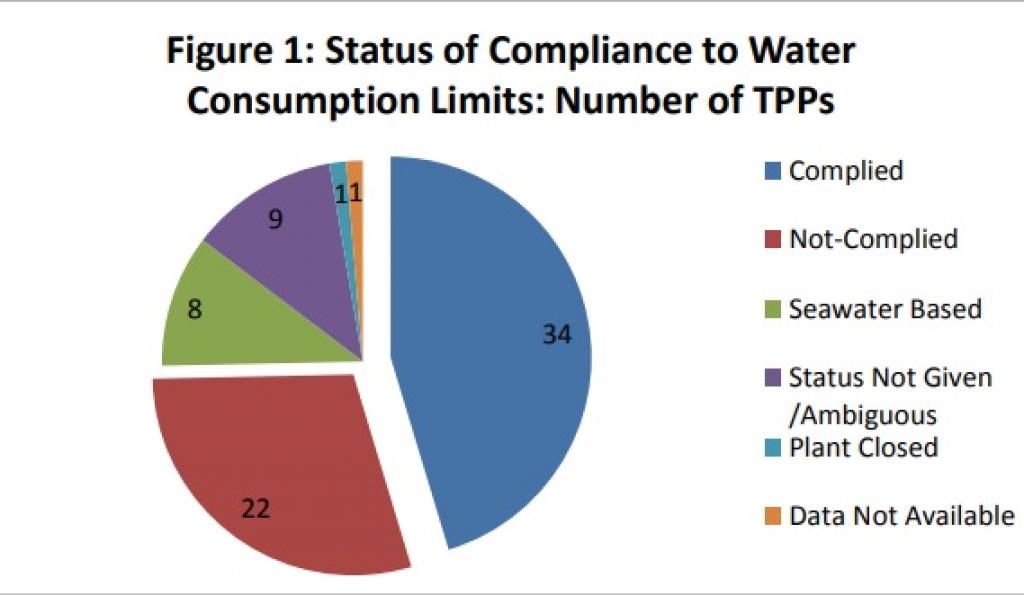 Issues of Concern with Compliance Information

There are other serious issues of concern with the compliance data and information we received under the RTI applications.

Self-Reporting, No Independent Verification:  The status of compliance with the regulations of water consumption is entirely self-reported by the respective power plants with no verification from any credible, independent agency.

Some States Gave No Information, Most did not Give for All Power Plants: Out of RTI applications filed with 15 states, we did not get information for even one TPP from three states — Bengal, Karnataka and Rajasthan. Most states did not give information about all the TPPs in the states, leading us to wonder whether the states are actually monitoring compliance by all the plants or just passively collecting information from whichever plant submits it, and ignoring others.

No Uniform Format for Information Given: There was no uniform format in which the information was provided to us in spite of the fact that there is a prescribed standard format for reporting compliance with the regulations.

Information Given is Old in Many Cases: In many cases, the information provided to us was several months old, or even from earlier years, raising the question as to whether the collection of compliance information is being done on a regular basis.

Lack of Seriousness in PCBs to Ensure Implementation of Norms

Neither the MoEFCC, nor the state pollution control boards (SPCBs) which are responsible for monitoring the compliance with regulations, seem to be serious about enforcing the norms.

The compliance monitoring figures are not in public domain. The only action that SPCBs seem to be taking in cases of non-compliance is to write to the plants to comply.

Futher, CPCB / MoEFCC have tried to allow the thermal power plants an open ended extension of time period to meet the standards in a manner that is legally questionable. Just as the deadline to meet the norms ended on 7 Dec 2017, the CPCB wrote, on December 11, 2017, to all power plants, stating among other things that “the time line for compliance of water consumption limit shall also be finalised in consultation of plants.” This is not only a patent conflict of interest situation but provides an ideal opportunity for rent seeking. Not only that, the time limit for meeting the norms is open-ended, but also there is no time period given by which the deadline has to be set. This effectively makes it an open ended exemption to the plants, making the regulation meaningless. Given this, the CPCB letter’s legality is questionable. As such, the legality of these directions is also being questioned by lawyers, as they claim that the powers delegated to CPCB cannot be used to extend deadline but only to ensure compliance.

1. All SPCBs and the CPCB must ensure that all TPPs meet the water consumption norms given in the Dec 2015 Notification with immediate effect, as the deadline has long passed.

2. Without prejudice to (1) above, where new deadlines are needed, the respective SPCBs must immediately set them and make them public. In any case, these deadlines should not be beyond Sept 2019.

3. All SPCBs should collect the data related to compliance with these water consumption norms in a regular manner.

4. Such data should be in the uniform, prescribed format for all TPPs no matter in which state.

5. All this data along with the compliance status should be put out suo moto in public domain.

6. Compliance can be self-reported, but verification by independent credible agencies and the SPCBs is a must.

7. SPCBs should initiate action against those not meeting regulations, and put that in public domain so that local communities can follow up.