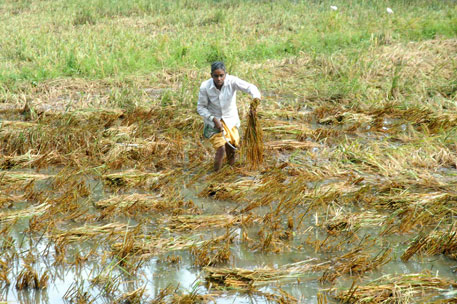 Lehar, a very severe cyclonic storm that formed over west-central Bay of Bengal, weakened into a depression and crossed the Andhra Pradesh coast close to Machillipatnam at 2.15 pm Thursday.

The cyclonic storm was initially predicted to be a very severe storm that would cause extensive damage. But by Wednesday evening, the storm started weakening and by Thursday morning it became a deep depression.

When the depression crossed the coast, it had a wind speed of 30-40 km/hr. The initial prediction was that the maximum surface wind speed could be as high as 170-180 km/hr, gusting up to 200 km/hr.

In the open sea, Lehar was seen as intense as Phailin, a very severe cyclone that struck south Odisha coast on October 12 this year. “Winds blowing from central India, the low winter temperature of water near the coast and wind shear had resulted in Lehar weakening,” says G Sudhakar Rao, scientist and director in-charge of the meteorological department at Hyderabad. “ We had expected this but we cannot take risk since there is no certainty about whether the cyclonic storm will lose its intensity while approaching the coast,” says Rao. Phailin did not have favourable conditions for weakening, he adds.

Not wanting to take chances, government agencies continued with preparations for facing a severe cyclone. Despite the storm losing its intensity, the coastal areas were on high alert. More than 45,200 people were evacuated from south of Machillipatnam. Thirty teams of the National Disaster Response Force and 450 personnel of the State Disaster Response Force had been deployed for rescue operations. The state had opened more than 100 relief camps. There was high alert in the coastal areas that could be inundated in heavy rains following the cyclone.

"No damage has been reported," informed C Parthasarathi, commissioner, state disaster management department. A few places on the coastal areas got moderate rains. Some low-lying areas, especially in East Godavari district, got inundated. Since the sea turned rough, fishers have been advised not to venture into the sea for some more time.