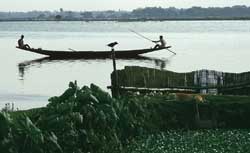 The Eastern Link Highway, as it is to be called, will be connected to the Haldia port by a bridge over the Hooghly river. Ten "mini-townships" comprising clusters of commercial complexes with resorts, shops, motels, food courts and gas stations, are proposed along the route. Bhattacharjee hopes the road, which will require the acquisition of roughly 1,000 hectares (ha), will be completed in two years.

The highway was initially proposed in 2004 as a 60-km "outer ring road" for the city and a "highway backbone" for Bengal, providing an unbroken link between the north and the south. State leaders see the road as an immediate requirement, given the city's recent phenomenal growth along its eastern fringes. The plan was to start the highway from the Barasat Bypass, run it past Rajarhat township and behind the Calcutta Leather Complex and have it meet the National Highway 117 at Shirakhol. From there, it would branch off, with one fork leading to Raichak and the other terminating at Falta.
Government officials say the actual route of the highway hasn't been mapped yet, but ecologists familiar with the geography of the area say it's unlikely such a road can be built without cutting through the East Calcutta Wetlands -- supposedly a protected Ramsar site (the Ramsar list contains all internationally significant wetlands) -- and disrupting its fragile ecosystem. They also fear the road which will pass through much undeveloped open land, will spur rampant unplanned growth along its route, as has been seen along the vip Road in north Kolkata, and the southern half of the Eastern Metropolitan Bypass. They're therefore demanding the state make the proposed highway route public before finalising the project.

"I'd like them to show me how they are going to map the road without flouting the Ramsar convention," says Dhrubajyoti Ghosh, former chief environment officer of the state who was instrumental in getting 12,500 ha of the wetland area listed as an internationally protected site in 2002. Ghosh was also joint director of the state planning board in 1985 when the wetlands area was mapped. "If the road indeed goes through the wetlands as we are suspecting, then God alone can save the wetlands," he said.

The highway could, in the long run, raise a stink in Kolkata. Literally. If the wetlands' ecological balance is affected, the city would lose its natural, and only, sewage treatment plant.

The Kolkata Municipal Corporation (kmc) area generates roughly 600 million litres of sewage and wastewater everyday and more than 2,500 tonnes of garbage. The wastewater flows through underground sewers to pumping stations in the eastern fringe of the city, and is then pumped into open channels. kmc's responsibility ends with taking the wastewater to the outfall channels and dumping the solid waste at designated sites in the wetlands. Thereafter, some 254 sewage-fed fisheries, agricultural and solid waste farms in the wastelands take over.
The wastelands comprise a large number of water bodies spread across the districts of North and South 24-Parganas.Its unique ecosystem uses wastewater in fisheries and agriculture and in the process purifies it to a standard pretty much equal to many urban secondary level treatment plants (The garbage dump areas are used to raise a variety of vegetables. The city receives about 150 tonnes of vegetables daily from these 'garbage farms'). The resource recovery system developed by the local people over many years using wastewater from the city is the largest and the only one of its kind in the world. Ghosh estimates the wetlands save the city about Rs 400 crore in capital expenditure and recurring maintenance cost on water treatment plants. Besides, agriculture and aquaculture in the wetlands provide significant income for sustaining livelihoods of thousands of families living in the area.

According to a recent study by Kolkata-based economist Gautam Gupta, the wetlands generate a value of Rs 92.45 crore per year and provide income (Rs 2,000-Rs 3,000 per household per month) to sustain livelihoods of poor residing in wetlands. Apart from this, the wetlands are also home to waterfowl and a large biodiversity.

The wetlands, it's obvious, are crucial to Kolkata's survival.


The idea behind the highway proposal -- to connect special economic zones and ports to the north and south of Kolkata by a road that skirts the city, avoids traffic congestion and speeds goods traffic -- may be sensible. Especially given that Barasat is on the chief trade route to Bangladesh across the Petrapole-Benapole border, the proposed chemical hub at Haldia and projected growth along the corridor and up north in Bankura and East and West Midnapore districts. But its actual socio-economic cost in terms of its impact on the wetlands may be too high for the state to bear.

Sukanta Chaudhuri of Jadavpur University, who has studied the road systems in and around the city, says the Barasat-Raichak highway will split the wetlands ecosystem into disparate fragments and it won't be long before the unviable bits disappear. "I don't know how it can be built without splitting up the wetlands," he says. "To avoid that either you'd have to go into the city or go south-east and no matter how east or south you go, you're bound to touch the wetlands. I even doubt if they can do it technically avoiding areas within the Ramsar site." Chaudhari suggests the state look at alternate means of connecting Haldia and Barasat. Such as, a corridor through Howrah district, since Barasat is already linked to Howrah via a bridge at Bally and will soon have another link via the Belghoria expressway, which is nearing completion.

However, state officials insist the proposed highway will not harm the wetlands. They say it will skirt the wetlands by 2-3 km and no water bodies will be encroached upon. "Wherever the land contours are low we will have culverts and bridges, the waters will not be divided, nor will the flow of wastewater from west to east be impeded," says Netai Kundu of the state-run Institute of Wetland Management and Ecological Design. "There will be no heavy industry close to the road that will cause pollution, only information technology industries and housings." He said the state was yet to complete an environmental impact assessment of the proposal. A proper plan for the expressway should be ready by September.

No respite for the wetlands, is what it all translates into.