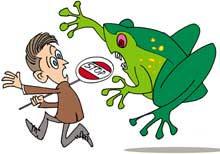 Western Australia has now sought the help of its military force to stop invasion of toxic cane toads (Bufo marinus). In the absence of any natural predator these poisonous amphibians are growing in number and killing indigenous insects and animals.

The Queensland government has already written to its federal counterpart in Canberra, seeking permission to use troops as a first line of defence, as all attempts of the state government to fight the spread of the cane toad have failed. Cane toads were first introduced to Queensland from South America in 1935. The sugarcane industry had brought them to control two major pests of sugarcane, the grey-backed cane beetle and the Frenchie beetle, which were destroying sugar crops in northeast Australia (see 'Bio-control backfires', Down To Earth, April 15, 2006).