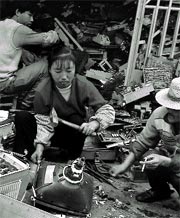 According to an investigation by bbc's Earth Files programme, computer waste is being dumped in developing nations in contravention of the Basel Convention. And the two most popular dump yards are India and China.

The Basel convention on the transboundary movements of hazardous wastes and their disposal came into force in 1992 and was ratified by 159 countries. According to it, companies cannot export defunct computer equipment without going through a government process which ensures that the waste be disposed of properly in the importing country. To investigate how things work in practice, Earth Files set up a false online identity posing as a western computer shop wanting to get rid of unwanted equipment. The probe yielded some interesting results.

Several Western countries have made it illegal to dump old computers in landfill sites. They have to be recycled -- a process that can cost several dollars per computer. But some companies choose a cheaper option -- exporting them to developing countries. Earth Files went to Seelampur in Old Delhi. The area, it discovered, consisted of a lot of household industries; copper extracting units, computer-dismantling units, metal recycling units and so on. And most people used one of the rooms in their homes as a dismantling place. Some of the processes used to extract metals involve concentrated acids, while plastics may be simply burnt. The entire business is dangerous because workers handle poisonous components such as lead, cadmium or arsenic without using safety equipment.