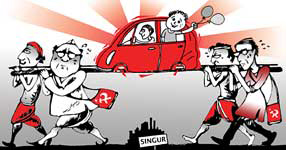 the saga of Tata Motors small car project at Singur, West Bengal, took a twist on September 23. There were reports in the media that the company had begun rolling out of the state. It was also reported that the West Bengal government was resigned to the state losing the project. Tata Motors, it seems, has kept up its threat of moving out of West Bengal if protests against the project continued. Opposition to it notwithstanding, Tata Motors had indeed got a sweet deal in West Bengal numerous subsidies would have fuelled India's cheapest car. At the time this magazine went to press, it wasn't clear if the deal was off.

But let's go back to September 12 to understand how favourable the Singur deal is for Tata Motors.On that day the Calcutta High Court restrained the state government and the West Bengal Industrial Development Corporation (wbidc) from making public the 'secret' part of the agreement they signed with Tata Motors on the Singur project. The company had taken the West Bengal government and its industrial body to court after wbidc posted the text of the 'general' agreement on its website on a direction from the state information commission. The commission had received a Right to Information (rti) plea for such disclosure.

Tata Motors' lawyer argued before the court that the state information commission had violated the rti Act, 2005 by asking the state to display the agreement. Section 11(1) of the act says that when a third party--other than the rti petitioner and the government--is involved, a submission from it is needed for any information to be revealed. The company's lawyer also argued that the agreement between the three parties was a trade secret and could not be put in the public sphere. In effect, the company argued that the Nano project is a private commercial venture. In contrast, the state government had acquired land at Singur using an antiquated law--the Land Acquisition Act, 1894--that allows the state to take over land for 'public purpose'.

But what is in this 'secret' agreement that Tata Motors is afraid to divulge? It seems that the deal between Tata Motors and the West Bengal government involved much more than was made public by wbidc on its website. From it, one only gets a glimpse of the sops that the state government gave to Tata Motors. If there are more sops than that in the general agreement, then the company may have got away with the mother of all subsidies.


West Bengal government's subsidy package to Tata Motors includes subsidies on land, power, tax paybacks and a soft loan of Rs 200 crore. The state government will make efforts to maximize sale of products from the "Small Car Plant". The package, notes the agreement, is given to Tata Motors to match benefits it would have enjoyed in Uttarakhand and Himachal Pradesh, both designated backward areas with following central tax concessions 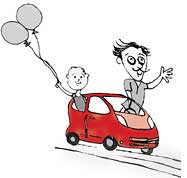 This tract was the bone of contention between the opposition Trinamul Congress and West Bengal government. Trinamul wanted this land to be given back to the farmers and wants the vendors of ancillary units to be relocated. The remaining 60 odd acres (24 ha) was earmarked for setting up the electricity substation and for the rehabilitation of the project affected persons.

Under the deal, Tata Motors will not pay for the acquisition of land for the small car plant. It will instead pay an annual lease rental of Rs 1 crore per year for the 645.67 acres for the first 5 years with an increase of 25 per cent after every 5 years till 30 years. After 30 years, the lease rental will be fixed at Rs 5 crore per year, with a 30 per cent increase every 10 years till the 60th year. After 60 years, the rental will be fixed at Rs 20 crores per year, which will remain unchanged till the 90th year, after which the lease terms will be fixed on mutually agreed terms.

Considering that wbidc is likely to spend anywhere between Rs 150 -200 crore to acquire the land in Singur and the going lease rental rate for the commercial space in Singur near the national highway (where the Nano plant is coming up) is upward of Rs 25,000 per acre per year, Tata Motors has struck a sweet deal. The company has not only got away from not paying the market value of land (if the company was to buy this land from the farmers directly the cost could have been between Rs 250 and 350 crore), but the lease rental it has been asked to pay is also highly subsidized.


The West Bengal government has agreed to provide subsidized electricity to the project. Though the going rate for the electricity is Rs 4.15 per kWh, the project will pay at the rate of Rs 3 per kWh. In addition, in case the tariff is increased by more than 25 paise per kWh in every block of five years, the government will provide relief to neutralize the increase. In other words, Tatas will get electricity at a constant subsidized rate for the entire life of the project. In fact, this deal in a way freezes forever the per unit energy cost of the Nano car.

It is estimated that it will take about 300 kWh to assemble one Tata Nano in Singur (it takes about 400-500 kWh to make small cars like Hyundai Santro and Maruti 800 and Maruti Zen). This excludes the electricity that the ancillary and component manufacturing units of Nano will consume. As Tata Motors plans to make 2,50,000 cars per year initially, the electricity subsidy offered to the company could be to the tune of Rs 10 crore annually for the assembly plant alone. If the same subsidy is being offered to the vendors as well, which is not clear from the general agreement, then the total energy subsidies will increase manifold.


According to the agreement, the West Bengal Government will provide Tata Motors a loan of Rs 200 crore at 1 per cent interest, repayable in five equal annual installments starting from the 21st year from the date of disbursement of the loan. This loan will be disbursed within 60 days of signing this agreement (The company signed an agreement with the government on March 9, 2007 for the land at Singur).

The loan writes off about 15 per cent of the capital investment that the company purports to make in Singur. By the time Tata Motors starts repaying the loan in the 21st year, it will essentially repay only about Rs. 240 crore to the West Bengal government, though at 11 per cent interest rate the future value of the present Rs 200 crore in the 21st year would be around Rs 1,450 crore. So Tata Motors in 20 years will avail a subsidy of about Rs 1,200 crore.


To match the excise duty and corporate income tax exemptions of Uttarakhand, wbidc has agreed to provide an industrial promotion assistance in the form of a loan to Tata Motors at 0.1 per cent interest per annum for amounts equal to gross value-added tax and central sales tax received by the state government in each of the previous years ended March 31, on the sale of the small car from the date the sales begin.

This benefit, says the agreement, will continue till the balance amount of the Uttarakhand benefit (after deducting the amount from the land lease rental and the soft loan) is reached on net present value basis. The loan with interest will be repayable in annual installments starting from the 31st year of commencement of sales.

The loan availed of in the first year will be repaid in the 31st year and wbidc will ensure that this loan is paid within 60 days of the close of the previous year, failing which the corporation will be liable to compensate Tata Motors for the financial inconvenience caused at the rate of 1.5 times the bank rate prevailing at the time on the amount due for the period of delay.

Is Tata Motors moving out of West Bengal for an even better deal?