Why green projects in India are hot favourite of international NGOs? 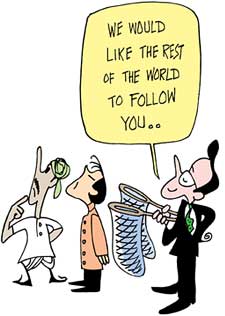 Sifting through the pile of letters from organisations announcing news conferences, my attention was drawn to one that claimed the group would be setting up a major initiative in India to help bypass polluting and inefficient technologies and create more green jobs and a green economy. The letter was from Sierra Club, a us -based ngo. What, in effect, it proposed to do was help India leapfrog high-carbon emitting technologies and yet be on the road to development adopting technologies that draw from renewable energy sources. A noble intention, but easier said than done. Intrigued as to what prompted an organization to make such preposterous claims, I decided to go to the press conference anyway, since climate change was my beat.

Without much ado, Carl Pope, executive director of Sierra Club, made the important announcement a Green Energy and Green Livelihoods Award of us $100,000 to recognize outstanding environmental success in India by grassroots level civil society organisations ngos, cooperatives, small business and labour unions. And the winner of the first such award will be announced in early 2009 in Mumbai.

Pope also announced the setting up of a Centre for Green Livelihoods in India in partnership with other civil society organizations to explore other ways of creating a robust dialogue on developing a green economy. Simply put, this centre will bring together various ngos and explore how green jobs, which lead to a green economy, can be created in India. Apart from all this Sierra Club will also network, collaborate and share information. Sierra Club, informed Pope, had started a similar exercise in China.

There it goes again. It is always India and China that are the two emerging villains of climate change. The developed world has built their infrastructure and created wealth, based on technologies that are high on carbon emissions. Even now, it refuses to deliver on its promise to bring down carbon emissions. Yet goes about patronising the developing world on the need for green economy.

To quote Pope The us has to get rid of old stuff and India has to create new stuff. The Sierra Club can help India make that transition...India does not have fossil fuel to run a carbon economy, so it should leapfrog to low- carbon economy and switch to renewable sources such as solar, wind power, etc. And all this is available in plenty in India.

By the same logic, California should be leading in the switch to green technology as it has plenty of both sun and the sea. If switching to a low-carbon economy was indeed so simple, what was keeping the industrialized world from making the transition?

Next, it was the turn of Sunil Deshmukh, an nri, who moved to the us 30 years ago. But, he proclaimed from the dais, his heart was in India. He was therefore committed to see India make the transition. India gets extremely good sunshine and also has huge potential to tap wind energy, so what is the problem? All the ingredients for a low-carbon economy are available in India, but what is needed is networking, which Sierra Club will facilitate. We will learn from you and provide a platform for sharing information and communication, said Deshmukh.

Deshmukh clearly has much to learn about implementation. On an earlier assignment that took me to far-flung villages in Jaisalmer, Rajasthan, I have seen solar lighting being provided, but there was no system for their maintenance and servicing. Villagers were not trained and it was not viable for government mechanics to travel all the way to rectify snags in one solar lighting system. Tariff issues and regulatory mechanisms needed urgent sorting out.

At the global level, there was much more that needed sorting out. Political will, for one. Pope claimed his organization was working on that front too in the us. Sierra Club acted as a watchdog to us policymakers. We are working towards pushing the us government to drop coal-based thermal power plants. It has already cleared 12 such plants. But we have stopped 50 such plants and are working towards stalling another 150 that are in the pipeline, emphasized Pope.

Since the us was the largest polluter, with the highest per capita carbon emission, it would make more sense to focus on Washington rather than on New Delhi or Beijing, I would have thought. But Sierra Club and its head thought otherwise India and China are big countries and if they shift to low carbon then the entire world will follow.