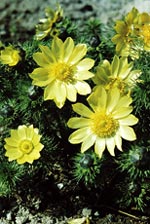 the multimillion-dollar trade in herbal medicines is threatening numerous plant species, as per a report of the World Wide Fund for Nature (wwf). "At least 4,000 to 10,000 plants are endangered. With demand increasing drastically, the future of these species is now more uncertain than ever before," says Alan Hamilton, the author of the report; the document is based on an analysis of studies on species at risk, which are listed in the Red List of the World Conservation Union.

As per the report, around 70-80 per cent of people worldwide rely on herbal medicines to meet their healthcare needs. According to Hamilton, concerns about over-harvesting are more pertinent because most species of medicinal plants are collected from the wild. For instance, the 200-550 species used in traditional medicines in South Africa originate from wild sources.
Apprehensions about the possible extinction of herbal plants have also been expressed in a report of Plantlife International, a uk-based non-governmental organisation. One species highlighted as being under threat is tetu lakha, a small tree found in the rainforests of south India and Sri Lanka, which is used for manufacturing anti-cancer drugs in Europe. Other threatened plant species include costus from India whose root is used for chronic skin disorders, and the tendrilled fritillary found in China, which is used to treat respiratory infections.

According to Plantlife, despite being aware of the crisis for years, the industry has failed to ensure the sustainability of its 'supplies'. The process of collecting the plants is destructive. For instance, the market for African cherry, the bark of which is used for the treatment for prostate enlargement, has collapsed as many trees have been destroyed. The trees had survived the onslaught in the past because less than half of their bark was harvested.

Both the reports urge the industry to adapt sustainable practices. "The extinction of the plants will not only impact the genetic pool of flora, but also the economies of developing nations, as many poor people are dependent on these plants for their livelihood," concludes Hamilton.