In last one week, two elephants died in Cauvery Wildlife Sanctuary in Karnataka due to dehydration and heat stroke 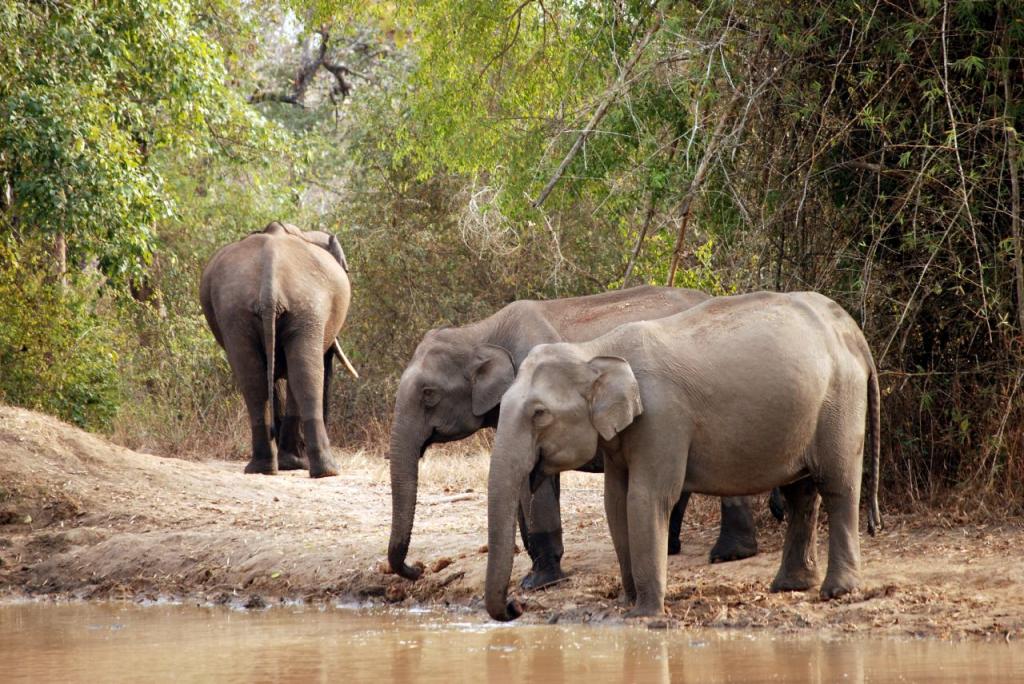 Desperately in need of water and fodder, the dehydrated elephants are wandering into human territories. Credit: Dhruvaraj S / Flickr

As water shortage and scorching heat continue to prevail over large swathes of Karnataka and Tamil Nadu, animals in forest reserves and sanctuaries continue to bear the brunt of drought.

“We neither have water, nor any grass left in the reserves. Karnataka didn’t receive enough rain last year. This year, too, situation has remained the same,” says Ramesh Kumar, Divisional Forest Officer (DFO) at Cauvery Wildlife Sanctuary.

Talking to Down To Earth about the steps taken by the authorities, Kumar says, “We recently gave a presentation to the Chief Minister on how we are creating artificial ponds and using motor pumps to supply water from borewells (200-ft-deep) dug beside ponds. Each borewell is providing water to two ponds. We are also supplying water to these watering holes through tankers. Camera traps installed near these ponds show that not just elephants, but tigers, leopards, wild dogs, sloth bears and other animals are also frequenting these places.”

The same method is being replicated by officials in the Bandipur and Nagarahole national parks. 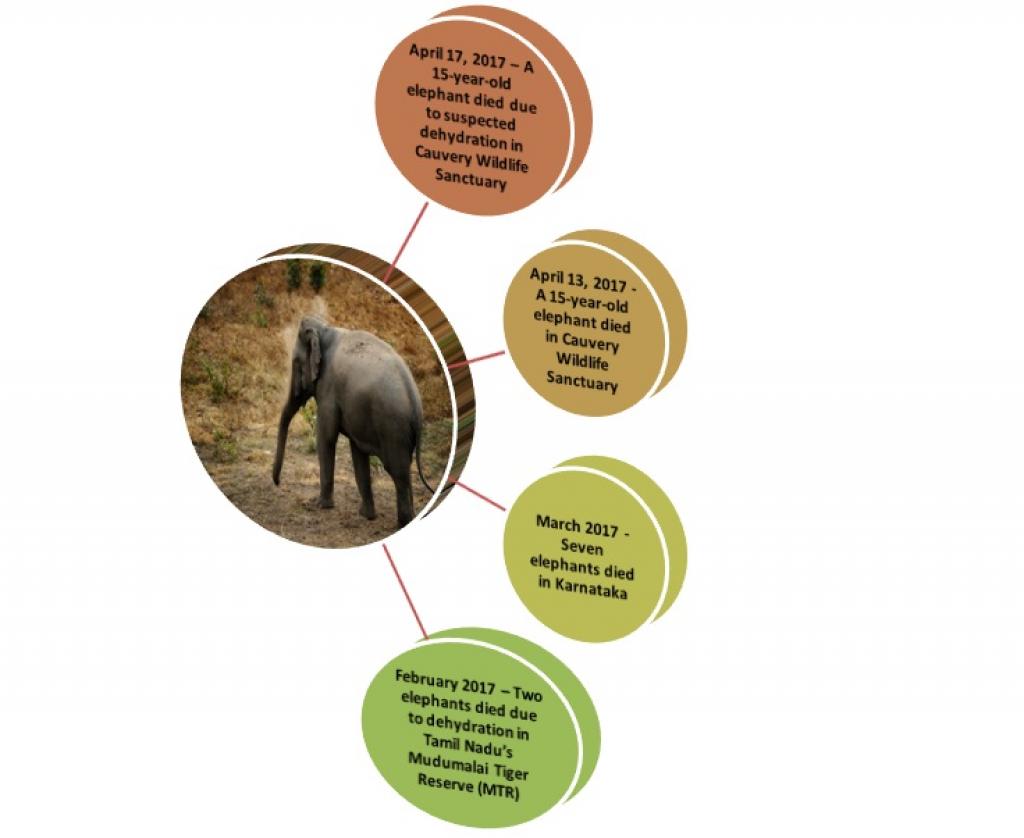 The problem, according to Kumar, is not just the lack of rain, but also the lack of grass. “Most of the areas are dry to the core and grass is not visible. We can provide water to the animals in the reserve but how can we provide them grass? While smaller animals can survive in drought-hit conditions, larger animals like elephants find it difficult to get enough food,” says Kumar.

According to the data from the Karnataka State Natural Disaster Monitoring Centre, the state received 815 mm of rainfall in 2016 as opposed to the normal annual rainfall of 1144 mm.  Rainfall came down by 40-70 per cent between August and December. Currently, 160 of 176 taluks in Karnataka have been declared drought-hit. Karnataka’s northern districts are without water for the third consecutive year. The situation worsened this year. While pre-monsoon rain has picked up in neighbouring state of Kerala, it was only on Thursday (April 20) that Karnataka received rain.

In March as many as seven elephants died in Karnataka.

Animals straying into human territories in search of water 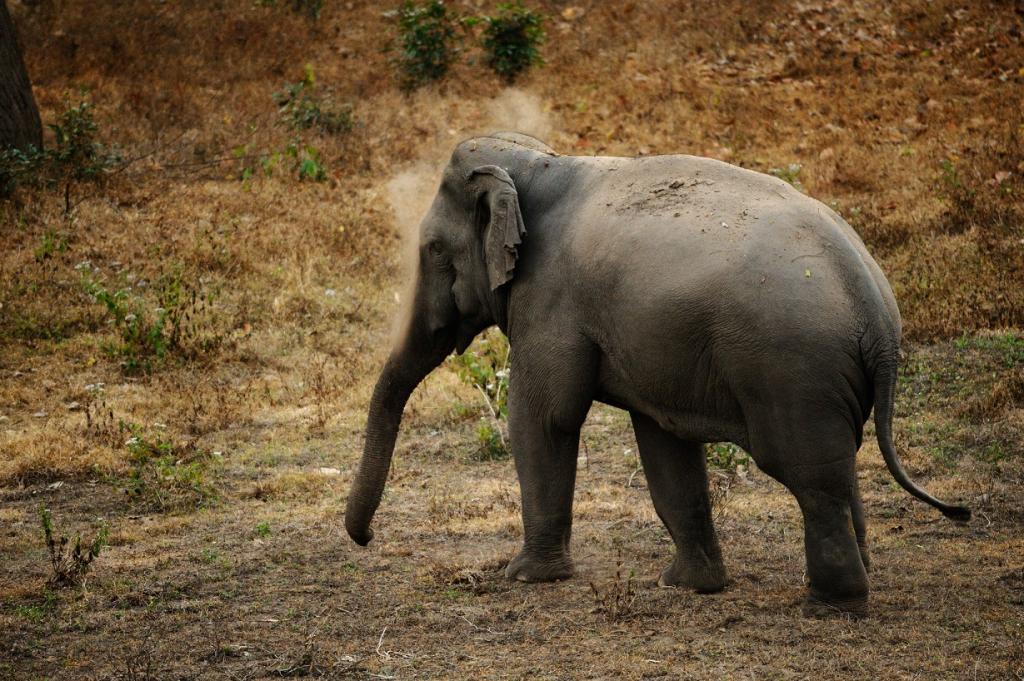 Desperately in need of water and fodder, the dehydrated animals, especially the elephants are wandering into human territories. On April 18, three elephants reportedly wandered into Kolathur in Tamil Nadu, in search of water. They ended up damaging crops. A similar incident happened in Pannavadi Parisal Thurai near the Karnataka-Tamil Nadu border.

Last winter, acute scarcity of water affected wild animals in the reserve forests near Mettur and Kolathur on the Karnataka-Tamil Nadu border. The animals were straying into the villages around reserve forests in search of drinking water, causing much anxiety to the local residents as well as the forest and revenue officials.

When Down To Earth asked Raman Sukumar, Founder and Managing Trustee, Asian Elephant Research and Conservation (AERC), about the vulnerability of elephants in the time of drought, he said, “In drought-hit regions, the elephants are faced with scarcity of proteinaceous forage. They are not able to sustain without it. Water availability is not so much of a problem as compared to lack of proteinaceous food. While the death of elephants during prolonged dry spells is not unprecedented, we have to think of ways to help these animals sustain in case the drought cycle intensifies in future.”

Stating that there’s no need to press the panic button yet as southern India has seen healthy growth in the population of Asian elephants, Sukumar added that there’s a need to devise a strategy on how to prevent a massive die-off of elephants in case climate change persists.