Grey hypocolius seen for the first time in the Thar

Found in North Africa and West Asia, the bird was photographed in two locations in Rajasthan 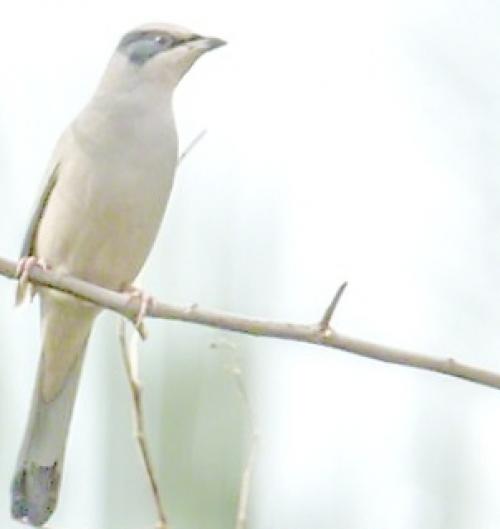 The Grey Hypocolius (Hypocolius ampelinus), a small migratory bird that usually makes its home in West Asia and North Africa and is a regular visitor to Kutch, has been sighted in Western Rajasthan for the first time on March 4, 2019.

On March 3 and 4, Divesh Saini and Radheshyam Bishnoi, two community volunteers of ERDS Foundation, a non-profit working in western Rajasthan, were on their routine birding trip in Pokhran, Jaisalmer district, when they sighted a flock of 5 individuals of the species, Sumit Dookia, assistant professor, Guru Gobind Singh Indraprastha University, Delhi, told Down To Earth.

ERDS Foundation had started a grassroots campaign last year for monitoring the faunal diversity in western Rajasthan. Dookia is a co-mentor to the project along with Mamta Rawat. The project is supported by a Swiss charity, Binocular4Charity.

“This finding is unique. Earlier, this bird was known to winter in a few areas of Kutch in Gujarat,” Dookia said. “There, it mainly fed on Salvedora fruits. There was a high probability that the bird could be found in western Rajasthan as well. Keeping this in mind, our volunteers started exploring all the sites where Salvedora or Peelu trees were in good number,” he added.

Dookia says the finding means that western Rajasthan is still not fully explored in terms of avifauna and there are many species waiting to be discovered there. “It would be a good opportunity for local birders to start a bird-based tourism model in the area which can bring income to the community,” he said.

Earlier, the team of Saini and Bishnoi had also reported the sighting of the Horned Grebe as well as the Red-necked Phalarope bird. Both are water-loving species, says Dookia.

It's a great news, Gray Hypocolius has been sighted and photohraphed in two different locations in Western Rajasthan for first time. This was possible b'coz of Community Volunteers of @and_ecology for regular monitoring in #Gib landscape.
Photo Credit Dr. Divesh Saini pic.twitter.com/pKBSa9tS6Z