Phytoplankton blooms in the Atlantic may originate in autumn rather than spring: NASA 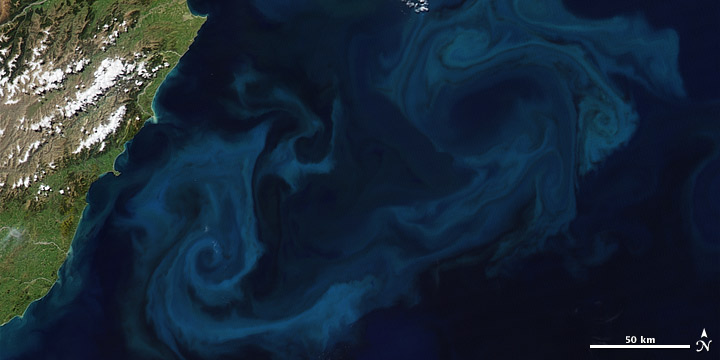 Phytoplankton blooms in the North Atlantic Ocean, earlier attributed to the onset of spring, may actually have their origins in autumn.

This was revealed in satellite data and findings of the first field campaign of NASA’s North Atlantic Aerosols and Marine Ecosystem Study (NAAMES), which ended on December 1 last year.

“It is an important finding. But we need yearly data to generalise these findings,” said Dinabandhu Sahoo, algologist and professor at the Department of Botany in Delhi University.

NAAMES, which officially began on November 6, uses a combination of ship-based measurements, aircraft-based measurements and satellite data to analyse the annual cycles of plankton and their interaction with atmospheric aerosols.

This interaction can have a huge effect on limiting the impacts of climate change as phytoplanktons absorb carbon dioxide dissolved into the ocean to carry out photosynthesis, thus saving us from the environmental impacts of a greenhouse gas we so despise.

“Algae are environmental treasures. They have the beauty of removing carbon dioxide from water,” Sahoo said. On an average, one kilogram of algae utilise 1.8 kg of carbon dioxide for photosynthesis, he added.

Phytoplanktons also release organic molecules in seawater, which are lifted into the air by sea sprays. (NAAMES detected aerosol influences at coastal monitoring stations as far away as Ireland). Aerosols are the nuclei around which other molecules congregate to form clouds. The reflective ability of clouds increases with increase in aerosol concentrations. More reflective clouds imply a cooler climate.

The finding is startling as autumn and winters are a harsh time when growth conditions for the phytoplankton are at their worst. This is because growth depends on the availability of sunlight, apart from a host of other requirements such as carbon dioxide, nitrates, phosphates, silicates, calcium, etc.

“The reason why blooms were also observed in winter could also be something as simple as upwelling eddies in winter that result in a surge in nutrients. Sunlight is not the only factor affecting phytoplankton growth,” Sahoo said.

Mike Behrenfield, principal investigator of NAAMES, was quoted by NASA as saying that that the reason could be attributed to winter storms: winter storms cause churning of water in the ocean, making it more diluted. This makes it difficult for predators (zooplanktons and other large ocean animals) to find their prey (the phytoplanktons).

That is why NAAMES’ field expedition in November did not find an increase in the number of planktons during winter but satellite data managed to detect it. On September 23, 2015, the Visible Infrared Imaging Radiometer (VIIR), essentially a colour-sensitive sensor, on the Suomi-NPP satellite released images of the bloom.

Satellites are able to detect such blooms because the high concentration of chlorophyll and other light-catching pigments present in them change the way in which the surface reflects light, making them appear milky white/bright blue.

Phytoplanktons are microscopic organisms that live in watery environments, both salty and fresh. A bloom occurs when conditions for growth—availability of carbon dioxide, sunlight, nitrate, phosphate, silicate, calcium and other nutrients—are highly conducive. While a typical bloom may last several weeks, individual planktons live for just a few days.

Referring to the North Atlantic bloom and the implications of their findings with respect to it, Behrenfield said, “If we can understand how this critical region behaves today, we can make better predictions of how this massive ecosystem can change in the future and make informed decisions on how to respond to these changes.”