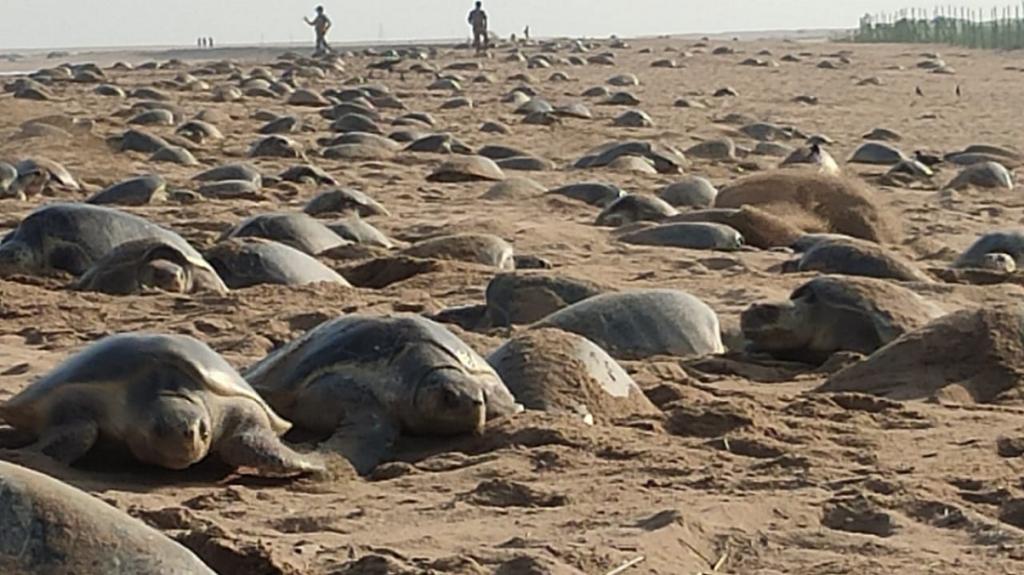 Wildlife activists have expressed apprehension over the construction a sewage treatment plant at Palibandh, near the Rushikulya river estuary in Odisha’s Ganjam district, the site of India’s second-largest rookery of Olive Ridley turtles. The plant, if constructed, will spell doom for the turtles, the activists have warned.

The Notified Area Council (NAC) Ganjam has started to construct its proposed Rs two-crore sewage treatment plant in a 1.50-acre plot of land near the river mouth. The local tehsil office has identified the land, sources said.

Any activities near the rookery will create obstacles for the mass nesting of the Olive Ridley turtles, Biswajit Mohanty, secretary, Odisha Wildlife Society, a non-profit organisation, said. The construction of the proposed plant will also violate Coastal Regulation Zone (CRZ) norms, which prohibit any construction work within 500 metres from the beach, he said.

Mohanty urged the Ganjam district administration to stop the construction work at the proposed site and allot an alternative spot for the proposed sewage treatment plant.

Amlan Nayak, the divisional forest officer of Berhampur said the site where construction had started, would be verified. Permission from the forest department would not be needed since the land was not forest land, he said.

PK Mohapatra, chief engineer, Odisha Water Supply and Sewerage Board, however, said the plant would not pose any threat to Olive Ridleys.

“There will be no pollution near the plant site. The structure will be made like a park. Compost will be produced after treatment, while the treated water will be used for the growth of grass in the area,” he said.

Mohapatra said the local civic body should also take steps to stop the operation of the plant for around a week during the mass nesting period in order to leave the mother Olive Ridleys alone.

Ronit Kumar, executive officer, Ganjam NAC, said the proposed site did not violate the CRZ norms, as it was located away from the beach. The proposed plant was also away from the mass nesting site of the Olive Ridley turtles, he said.

Kumar added that his team would once again consult with scientists of the Odisha State Pollution Control Board and the divisional forest officer, Berhampur to address the concerns of environmentalists and wildlife activists.

“The land is yet to be handed over to the civic body. Only the ground leveling and sand casting work was started after the local tehsil office accorded the no objection certificate for the proposed plant,” Kumar said.