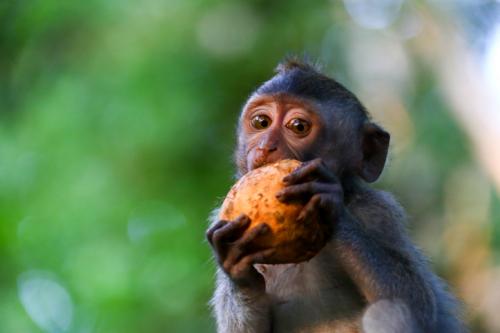 Primates are remarkable. We’re all familiar with chimpanzees, monkeys, and ring-tailed lemurs, but have you heard of tarsiers, with their big eyes? Or Cleese’s woolly lemur, named after John Cleese? Or the fabulous red-shanked douc? What about the scary-looking red-headed bald uakari? Or did you know that primates can be as small as mice?

There are 504 species in all, which makes primates one of the largest groups of mammals. Some – those we’re most familiar with – are active during the day, but others come out only at night. Some eat fruit, others eat leaves, still others eat insects, and some hunt for meat. One species mainly eats mushrooms, and some even eat other primates.

Primates mostly live in tropical rainforests, and two thirds of all species can be found in Brazil, Madagascar, Indonesia or the Democratic Republic of Congo. But they can also be found in grassland, snowy mountains and deserts, and some even thrive in our cities.

Primates can live in solitude, in huge, complex societies, or anything in between. Some swing through the trees with such grace that they look like they’re flying, others don’t seem to move very much at all. Some sing duets. Many of them are superbly colourful. Some are beautiful; others are ugly. All of them are fascinating.

I’ve been studying primates for 20 years, and I’m still surprised and delighted by new discoveries. Like the day I saw female monkeys attack a male three times their size. Or when I learned that some primates bury themselves in the ground to hibernate. And that capuchins crush millipedes and use them as insect repellent.

Primates are also essential to tropical rainforests, pollinating trees and dispersing seeds across these vital carbon stores. They’re our closest biological relatives, and we look to them to understand our own evolution.

Over the past couple of years, I’ve been part of a global group of primatologists who have assessed the conservation status of all those 504 species. Our results are now published in the journal Science Advances.

The news is bad – primates are in dire trouble. Around 60% of species are threatened with extinction and 75% are declining in numbers. Without action, these numbers will grow and more species will disappear forever.

This dismal situation is our fault. Primates are mainly threatened by losing their habitat when it is logged or converted into farms or ranches. They can also be hunted for meat, or to supply the illegal trade in pets and body parts. Road construction, oil and gas extraction, mining, pollution, disease and climate change all add to the list of threats, often in combination.

I have flown over agricultural land that has replaced tropical forests, and stood among the charred remains of what was primate habitat. I have driven along newly constructed roads and seen dead primates for sale, and shopped in markets which sell bushmeat. I have seen newly-caught baby monkeys, destined to die slowly despite the best efforts of their human carers. I have worked with rescued animals and pondered their future. I have travelled on rainforest rivers heavily but invisibly polluted by illegal mining. I have come across hunters’ camps deep in protected areas, and I have walked through silent forests, emptied of animals.

People living in these areas don’t set out to exterminate primate species. I have talked with people driven to distraction when their subsistence crops are ravaged by wildlife, including primates; with hunters who hunt to feed their family and to earn money for their children’s schooling and for medical bills; and with fisherpeople who hunt primates to feed their family when there are no fish available.

The threat to primates is a result of political uncertainty, socio-economic instability, organised crime, corruption, and policies that favour short-term profit over long-term sustainability.

It is hard to be positive when faced with human-driven extinction of our closest relatives. The situation is critical, but we, the 31 authors of the new report, led by Alejandro Estrada of Universidad Nacional Autónoma de México and Paul A Garber of the University of Illinois, believe it is still reversible. To prevent primate extinctions, human needs must be addressed in sustainable ways, whether that be locally (finding ways for farmers to coexist with primates who forage on their crops) or globally (halting deforestation).

There is no single answer. Conservation policies must be adapted for each country, habitat or species, based on the exact nature of each problem. This is a formidable task. But our hope stems from exceptional projects and extraordinary people around the world, like the Virunga rangers who risk (and lose) their lives to protect gorillas and other primates in DR Congo or Fundacion Pro-Conservation Primates Panamenos, an organisation dedicated to conserving Panama’s monkeys.

The solutions lie in global fairness, and taking responsibility for the implications of our actions. We can’t ignore political and human disasters in other countries. We need to accommodate the needs of both primates and people in land-use policies, monitor primate populations, and mitigate illegal trade. Captive populations can be used to rescue species from the brink of extinction, but if their natural habitat has gone, there is no hope.

To reduce the pressure on primates and their habitats we must decrease demand for tropical hardwood, beef, palm oil, soy, rubber, minerals and fossil fuels, and promote sustainable resources. This is not news, but we must make it unacceptable to prioritise excessive and unnecessary consumption over the persistence of other species. Every consumer decision we make has global implications. Moreover, we must understand that wild animals are not suitable pets (the clue is in the word “wild”).

Biologically, extinction is a normal phenomenon. Species evolve, and species go extinct. From time-to-time in earth’s history, mass extinctions have wiped out huge numbers of species globally. However, we cannot accept that we, as one primate species, drive others to extinction when are still able to prevent it.