Forty-five found dead, remaining 36 pushed back into the sea with slim chances of survival 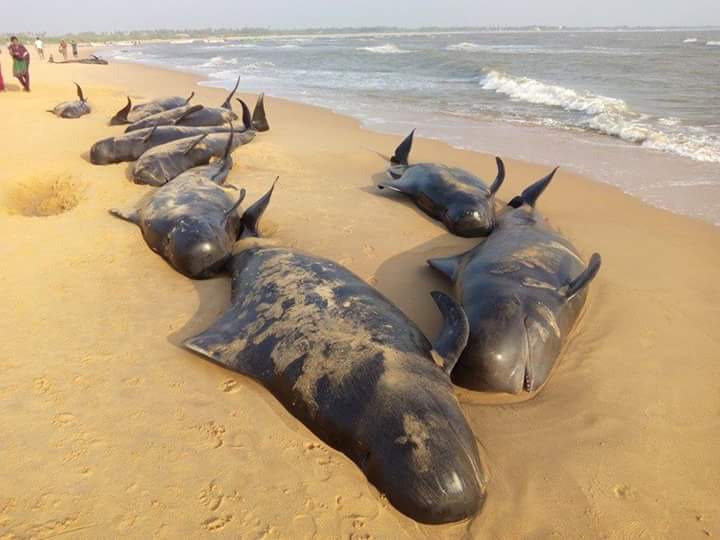 Eighty-one short-finned pilot whales got stranded on the shores of the port city of Tuticorin in Tamil Nadu on the night of January 11. Forty-five were found dead while 36 were marooned on the beach, with little hope of surviving.

The whales were found by local fishermen after they got washed off onto the shores on Monday night. According to sources, the 36 surviving whales were in a “disoriented” condition before they were “led back into the sea by local fishermen using nets and boats.” The whales reportedly kept returning to the shore despite being pushed into the sea, leading experts to believe that they had slim chances of surviving.

The exact reason for the stranding remains unclear, but group cohesion certainly played a part in it. J K Patterson Edward, director of Suganthi Devadason Marine Research Institute (SDMRI) told Down To Earth that “the whales may come to shore for many reasons. They may come looking for food. Even if one or two animals come, the rest will follow.”

Other experts agreed. “These whales travel in large groups and are highly social in nature. While one cannot put a finger on the reasons for stranding, it is speculated that when one individual is stranded, the rest of them follow suit,” said A Murugan, head of the Department of Marine Ecology and Conservation at VOC College in Tuticorin. He also added that a possible cause of mass stranding could be that the whales’ sonar communication could have been disturbed.

There is a very short window of time available to rescue stranded whales, as they have to be kept cool and wet to avoid distress. “The remoteness of the area and the absence of equipment to move the whales is a cause of concern,” Edward added.

Meanwhile, People's Movement Against Nuclear Energy, an anti-nuclear power group based in Tamil Nadu, has alleged that nuclear waste from the Kudankulam Nuclear Power Plant (KNPP) could be the reason for the whales perishing. “The KNPP was conducting some tests. We are not sure if the tests are the reason for the whale stranding, but there have been rumours about the tests being harmful. The plant has been shut since June 2015 and the nuclear authorities are refusing to divulge information; they are refusing to share public documents,” said S.P. Udayakumar, Convener, People's Movement Against Nuclear Energy.

Experts on marine ecology said that the claim was “unscientific and alarmist in nature.”

“If the nuclear plant were to be blamed, would it not have affected the other species as well? It is in the nature of these whales to come closer to the shallow shores in search of squids and other fish which form their prey base and they get stranded. The nuclear plant has no role in it, scientifically speaking,” said an expert on the condition of anonymity.

A very similar incident occurred on January 14, 1973 when 147 individuals of the same species were stranded on the same beach. The whales perished when efforts to push them back into the sea failed.