Tourism drives 8.5 per cent of Africa’s economy and 80 per cent of annual trips to the continent are for wildlife watching, yet Africa's protected areas are underfunded by up to 10 times, according to a working paper on the economics of nature-based tourism.

This diegrades the continent's unique diversities of wildlife and habitat, added the report. To maintain the continent's surviving lion's alone would cost $2 billion more, according to the paper presented at the African continent’s first-ever Wildlife Economy Summit being held at Victoria Falls in Nairobi.

This is when the number of international tourists to Africa is projected to jump to 134 million from 62 million by 2030. The sector also generates 24 million jobs.

Wildlife is the biggest driver for Africa’s tourism growth as the continent’s 8,400 protected areas generate $48 billion in direct in-country expenditure, highlighted the report. So, nature-based tourism offers a great financial opportunity for African governments, read the paper that focused on the financial benefits of nature-based tourism in Africa’s state protected areas for governments and businesses.

It listed habitat loss, overexploitation of natural resources, fragmentation or isolation as a result of human activity, including logging, agriculture and hunting as reasons that increasingly threaten the protected areas.

“Governments tend not to fund their State Protected Areas adequately because of competition for limited resources with immediate social needs like education and health, and because government bureaucracy tends to consider protected areas as environmental rather than economic assets,” read the report.

But, there is an urgent need to identify sustainable funds  to maintain the natural landscapes that are not only driving Africa’s economy but also supporting the ecosystem services on which all life depends.

Nature-based tourism can fill the gap

Tourism leverages key assets of the rural landscapes, where majority of Africans live and which has the potential to fill the funding gap in the funds. It generates 40 per cent more full-time jobs than agriculture, which also gets the same investment.

Nature-based tourism alone has the potential to create two times more jobs than the automotive, telecommunications and financial industries. It also provides significantly more job opportunities to women compared to other sectors. 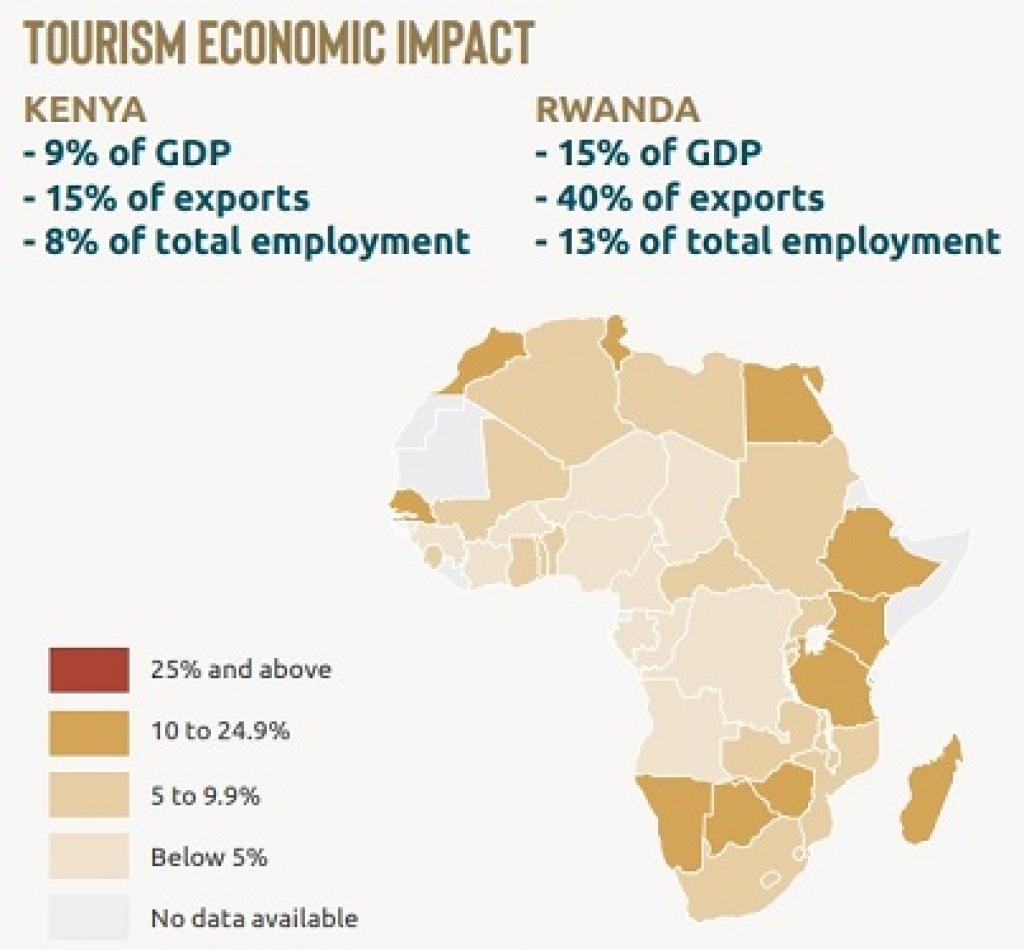 For every $1 of direct spending in protected areas, including park fees, lodge nights, activities booked at lodges/camps and so on, additional $0.79 is spent in the local economy. In some countries this wider impact is far higher. For example for every $1 spent by a leisure tourist in Uganda, an additional $2.5 in gross domestic product (GDP) is generated.

The Government of Rwanda established a tourism plan on recognising the potential of nature-based tourism. As a result, the number of tourists visiting national parks increased by more than 93 times in two decades (1999-2019), according to the report. This boom provided jobs to 410,000 people, and brought 15 per cent of revenue for community development around the national parks.

Costa Rica, a lesson for Africa

Costa Rica is an inspiration for other countries after it committed itself to a long-term national nature-based tourism plan, read the report citing a case study.

Today, despite accounting for only 0.03 per cent of Earth’s land area, it attracts 2.3 million tourists a year, generating $7.5 billion annually. Also, through its Forever Costa Rica initiative, the country secured long-term financing to maintain the protected area network.

Currently, very few of Africa’s protected areas are meeting their potential as engines for tourism growth. But the continent’s protected areas are national assets that can provide significant financial and social returns not only in the short term but for centuries to come, according to the paper.