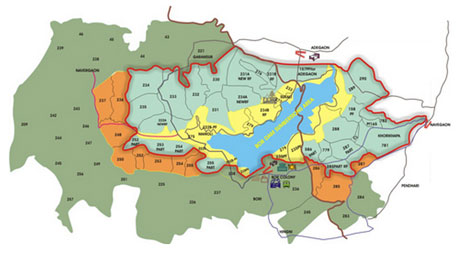 The National Tiger Conservation Authority, in declaring this reserve, has bent its own guidelines to declare this area a TR. According to the guidelines a minimum of 800-1,000 sq km of area is required to provide the required ecological supports for tiger survival. Interestingly, the original recommendation of the Maharashtra Forest Department was to recognize the 61.10 sq km Bor and 60.69 km New Bor sanctuaries as extensions of the Pench Tiger Reserve located in the neighbouring Nagpur district.

Forest officials, on condition of anonymity, have said that while the new reserve may be unviable, its new status will surely help in conservation since it will now receive funds from the Centre. Officials further added that strong conservation measures were necessary because the Bor sanctuary falls at a crucial location between the Pench and Tadoba-Andhari tiger reserves, located in the Nagpur and Chandrapur districts respectively, and the corridor between the two reserves has become highly fragmented.

TATR gets back a portion of its buffer
A portion of the Tadoba Andhari Tiger Reserve’s (TATR) buffer zone, which had been given to the Forest Development Corporation of Maharashtra (FDCM) on lease, has finally been restored to the reserve, two years after the buffer zone was notified. Conservationists say this thickly forested patch was crucial for the security of tigers of TATR.

The 1,103.34 sq km buffer zone of TATR was notified in May 2010, and was handed over to the field director of the reserve in 2012. However, a 125.51 sq km thickly forested patch, which had been leased to the FDCM, was left out in the handing over process.

Forest officials informed that this particular patch, being contiguous with the reserve, is good tiger habitat, and leaving it to the FDCM for timber-felling was a waste of a valuable resource. Also, due to two parallel authorities in existence, neither the TATR administration nor FDCM was willing to handle cases of forest crime.

In March this year, the National Tiger Conservation Authority wrote to the secretary, forests Praveen Pardeshi, to the effect, asking him to transfer the said patch to TATR, following which the decision was taken, said officials.

Undermining Tadoba’s tigers: how Chandrapur’s tiger habitat is being destroyed by coal mining