Illegal wildlife trade seems to be on the rise amid the nationwide lockdown to curb the novel coronavirus disease (COVID-19) outbreak. National parks across the country reported incidents of clashes between wildlife rangers and hunters.

Rising unemployment also contributed to an increase in hunting activities.

“There is no work in hand, so I’m hunting,” said Siddha, a youth from a tribal family, who took part in the Sandra festival.

“We know that killing wildlife is legally punishable but the hunting festival was not included. We will monitor this matter,” said Sagata Das, a forest officer in East Midnapore.

West Bengal has a large exotic bird breeding industry that supports a huge number of people. Parakeets and mynas are the most commonly traded birds in West Bengal, while the peacock is hunted in Maharashtra. 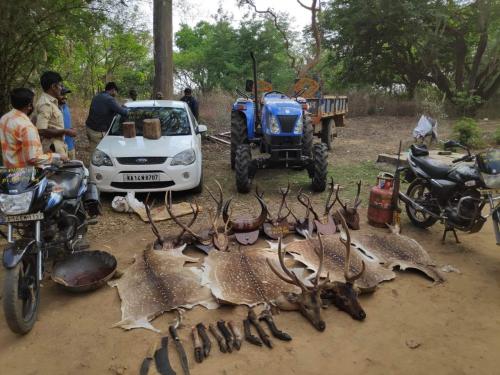 The illegal transport of birds had increased, with trading conducted at the Nepal border through Uttar Pradesh, according to Chandan Clement Singh, the founder of Nest for Nature and Social Development, a non-profit that works on rescuing wild animals.

“Perpetrators always slip away. We need to protect exotic birds and save them from being traded,” Singh said.

Exotic birds and exotic fish breeding did not come under the preview of the forest department as these species were not listed under the Wildlife Protection Act 1972, he said.

Maharashtra, Goa and Karnataka saw incidents where people were arrested for hunting wild animals including a tiger and deer.

Three people were arrested after they hunted peacocks in Ghoti area, near Kalamb city in Maharashtra.

“We have made people aware regarding the same and asked locals to call us immediately if they see any illegal activity in their area,” said KR Arjun, an assistant forest officer.

Two people were caught after hunting down a tiger in a reserved forest area in Goa with country-made guns.

“As far as Goa is concerned, except one incident in Canacona, no other incidents of hunting were reported. Miscreants in Karnataka were arrested for hunting deers,” said a senior forest officer in-charge of the Goa Karnataka region.

A team of five hunters were arrested after reportedly killing two spotted deer in Karnataka’s Shivamogga district on April 6, 2020.

The reports of poaching of wild animals were confirmed by a senior forest officer, who said that it was tougher to transport exotic birds.

Poaching of wild animals may rise, but not the trade of exotic birds, he said, adding that it was more difficult to transport exotic birds in India in the present scenario because of an active Directorate of Enforcement.