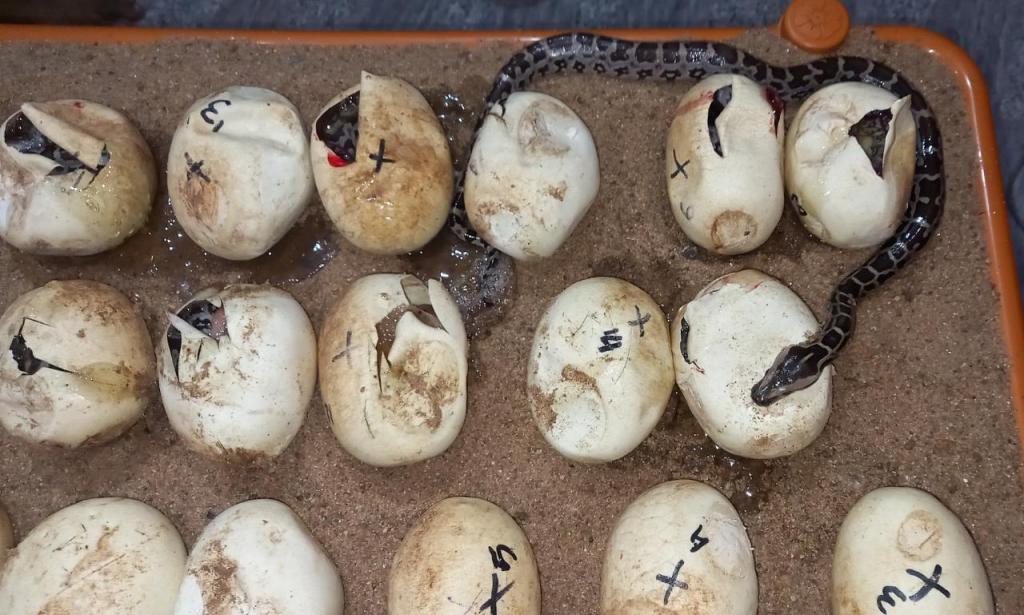 The Odisha forest department and snake helpline artificially hatched eggs of a python June 30, 2021, said forest officials. The eggs belong to a python rescued from under rocks May 5 at Garhnial village in Chandaka Wildlife Sanctuary on the outskirts of Bhubaneswar.

Python hatchlings emerged from 27 of the total 30 eggs preserved in an artificial hatchery to protect from rain. Three eggs were destroyed by ants.

Villagers had found the pregnant python struggling to free itself from a heap of rocks and informed the department. “We were guarding the pregnant python by cordoning the area. It slithered into the forest on May 22 leaving all the eggs,” said Suvendu Mallick, general secretary of Odisha Snake Helpline.

The hatchlings will be given small insects to feed on and water. They will be released in the forest after a few days, said Jayakrushna Panda, the forest range officer of Haladia forest range.

He added that the officials celebrated the birth by cutting a cake.

Shrinking habitats, hunting and destruction of eggs by feral dogs, wild boars, jackals, monitor lizards and fishing cats pose a threat to the survival of pythons, the officer added.

“We conduct awareness drives to urge villagers not to kill snakes or destroy their eggs.”

Snakes kill rats and help farmers. The balance of nature's food chain will be affected if we fail to save the snakes, Panda added.