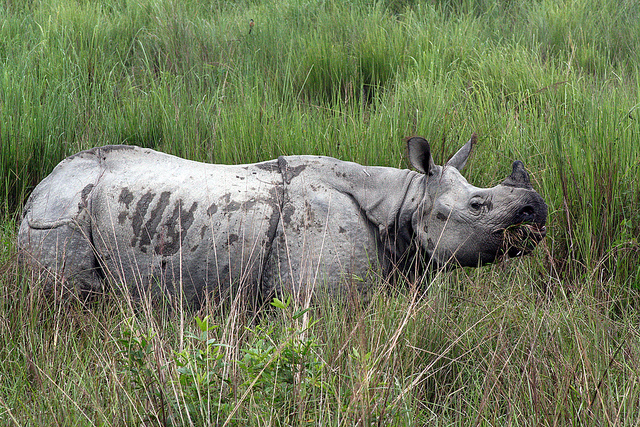 Three forest guards and a former guard of the Kaziranga National Park have been arrested along with four alleged poachers in a rhino-poaching case of November 2015.

Confirming the news, a source said that the issue came to light during the regular checking of vehicles on the NH-37 from the park in Jakhalabandha in Nagaon district on Friday, when a rhino horn was recovered from a man. During interrogation, he revealed that the forest guards were accomplice to the poaching.

“The police exhumed the skeleton of the rhino on Monday. The rhino was killed in November last year by the gang. The accused buried the carcass in the park after removing the rhino’s horn. We have arrested three temporary staff employed as guards and a former guard and four other poachers. We are investigating them and it is likely to unveil a big nexus,” said Shubhashish Das, the Divisional Forest Officer.

Local sources told Down to Earth that the inspection of vehicles was increased by the Forest Department after the carcass of an adult male rhino was found recently with its horn cut off by poachers in Kaziranga. The total count of rhinos killed this year has reached seven.

The police arrested the three forest guards from Burapahar range—Keshab Gyan, Pintu Das and Tankeshwar Bordoloi on Sunday and Kuddus Ali, a former guard of the park, and four poachers—Shorab, Rafiq, Ibrahim and Saiful on Monday. “Kuddus Ali was the top man of the poaching racket. He had been employed as a forest guard and was fired in January,” the DFO confirmed.