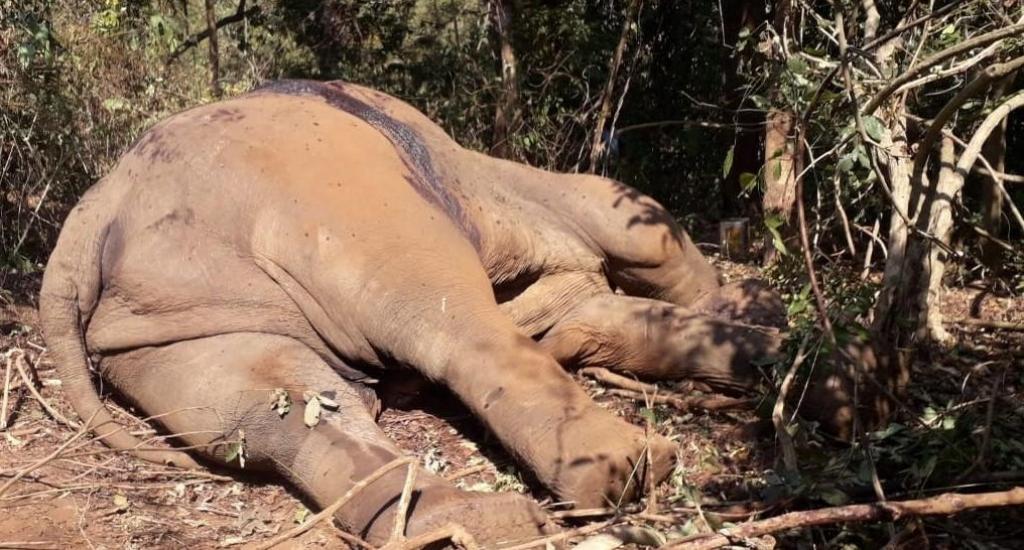 The bullet ridden body of the elephant. Photo: Ashis Senapati

A wild male elephant was gunned down in the Hindol forest range of Odisha’s Dhenkanal district February 10, 2021 and its tusks hacked off during a brutal attack by poachers, officials said.

A group of poachers using guns were believed to have attacked the elephant from close range. As a result, around 10 bullets pierced the animal’s body, Prakash Chandra Gogineni, the divisional forest officer of Dhenkanal forest division said.

Their motive was poaching; they removed the tusks of the elephant, he added.

A team of forest guards reached the spot at around 6.30 pm February 10 when they heard gunshots in the forest. Around 10 poachers armed with guns fired at the forest personnel.

“The guards managed to flee from the spot as they were not armed with any guns. Later, we found the bullet ridden body of the tusker, with its tusks cut off. We are raiding several hideouts with the help of police to nab the poachers,” the forest officer added.

The gunning down of the elephant has elicited anger from conservationists.

“There has been a spate of elephant killings in the state since last year but no arrests as yet. Although the state forest department has been making tall claims of keeping tabs on poaching, the gunning down a tusker and seizure of many tusks recently presents a different picture,” Jayakrushna Panigraphi, the secretary of Odisha Environmental Society, said.

The rise in poaching cases was also indicative of more demand for tusks from the international illegal trade market, he added

On February 17, 2020 Bikram Keshari Arukha, Odisha’s forest and environment minister stated in the state assembly that 246 elephants had died in Odisha between 2016-17 and 2018-19 due to various reasons.

These included accidental electrocution, disease, accidents involving trains and other vehicles, natural and other causes.

The minister also stated that according to the 2017 elephant census, Odisha housed 1,976 elephants. The Simlipal forest division had the highest number at 330, followed by Dhenkanal (169), Satkosia (147) and Athagarh (115). Of the total 50 forest ranges in the state, 12 did not have a single elephant.