The tusks of the male elephant were removed. There were no signs of external injuries Photo: Ashis Senapati

The carcasses of a male and female elephant were found — with the tusks of the male elephant removed — in the Baitarani forest in Odisha’s Keonjhar district on June 14, 2020.

Forest officials suspect poaching to be the reason, as no external injuries were found that could point to a cause of death. Wildlife activists claim the elephants were poisoned: A common tactic used by poachers. A day earlier, the carcass of a baby elephant was found in Sundargarh district.

The elephant deaths in Odisha come just days after a pregnant elephant in Kerala’s Palakkad district died on June 3, causing outrage across the country.

Locals found the carcasses and informed the officials who sent the carcasses for an autopsy and subsequently buried them. “An investigation is underway. Stern action will be taken against those found guilty in the case,” said Santosh Joshi, the Divisional Forest Officer (DFO) of Keonjhar.

Carcass of the female elephant. Activists claim the elephants were poisoned: A common tactic by poachers Photo: Ashis Senapati

The carcass of the baby elephant was found with injuries in the Rutukepedi forest under the Kuarmunda range in Sundargarh district.

The carcass of the four-month-old elephant was recovered near a pond in the forest.

Injuries were found near the calf’s neck. Forest officials said the elephant calf likely died a day or two before.

An investigation was underway, said Sanjay Swain, DFO of Sundargarh on June 13, when the carcass was found. A forest guard posted in Balanda forest was suspended, while show-cause notices were sent to the forest range officers of Kuarmunda and Kalunga forest ranges in connection with the death, Swain said. 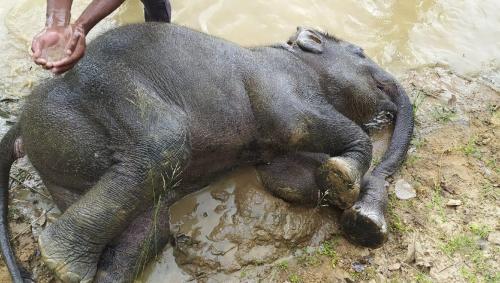 The Odisha forest department has been criticised by both locals and wildlife activists. The locals have accused the forest department of neglect and blamed it for the deaths. Several locals in the area have died as well, reportedly by elephants, who encroach human settlements.

Rampant mining in Odisha’s forests has been blamed for destroying elephant habitats and corridors. Natural streams, waterfalls and rivulets have dried up due to mining activities.

“As a result, their (locals) lives are in danger as elephants kill people,” said Biswajit Mohanty, the secretary of Wildlife Society of Odisha.

Lack of proper patrolling by forest guards is yet another cause for the death of elephants and people, added Mohanty.

There were 246 elephant deaths in Odisha between 2016-17 and 2018-19, the state’s environment minister Bikram Keshari Arukha said on February 17.

The deaths were from a number of reasons, including accidental electrocution, disease, accidents involving trains and other vehicles and natural deaths, said Arukha.

Odisha was home to 1,976 elephants, according to the 2017 elephant census, the minister said.

The greatest number of elephants were in the Simlipal forest division (330), followed by Dhenkanal (169), Satakosia (147) and Athagarh (115). Of the total 50 forest ranges in the state, 12 don’t have a single elephant, the minister added.

Elephant conservation projects in the Simlipal national park and in the Mahanadi and Sambalpur ranges were also being taken up, according to the minister.

Steps were taken to protect and restore 14 elephant corridors in the state. To prevent elephant deaths due to electrocution, the minister said coordination meetings were being held regularly with the state’s energy department officials.

Railway and road transport authorities were also sensitised against elephant deaths due to accidents, he added.