The state has barely 200 Hanguls or Kashmiri Red Stags left, but it does not seem to be alarming enough for the government, whose conservation initiatives are struggling to get off the ground 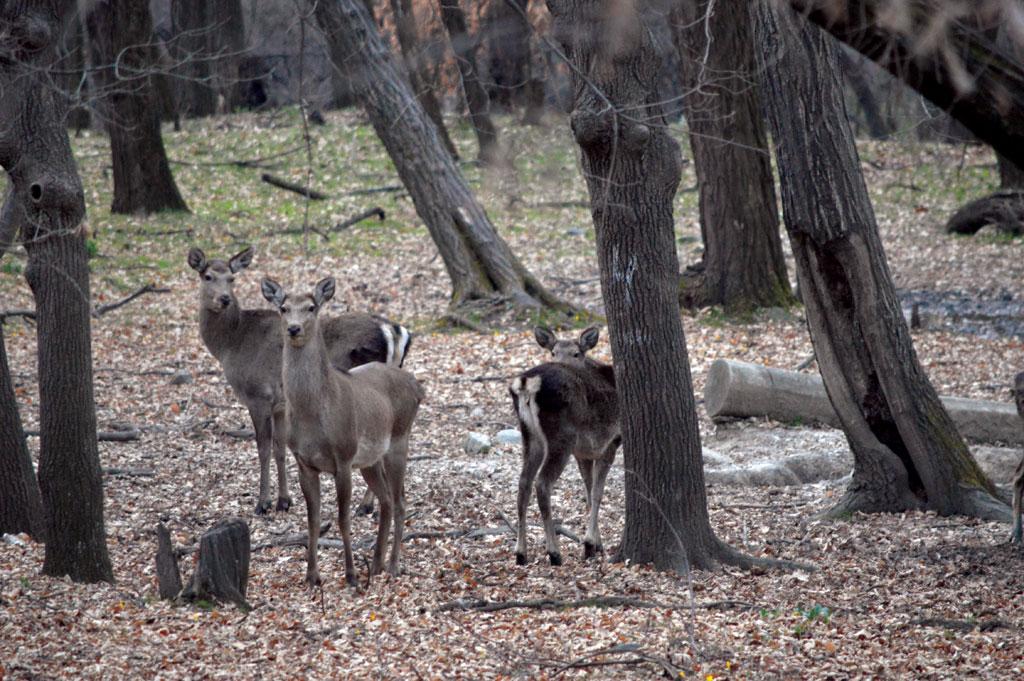 Hangul is the state animal of Jammu and Kashmir and the only surviving subspecies of the red deer family in the Indian subcontinent (Photo: WILDLIFE SOS)

At the Dachigam National Park in Jammu and Kashmir, 22 km from Srinagar, employees and volunteers of wildlife organisations are participating in a rather tough biennial exercise. They are looking for footmarks, faecal pellets and other signs to determine the number of Hanguls or the Kashmiri Red Stags, the state animal of Jammu and Kashmir. Their estimates will be fed into the Hangul census, last conducted in 2015. Aliya Mir, manager at Wildlife SOS Kashmir, a non-profit, says an accurate head count of the animal is not possible. “It is a very shy animal. One sound and the animal just dashes out of sight,” she says.

Hangul comes from the Kashmiri word haang, which means a dark, rusty brown colour. It is the only surviving subspecies of the red deer family in the Indian subcontinent. The stags boast magnificent antlers of 11 to 16 points, which they shed during the mating season in March, another indicator used by surveyors to estimate the number of males during the census.

The Hangul were present in thousands towards the beginning of the 20th century in many parts of Kashmir. The number dropped drastically by the 1970s as hunting permits were misused to poach the Hangul in large numbers (see ‘Diminishing numbers’, p27). Though militancy in the 1990s deterred people from venturing into the forests to hunt, the downward trend has continued. The census of 2015 had estimated that there were only 186 Hangul deer left in Dachigam, the last habitat of the animal, and the 2017 census has once again brought into question the state’s failure to revive their population.

In 2013, alarmed by the dwindling population of the Hangul, the state government set up the Conservation Breeding Centre at Shikargah Tral in south Kashmir and shifted a fawn there with the aim of starting captive breeding. Wildlife officials hoped that the fawn would have some time to acclimatise itself to captivity before breeding could be attempted. But within days, the animal fell prey to a leopard, which breached the boundaries of the centre.

Since then, the multi-crore facility is lying defunct. Rashid Naqash, chief wildlife warden of Jammu and Kashmir, says, “Everything is ready. We have the complete infrastructure. We are trying to get some Hangul stock from the wild to start the breeding programme. Actually, that is the most difficult task.” The department says the deer have eluded capture since the incident in 2013. But the history of the captive breeding programme also points to a lack of initiative on the part of the wildlife department. 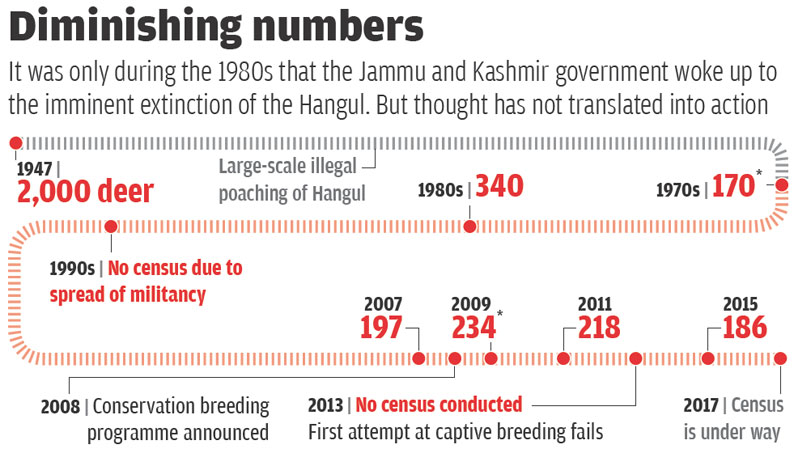 The programme was first announced in 2008 with a financial assistance of Rs 22 crore from the National Zoo Authority of India to build the centre. This was when the Hangul population stood at around 197. But the project did not take off for five years as the department kept citing the “difficulty of catching Hangul”. In 2016, the state government approached the Union environment ministry asking for an additional assistance of Rs 25.72 crore for the breeding centre and to hire red deer breeding experts to make the programme a success. The proposal was rejected by the ministry. Now, the wildlife department says it is making another proposal that will be “backed by population figures of the fresh census”.

The Dachigam National Park was meant to be a habitat exclusively for the Hangul. But the deer are now competing for space and resources with new and old habitants alike. A sheep farm of the state animal husbandry department, spread over an area of a square kilometre, has posed one of the biggest disturbances. Introduced to the farm in 1961, the sheep are suspected of spreading Dictyocaulus viviparus infections (respiratory infections) to the deer.

As it is illegal to have a sheep breeding farm inside the national park, the state Cabinet approved the shifting of the farm in a meeting on April 18, 2005. Since then, the issue has been brought up at several official meetings, but the decision has not been implemented. Communication between various state departments shows how, despite “ordering” the shifting of the farm, no efforts were made to identify an alternative place. In the absence of an equally expansive site, sheep department officials remained adamant. Sources tell Down To Earth that officers were also not willing to relinquish access to the recreational huts built by the department. On March 22, 2017, the state government finally ordered that the sheep be “adjusted” in other farms of the state.

Hangul conservation also took a hit because of the onset of militancy in Kashmir. In the 1990s, security forces took over possession of all high-altitude meadows, making them inaccessible to pastoral nomads. “The nomads found Dachigam a good alternative for shifting their cattle in the absence of any regulations. In summers, when the Hangul moves to lower Dachigam, huge herds of sheep and goats also graze there. The Hangul does not like this disturbance and the competition for food,” says an official of the wildlife department who does not wish to be named.

Among other interferences are a trout farm, government offices, army posts and tourist huts. Khanmoh-Khrew, an industrial area adjacent to Dachigam, is the source of large-scale quarrying and blasting. “The industrial activity is eating into the habitat of Hangul,” says the official. “Hangul is quite sensitive to pollution.”

Despite its low numbers, the Hangul is not recognised as “critically endangered” in the International Union for Conservation of Nature (IUCN) Red List of Threatened Species. Mukesh Thakur, a conservation biologist, says, “Hangul has been categorised as a subspecies of red deer Cervus elaphus, which features in the Least Concern category.” He and his associates published a paper in an IUCN newsletter in May 2016 to appeal that the Hangul’s taxonomic status be raised from Cervus elaphus hanglu to Cervus hanglu hanglu. Research has shown its genetic distinction makes it worthy of being recognised as a species. Thakur hopes that an upgrade in status will attract attention towards their endangered status.

But the Hangul do not have much time left. Their sex ratio and female-to-fawn ratio are imbalanced, with fewer males and fawns per 100 females. “Hangul senses movement from yards away. With so much human activity, the animal shies away from mating. The lives of newborn deer are also at risk,” says Mir. Only a secure habitat and government action can save the animal.