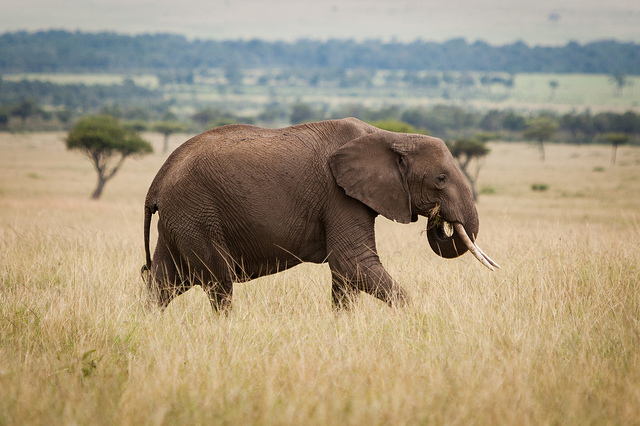 The announcement is a milestone for the movement to combat the global ivory trade, as Hong Kong is a key link in the ivory trafficking trade and provides a strategic transit hub into mainland China.

“We will take steps to completely ban the sale of ivory in Hong Kong,” Chief Executive Leung Chun-ying told the press after his 2016 policy address.

The government will consider other legislative measures for an effective ban on the import and export of ivory and will phase out the local ivory trade, he announced during the address. Hong Kong will also impose heavier penalties on smuggling and illegal trading of endangered species.

The international community banned the trade of ivory in 1989 in order to curtail the rapid decline of elephants—from 1.3 million in the early 20th century to about 600,000 in the 1970s—and the elephant population stabilized for a while. However, legal loopholes that allow stockpiles of seized ivory to be auctioned, have led to resumption of large-scale poaching and the global elephant population has declined to just 419,000.

“History has shown that legal ivory sales only serve to provide a cover for illegal trade, which fuels the rampant poaching we see across Africa,” Peter Knights from San Francisco based WildAid said in a statement.

Approximately 30,000 elephants are killed in Africa every year to fuel the ivory trade, according to wildlife activists and non-profits.

“The government is very concerned about the illegal poaching of elephants in Africa. It will kick start legislative procedures as soon as possible to ban the import and export of elephant hunting trophies,” Chun-ying told policymakers in his speech.

The announcement follows a motion to ban the city’s domestic ivory trade that was passed in the Legislative Council—Hong Kong’s legislative body—unanimously six weeks ago.

Public opinion mirrors the legislative efforts —a 2015 survey conducted by the University of Hong Kong found that 75 per cent residents supported a ban on the ivory trade in the city.

China, the world’s largest market for illegal ivory, has been flourishing under the protection accorded by the cover of legal ivory sales. Hong Kong’s decision is likely to play an important role in restricting ivory trade in China. In a joint agreement last September, China’s President Xi Jinping and US President Barack Obama announced the US and China will work together to enact “near, complete bans” on the import and export of ivory.

Hong Kong’s decision comes at a time of heightened public awareness and political intent concerning illegal ivory. In December, conservation group Save The Elephants revealed the price of illegal raw ivory had plummeted almost 50 per cent over 18 months from $2,100 per kilogram to $1,100 per kilogram by November 2015.

Activists are now urging Leung to set a timeline for the ban to be imposed. “We will do it expeditiously, as quickly as we can,” Chun-ying said. “But this will, as you probably appreciate, require legislative amendments and that will be a matter for the Legislative Council,” he added.