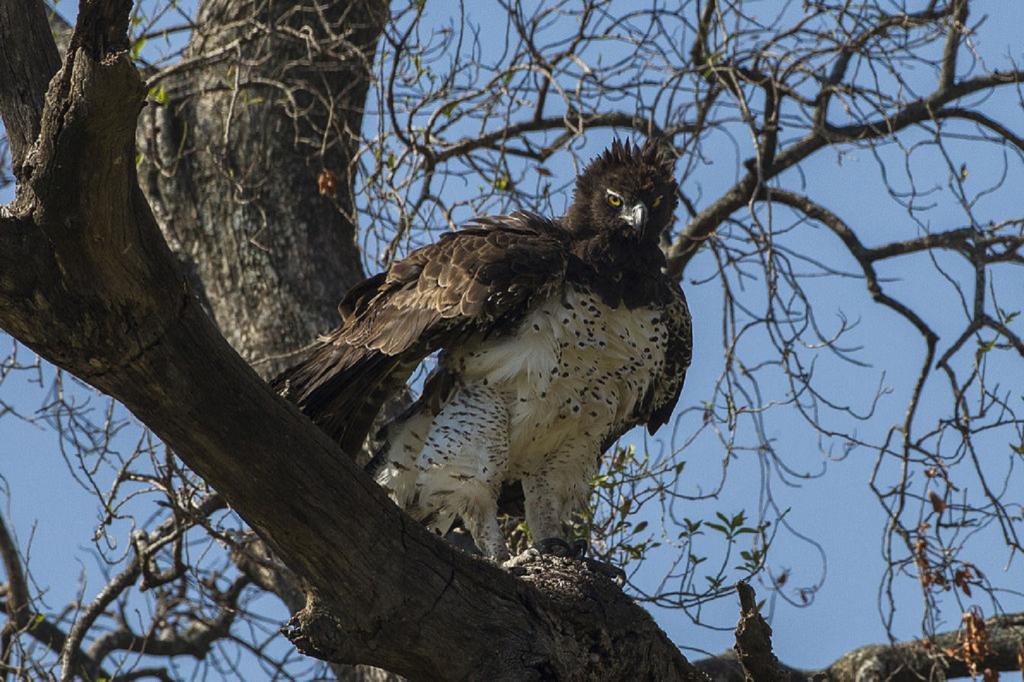 Martial eagles are in rapid decline throughout South Africa and many other parts of their range in sub-Saharan Africa. These declines have been so steep, that this species is now considered vulnerable to extinction.

But conservationists still don’t have a very good handle on what could be driving these declines across Africa. Suggestions include: habitat loss, deliberate and incidental poisoning, hunting in response to the fear of livestock loss, collisions with power lines and pollution.

A recent concern is a reduction in available prey. Unfortunately, our knowledge of what this species preys on is relatively poor. We only really have two South African studies from the 1980’s.

Our research sought to overcome some of these limitations. We explored some alternative options for identifying important prey eaten by this species.

As martial eagles are beautiful, people love to take photographs of them and post these online. We realised that hundreds of photographers, amateurs to professionals, have been collecting data. To help answer some conservation questions we tapped into this resource of photographs taken at multiple locations across the continent over many years.

Scientists use a range of methods to understand what raptors – birds that feed on smaller animals – eat. These include collecting and identifying prey remains from nest sites, inspecting pellets, which are regurgitated balls of indigestible prey parts, watching from hides set up at nests, or using remote technology such as placing camera traps at nests. Scientists can now even analyse the chemical properties, like stable isotopes in feathers to describe the types of prey eaten.

These approaches are incredibly valuable in assessing diet. Unfortunately, they present some limitations. Almost all are nest based. This limits them to the breeding season and prey that is brought to – and remains at – the nest. Martial Eagles also nest at really low densities. To get diet data from nests, researchers visit multiple sites in remote places and many times per season. This makes these studies challenging and expensive.

Our study used the free web app MORPHIC, developed at the University of Cape Town to search Google Images and catalogue photographs of martial eagles with prey. Our sources included websites, social media and photography platforms.

We trawled through 4,872 photos and found 254 images of the species with prey, and recorded data on eagle location, age, feeding position and type of prey. The photos came from many different countries across southern and eastern Africa, including South Africa, Kenya, Namibia, Botswana and Tanzania.

These images revealed that reptiles, birds and mammals each made up about a third of Martial Eagle diet. Prey type proportions varied broadly between different regions. Mammals dominated in eastern Africa but reptiles were more important prey across southern Africa. This was the first research to explore Martial Eagle diet in any detail beyond the borders of South Africa.

Another limitation of previous approaches, was their inability to explore the prey of non-breeding individuals in the population. Unlike adults, non-breeding sub-adults don’t have a central place, like a nest, where prey remains accumulate. Using web-based photographs however, we were able to examine the diet of sub-adult martial eagles and test whether it differed from adults.

We found that sub-adults fed less frequently on bird prey. Birds are agile, so sub-adult eagles may need time to acquire the skills and technique required to tackle this type of prey. To our knowledge, this is the first study describing the prey composition of non-breeding sub-adults for any raptor species. We hope our novel method will allows researchers to undertake similar studies for other raptor species in the future. Differences in diet across ages, populations and raptor species may allow for the implementation of more targeted conservation measures.

Our research contributes to conservation by providing key information on the ecological requirements of this threatened species. Our approach might also help inform conservation efforts for other predatory species under threat. Our approach can be used on any species, from raptors to big cats, as long as they are photographed widely enough across their range.

Anyone can tap into this online resource at minimal cost or effort and contribute substantially to global conservation. This powerful take on citizen science could help shape many aspects of future conservation research.