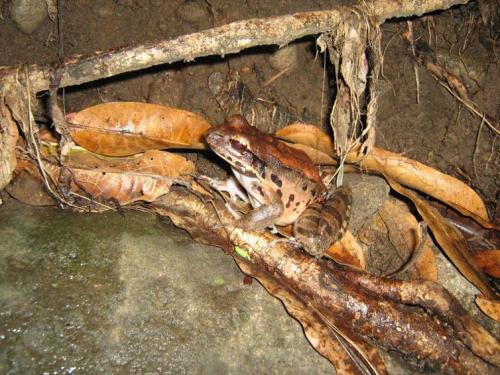 The mountain chicken frog managed the dubious honour of being at one time both the national dish and a top predator on the Caribbean island of Dominica. Down the centuries overhunting, volcanic eruptions and introduced predators have taken their toll on this, one of the world’s largest frogs. But in recent years the species has been brought to the brink of extinction by a newer, more serious threat described as “the worst infectious disease ever recorded among vertebrates”, chytridiomycosis (chytrid).

In susceptible species, the chytrid fungus causes thickening of the skin on which many amphibians rely for gas, salt and water absorption. This eventually leads to heart attack and death. While this sounds particularly unpleasant, the most alarming thing about the disease is the speed with which it can drive entire species into decline. You might assume that we have years to prevent the decline of endangered animals as they slowly drift towards extinction. But our research into the mountain chicken frog’s tragic story should serve as a warning about the need to act fast.

Fearing for the future of the species, conservationists' attention then moved to the only other remaining population of mountain chickens in the world, on the nearby Caribbean island of Montserrat. Tree frogs that carry the chytrid fungus are known to stow away in regular fruit shipments from Dominica to Montserrat, so it was only a matter of time before the disease arrived in the Montserrat population.

Sure enough, seven years after it was first observed on Dominica, chytrid was observed in Montserrat’s mountain chickens and the population was driven to near extinction within only 18 months. This marks the mountain chicken decline as one of the fastest observed collapses of any species ever recorded.

From the thousands that lived on both islands before the arrival of the disease, there are now thought to be only two mountain chickens on Montserrat and about 100 on Dominica. This desperate situation required action.

Thankfully for the mountain chicken, a group of British and European conservation scientists joined forces with the governments of Dominica and Montserrat to form the Mountain Chicken Recovery Programme (MCRP). An eleventh-hour evacuation of 50 mountain chickens from Montserrat by the MCRP was successful in establishing a captive population in European Zoos. Frogs in these zoos have since successfully bred, ensuring that the species will not go extinct. At least for now.

The MCRP aims to save the mountain chicken from extinction, restoring the species to its historic range and increasing its resilience to future threats. But this is no easy task. The chytrid fungus persists in other amphibian species that appear unaffected and share the forests with the mountain chicken.

In order to manage the risk posed by chytrid and conserve the mountain chicken, the MCRP is trialling multiple novel conservation tools. It hopes these measures can not only save the mountain chicken, but also contribute to the conservation of the hundreds of other species impacted by this disease. These measures include the world’s first reported use of an anti-fungal drug in the field, following its successful use in captivity.

Several years after the decline, the MCRP also began reintroductions of the mountain chicken to Montserrat, using individuals bred in the European Zoos. Four reintroductions have been carried out so far and analysis is ongoing to measure how successful they have been and how they can be modified to improve their chances of survival.

While these actions are important in preventing species already affected by the disease from going extinct, the most effective protection for other animals would be to stop chytrid spreading in the first place. But even when we are able to predict the arrival of the disease, as on Montserrat, we often have insufficient resources and capacity to stop it.

Without action, amphibian-rich countries such as Sri Lanka – where chytrid is yet to arrive – could suffer a similar fate with catastrophic levels of species loss. If we are to successfully prevent the extinction of further species, we must find ways of developing conservation capacity in those places where amphibians are most at risk.