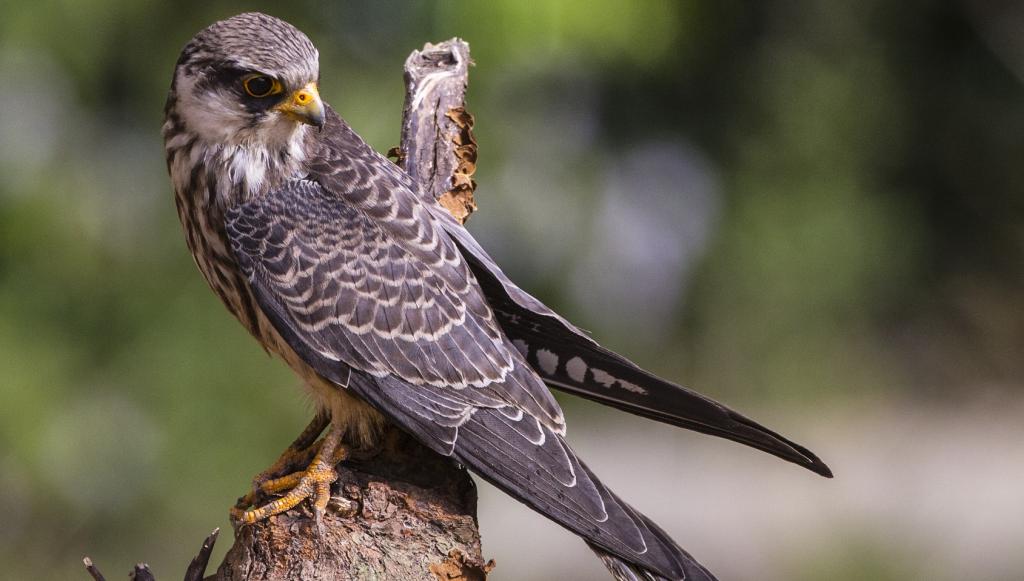 A radio-collared female Amur Falcon (Falco amurensis) named “Longleng” is making history as its sixth consecutive flight over India is being documented. Longleng was radio-collared in October 2016 in the Yaongyimchen Community Reserve in the Longleng district of Nagaland, after which it was named. On November 4, 2018, two more Amur Falcons, “Tamenglong” (a female) and “Manipur” (a male), were also tagged in Tamenglong district in Manipur. Unfortunately, Manipur was found dead after four days later in Tamenglong district while Tamenglong has lost contact after reaching North Luangwa National Park of Zambia in southern Africa during mid-December 2018.

This year, Longleng reached Somalia, on the western Indian Ocean, after flying from southern Africa on April 17, according to a media report. On April 29, Longleng started on a four-day non-stop flight over the Arabian Sea. She then entered Surat in Gujarat. From there, she flew over Maharashtra and made her first stop in a forested tract in Gadchiroli district in eastern Maharashtra. Longleng is currently in Rayagada, in Odisha, waiting for Cyclone Fani to get over. She is then expected to fly over Northeastern India, including Nagaland and Manipur, then to Myanmar and thence, to China.

Amur Falcons originate in the region of the Amur river and its basin, in northeast Asia, which include eastern Mongolia, Northeastern China and the Russian Far East. For winter, they fly over Asia and the Indian Ocean to southern Africa and make the return journey during summers to the Amur Basin. The yearly journey is nearly 20,000 kilometres. In between their journeys, the birds stop in Nagaland and India, where they are being studied for their migration routes since 2013.

Will Kerala become the first Indian state to have its official amphibian?

The process to declare a unique species of frog named variously as the purple frog, the pig-nosed frog and the Maveli frog as Kerala’s state amphibian. A proposal floated by herpetologist Sandeep Das for the same will come up on the agenda of a committee of the Wildlife Advisory Board, which is to meet later this month, according to a media report.

The frog’s scientific name is Nasikabatrachus sahyadrensis is found only in the southern part of the Western Ghats. Its most unique characteristic is that it lives out its life underground and comes out only once a year, to breed. Which is why, it has been given the name ‘Maveli’, after the benevolent Asura king Mahabali, who, according to Hindu mythology, was banned to the nether world by the gods and is said to come to earth once a year, celebrated as “Onam” in Kerala.

Female wild buffaloes to be brought from Assam to Chhattisgarh sanctuary

According to a media report, female wild buffaloes would be brought from Assam to Chhattisgarh’s Udanti Wildlife Sanctuary. Officials from both state governments have agreed to the move according to the report. Udanti Wildlife Sanctuary in Chhattisgarh has one of the two last remnant populations of the Asiatic Wild Buffalo in Central India. The other is the Indiravati Tiger Reserve in Maharashtra. The Udanti Sanctuary has been in the news as it has been left with only one breeding female whereas there are 12 bulls. On the other hand, Assam has a population of nearly 3,500 wild buffaloes. Indiravati Tiger Reserve does have a population of female wild buffaloes but the area is not accessible because of logistical reasons, says an expert in the report.

Bajirao, Mumbai’s only white tiger, has died of old age, according to media reports. The 18-year-old animal, in Mumbai’s Sanjay Gandhi National Park (SGNP), had been suffering from a lot of ailments including arthritis, alopecia and chronic ankylosis. With Bajirao’s death, the SGNP now has six tigers, four of them female. White tigers get their white colour due to a recessive gene. For a white Bengal tiger to be born, both parents must carry the unusual gene for white colouring, which only happens naturally about once in 10,000 births.

Animal rights activist Gauri Maulekhi has written to the government of Uttar Pradesh demanding the “immediate arrest” of Congress general secretary Priyanka Gandhi Vadra for violating the Wild Life (Protection) Act, 1972, according to a media report. Maulekhi’s letter was in response to an incident in Rae Bareli in Uttar Pradesh on May 2, 2019, where Vadra was seen handling and petting three protected species of (venomous) snakes in Purwa village. Venomous snakes in such conditions usually have their fangs broken, the posion glands destroyed or their mouths sewed up. Maulekhi said that Vadra knew about this but still chose to pet the animals and be photographed with them. In doing so, said Maulekhi, she had violated provisions of the Act that her grandmother, Indira Gandhi had promulgated.