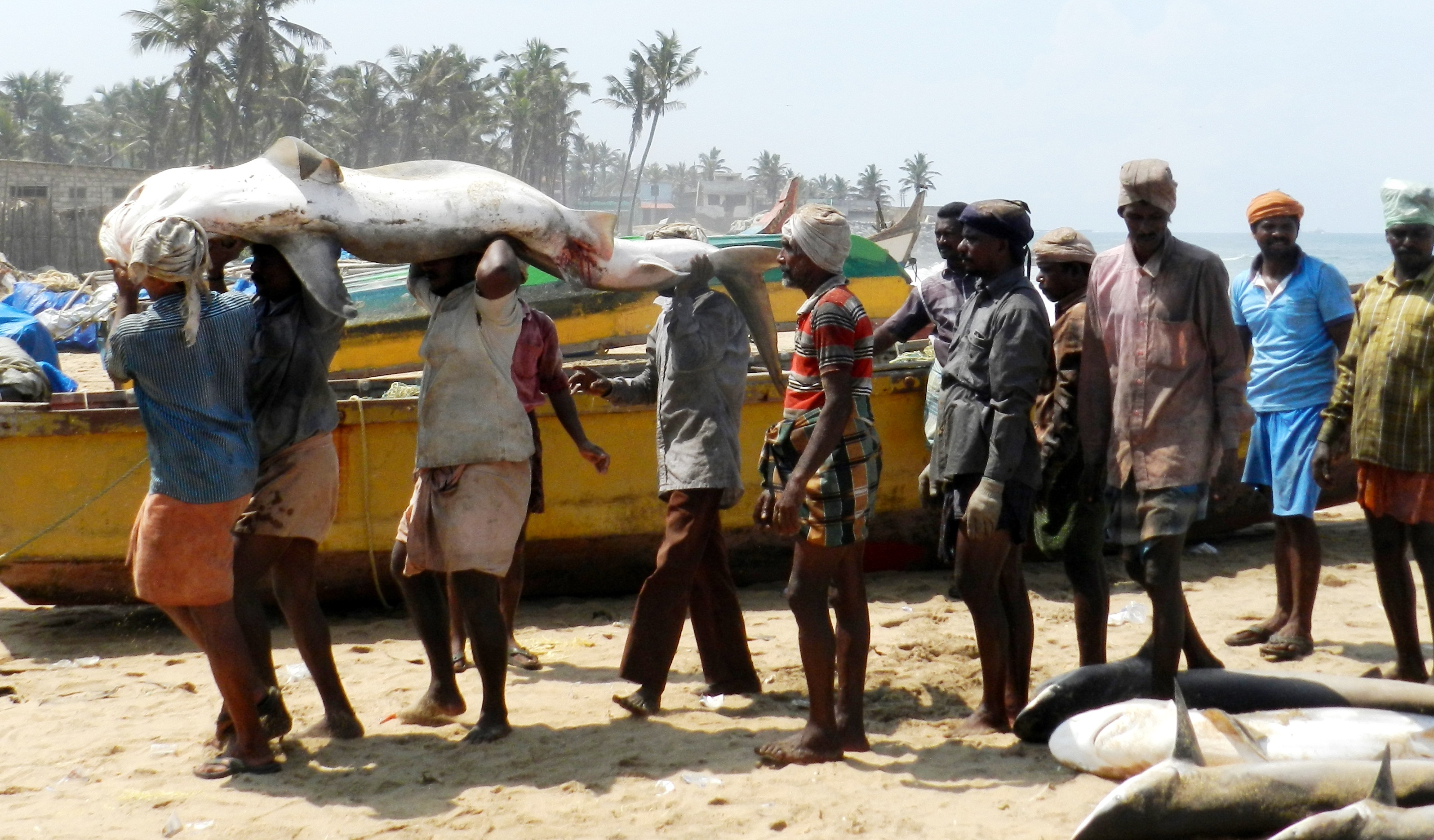 Despite being a major shark-fishing country in the world, India is yet to formulate a national action plan for conservation and sustainable management of sharks, scientists say.

Sharks are highly vulnerable to indiscriminate fishing and the country’s catch is steadily declining over the years, experts add. A document, Guidance on National Plan of Action for Sharks in India, released in June this year by the Central Marine Fisheries Research Institute (CMFRI) in Kochi, Kerala, highlighted the need for concerted efforts to protect sharks. CMFRI comes under the Indian Council of Agricultural Research.

The document says that a national action plan should be formed as soon as possible after consultation with the governments of coastal states, research institutes, stakeholders and fishing communities.

India is the second largest shark-fishing country in the world after Indonesia. According to the United Nations’ Food and Agriculture Organization (FAO) statistics, the country’s share in the global shark catch was about nine per cent during 2006-2009 with an average annual production of 54,614 tonnes.

On an average, the west coast of India contributes to 68 per cent of the annual shark landing, 66 per cent of skate landing and 28 per cent of ray landing.

Despite being a major shark-fishing country, India has been witnessing a steady decline in shark catch since 1998. According to CMFRI figures, landing of sharks (including rays and skates which are closely related to sharks)) in the country peaked to 74,943 tonnes in 1998 from 50,478 tonnes in 1991.

However, after that the landing started declining. In 2013, the annual shark landing in the country stood at 46,471 tonnes. Sharks constituted just 1. 2 per cent of the total marine landing in that year.

“The main cause (behind) this reduction in landing is indiscriminate exploitation of shark(s) in the past two decades,” says PU Zacharia, the head of the demersal fisheries division at CMFRI. He was one of the five members who prepared the document on sharks. An increase in the number and efficiency of large-mechanised fishing boats, expansion of fishing areas and deep-water fishing that lasts for several days at a stretch have led to a decline in shark catches, he adds.

Before mechanisation of boats, fishermen used to catch sharks, but it was not so indiscriminate, Zacharia says.

Sharks are among highly-valued fishes that have domestic as well as international demand. Utilisation of sharks in India is mostly in the form of shark meat with a good domestic market for fresh meat in the coastal states and in dried form in the southern states. The gross value of sharks that landed in the country’s coastal states in 2010 stood at Rs 278 crore.

Earlier, even when fishermen used to catch sharks in India, it was not so indiscriminate, the document reads. Shark fishing became targeted and indiscriminate when the demand for shark fins shot up in the international market. 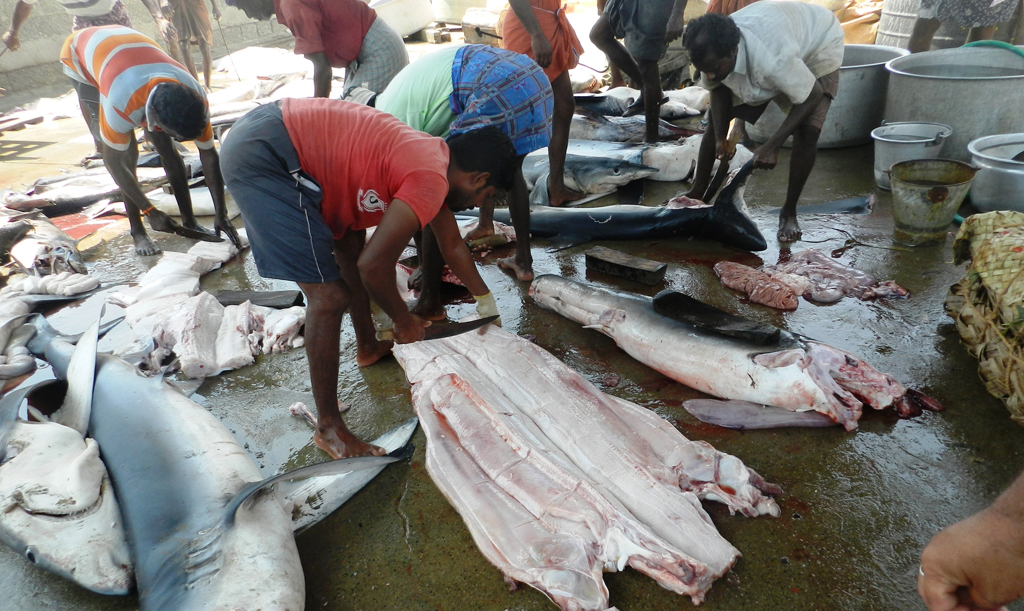 This happened after China started importing shark fins for making soup. To cash in on the booming market, several Asian countries such as Singapore, Taiwan, Malaysia and Indonesia also started importing fins and exporting them to China. The high-value of shark fins in the international market led to a cruel practice of catching sharks, removing the fins and throwing the shark back to the sea, thus forcing them to die a slow death. India’s export of shark fins in 2011 stood at 151 tonnes which was worth $ 14.99 million.

The biological characteristics of sharks make them highly vulnerable to indiscriminate exploitation which raises serious concerns about their safety, say CMFRI scientists. Sharks are generally large in size, grow slowly and mature late. Unlike many other fish species, most sharks do not attain sexual maturity until the age of seven and give birth to only a few offsprings a year.

“Since the shark is a top predator of the ocean, its overfishing poses a threat to the whole marine ecosystem,” says Zacharia. Consistent decline in catch and catch rates in the past one decade has raised serious concerns over the resource and the long-term viability of shark fishing, he adds.

Though India has initiated some measures for shark conservation, they are not adequate, scientists at CMFRI say. In 2001, four species of sharks—Whale Shark, Sawtooth Shark, Ganges River Shark and Pondicherry Shark were declared protected under Schedule 1 of The Indian Wildlife (Protection) Act, 1972.

This was the result of rampant Whale Shark hunting along the north-west coast of the country, particularly in Gujarat, during the second half of the 1990s.

Besides this, two species of rays, three species of sawfish and one species of guitar fish have also been included in the list. Exploitation and trade of these species have been banned and declared punishable offences. However, the banned species are not seen much in the Indian oceans.

In August 2013, the Ministry of Environment, Forest and Climate Change (MoEF&CC) approved of a policy on shark finning that prohibited the removal of shark fins on board a vessel in the sea, and advocated landing of the whole shark.

In September 2014, India became a signatory party to the Convention on International Trade in Endangered Species of Wild Fauna and Flora (CITES), a multi-national treaty to protect endangered plants and animals.

In February this year, the commerce ministry issued an order, prohibiting the export and import of shark fins. “However, strategies to avoid protected or trade-regulated species from capture in directed or multi-species fisheries do not exist in the country,” the guidance document says.

India has also regulated fishing practices through demarcation of 31 marine protected areas. Other measures include fixing minimum legal size (MLS) for capture of common shark species, gear-specific mesh size requirement restriction on operation of certain types of gears like ring seines and purse seines, introducing by-catch reduction device and seasonal ban on fishing, particularly trawling, activities, from June 15 to July 31 along the west coast and from April 15 to May 31 along the east coast.

“These measures can help reduce shark by catches, but there is no proper assessment on this,” the document reads. The guidance to nation action plan suggests that recovery plans to revive shark stocks that have been assessed as “collapses”, “depleted” or “declining” need to be drafted and implemented at the earliest. Restriction on fishing of juveniles and breeding sharks and release of pregnant sharks unharmed may be effective to an extent in coastal areas. Demarcation of breeding grounds and seasons can be done after proper assessment and evaluation of shark stocks at different stages of its life span.

A major limiting factor in the formulation and implementation of action plan and management strategy for sustainable shark fishing is the lack of comprehensive data for a sufficiently long period which should form the basis of proper status assessment of shark stocks, the document reads.

Though data on regional availability of sharks, species diversity, catch, effort, landing, trade and market value are available, the knowledge base requires a lot of improvements, the document reads. The central and the state governments should facilitate efficient data collection and research by allocating adequate funds.

Conservation and sustainable management of sharks need to address the food and livelihood issues of the fishing communities in the country, the document says.

“Development and implementation of the National Plan of Action for Sharks call for integrated research and discussion among the central government, state government, research organisations, non-profits working in the sector and stakeholders, including fishermen, traders and exporters,” the document reads.