India's only wetland cat is under multiple threats 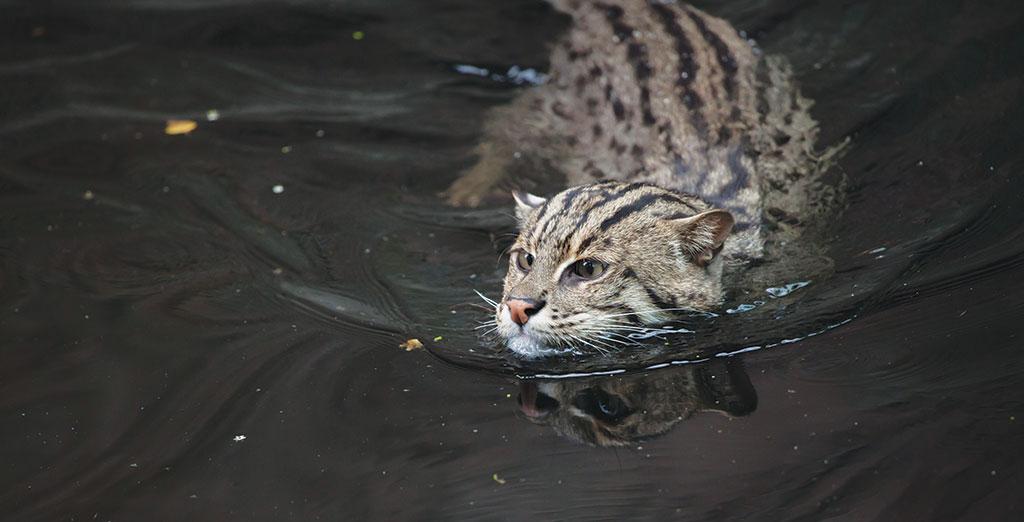 Fishing cat is a symbolic species of floodplains, deltas and coastal wetlands of South and Southeast Asia. They have a patchy distribution from Sind in Pakistan to Cambodia. The South Asian countries of India, Nepal, Bangladesh and Sri Lanka hold the core of the global Fishing Cat population. In India, it is largely restricted to the floodplains of Ganga, Yamuna, Brahmaputra, Sundarbans Delta and smaller coastal wetlands along the Bay of Bengal formed by Mahanadi, Godavari and Krishna rivers. As these areas are biologically productive, they have attracted human civilisation for colonisation and food production and this has put the Fishing Cat under threat.

Habitat loss due to development activities is the number one threat to the Fishing Cat. This is happening mainly due to contradictions in policies. India is a signatory to the Ramsar Conve ntion on Wetlands and considers “marshlands” (Fishing Cat habitat) as wetlands. Even our Central Wetland Rules, 2017 give it the same recognition. However, the Wasteland Atlas of India, 2010, considers them as “wastelands”. As a result, the Union Ministry of Water Resources has recommended that waterlogged areas should be reclaimed as per its Command Area Development and Water Management Programme. Big pisciculture farms instead come up replacing natural riparian vegetation. The Fishing Cat has disappeared from the East Kolkata Wetlands due to intensive aquaculture—the last dead cat was found in 2012. Shrimp farming is another growing threat to mangrove habitats of the Fishing Cat. Between 1989 and 1999, shrimp farms increased by 10 times in the Godavari region by eradicating mangroves.

Private ownership of ponds and aquaculture leaves very little room for tolerance. Yet this intolerance was not always so. You can still see the Fishing Cat engraved in the structure of Angkor Wat on the floodplains of Mekong. So they must have co-inhabited spaces from time immemorial. This unique cat also faces threats from hunting for meat and skin. Tribal hunters indulge in ritual hunting practices throughout the year. These are serious problems as the cats are restricted to remnant patches and a single bout of hunting can wipe out a population from a patch.

The Fishing Cat Project, a part of The Fishing Cat Working Group (Small Wild Cat Conservation Foundation), that began in 2010 gave some recognition to the cat. In 2012, the West Bengal government officially declared the Fishing Cat as the State Animal and the Calcutta Zoo has two big enclosures dedicated to them. The government also formed Fishing Cat Protection Committees in all blocks of Howrah district. All three tiers of the rural councils were involved in Fishing Cat awareness generation. From 2016, a programme called “Know Thy Neighbours” (a Fishing Cat monitoring protocol by the community) was initiated under which enthusiastic residents were given a camera trap so that they could monitor their backyard cats. They were also trained on how to identify different individuals and then encouraged them to name them.

The Fishing Cat Project provided scientific evidence of the cat’s presence repeatedly for legal battles taken up by PUBLIC, a non-profit which works on environmental issues in and around Kolkata, to safeguard wetlands. Another non-profit Human & Environment Alliance League (HEAL) is working on documenting the remaining marshy patches in south Bengal along with the Fishing Cat Project—the plan being to work with implementing agencies to safeguard these habitats from development. To curb ritualistic hunting of Fishing Cat, HEAL launched Zero Hunting Alliance—a platform where civic volunteers could work with enforcement agencies to implement anti-hunting strategies. With the Calcutta High Court’s support, the group works with the Forest, Railways and Police departments to curb hunting. The motto of the alliance is to convert tribal hunters from being adversaries of conservationists to their allies.

According to McKinsey Global Institute’s report “India’s urban awakening: Building inclusive cities, sustaining economic growth”, 2010, a new Chicago city will be built each year in India and transport infrastructure is set to increase by 20 times. Where will the land for this come from since it is a finite resource?

Despite multiple threats, the Fishing Cat was recently downlisted to “Vulnerable” from “Endangered” in the IUCN Red List species assessment. Clearly, the assessors lack the foresight of veteran ecologists. Wildlife scientist George Schaller says, “IUCN downlists species merely on the basis of numbers rather than also taking habitat fragmentation and immediate future threats into consideration.”

(This article was first published in the September 1-15 issue of Down To Earth under the headline 'Prisoner of Contradictions').