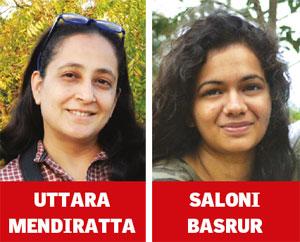 In 2005, forest officials and scientists shockingly revealed that Rajasthan’s Sariksa Tiger Reserve, once among the best places to see tigers, had lost its entire big cat population. A similar story played out four years later. This time tigers had disappeared from the Panna Tiger Reserve in Madhya Pradesh. In both these cases, it soon became clear that poaching by organised gangs had played a key role in exterminating the big cat. In subsequent years, seizures of large consignments containing tiger, leopard and otter skins in India, China and along their shared border threw new light on the magnitude and international nature of illegal trade of these Indian species.

At the global scale, illegal wildlife trade ranks as the fourth largest illegal industry after narcotics, human trafficking and counterfeit products and is valued at approximately US $19-26 billion per year. According to a recent report by the United Nations Office on Drug and Crime, at least 132,144 seizures of illegal transnational wildlife trade, involving thousands of species, were made across 120 countries in the past decade. Although not a major consumer in the global illegal wildlife market, 20 per cent of all wildlife seizures recorded during 1996-2008 took place in India.

Illegal trade in tigers and other large wildlife invariably garners the maximum attention, but these charismatic species are just part of a broad spectrum of targeted species in India. While we sometimes gain small glimpses into this wider trade through news reports, our understanding of the specifics, in terms of what species are traded, how many, where and by what means, is severely limited.

In this article, we report a systematic assessment of online media articles containing reports of seizures of Indian wildlife made by enforcement agencies between January 2013 and June 2016, which was carried out by us at Freeland India, a Delhi-based antitrafficking organisation. Media reports were collated into a database using a combination of automated and manual keyword-based online searches, and further processed manually, to glean information on seizure locations, species seized and origin and destination details, if the consignments were seized in transit. 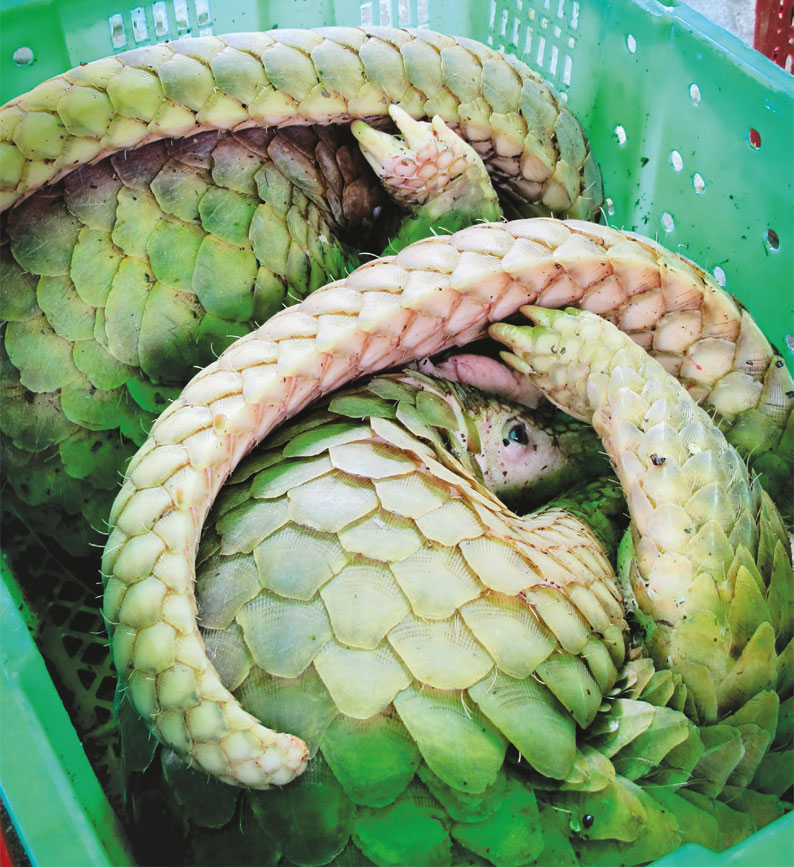 Overall, we recorded 1,291 cases of seizures of illegally harvested and/or traded wildlife and wildlife products (hereafter referred to as cases) involving at least 180 species, including 48 mammals, 33 reptiles, 71 birds and four tree species across India, of which the red sanders was the most common (see ‘Trap zones’). Leopards (182 cases), Asian elephants (138 cases), Indian one-horned rhinoceros (124 cases) and Bengal tigers (113 cases) were the most frequently found species in seizures.Ungulates, including deer, antelopes, wild cattle and pigs, all of which are illegally hunted for meat in different parts of the country, were detected in 160 seizures.

Why key species are hunted

Pangolin, a small elusive anteater, was found to be the one of the most traded mammals. Pangolins are in high demand across markets in China and Southeast Asia for meat and scales, which are used as ingredients in preparing traditional East Asian medicines. A recent spurt in pangolin scale seizures within Indian borders suggests that our country is increasingly being targeted for supply to international markets.

Tortoises and freshwater turtles (tft) were the most commonly seized (10 species in 185 seizures) reptiles. These mainly included the Indian star tortoise and the spotted pond turtle that are in huge demand in pet markets in India and abroad. Soft-shell species such as the Indian flapshell turtle, which are popular for meat in India and are internationally traded for meat and traditional medicines, were also frequently seized. tft seizures regularly involved thousands of individuals and were confiscated in trains, international airports and at various locations along the international borders. International tft trade by air and road was most often destined for Thailand and Bangladesh, which are both known tft trading hubs in the region. 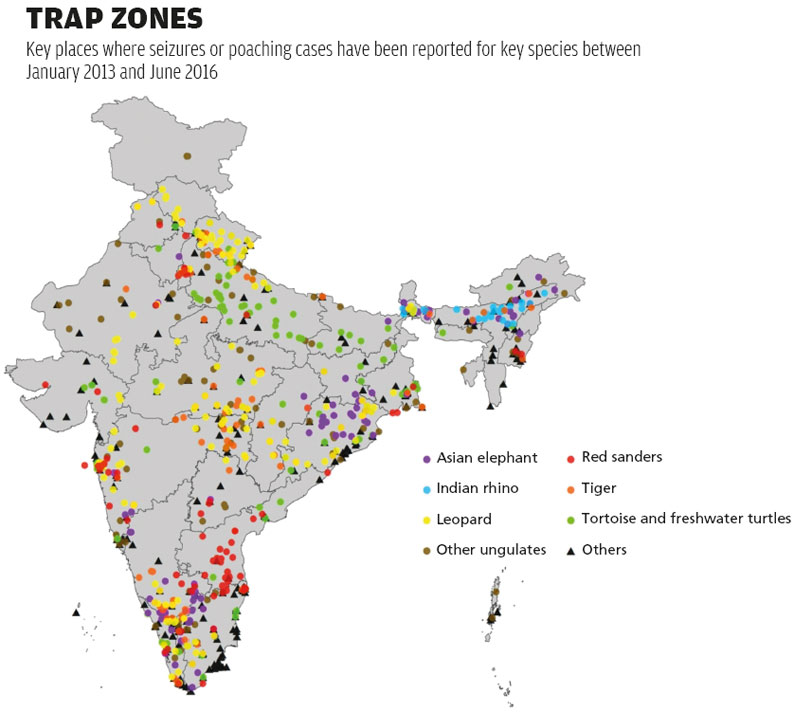 Birds were present in 12 per cent of all cases with over 70 species recorded. While a large number of birds were presumably destined for the domestic meat and pet markets, reports of large seizures suggest that Indian birds also face the threat of illegal international trade. Poaching of Indian peacocks for feathers, although illegal, has also continued in India with consignments of these being seized at international airports.

Marine species were recorded in over 50 cases. These included seizures of species of sea horses, corals, shells, sharks and a large number of sea cucumber seizures (22 tonnes in 34 cases). Although not popular for local consumption, sea cucumbers are increasingly being targeted to supply a growing international market. These marine invertebrates, which go by the names of “bêche-de-mer” or “tagalong” in culinary circles, are high in demand in Chinese cuisine, and possibly also used, in preparing traditional medicines. Studies in other parts of the world have documented population crashes of some species driven by growing market demands. In India, we currently lack even a basic understanding of the impacts that current off takes are having on sea cucumber species and their populations.

Seizure reports clearly point to the large and international nature of illegal wildlife trade in India. They also shed light on the increasingly organised and sophisticated operations of criminal syndicates involved in the trade. During the study period, enforcement agencies seized illegal wildlife consignments destined for at least 13 destinations beyond India’s borders. While many seizures were destined for neighbouring countries via land routes, others were made along air and maritime routes to Southeast Asia, West Asia and Europe. 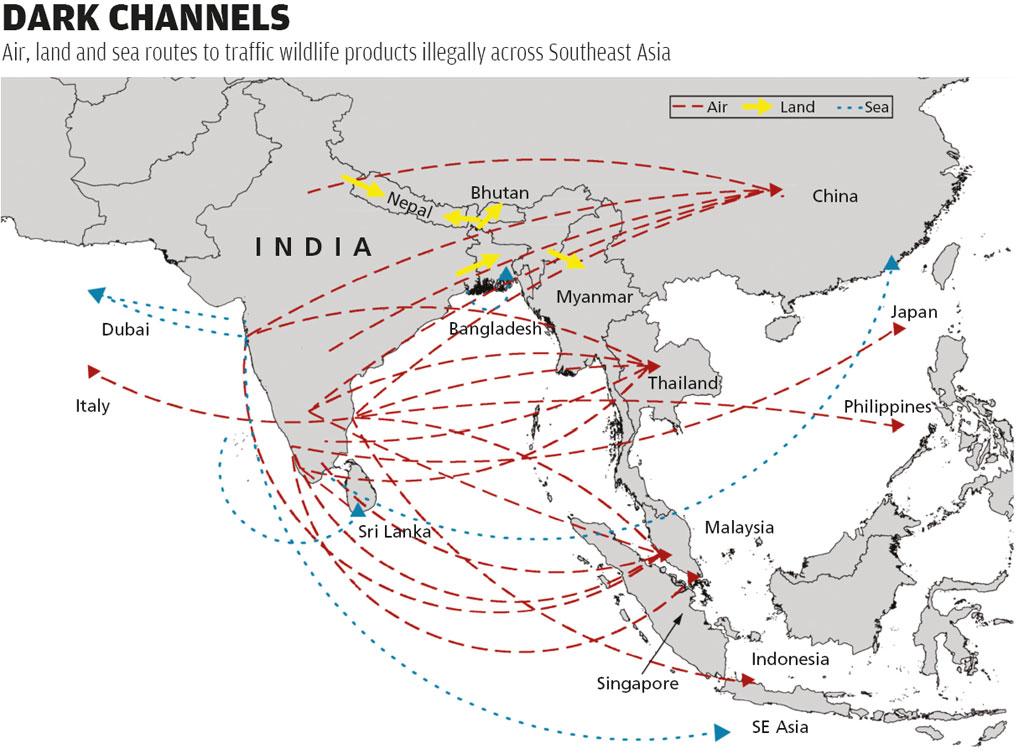 The article has been taken from State of India's Environment, 2017