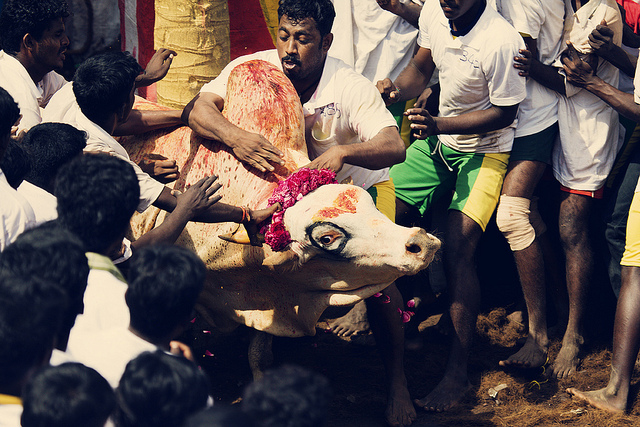 The Supreme Court has stayed the Centre's recent notification allowing Jallikattu — the traditional bull-fighting sport — for this year. The Rekla (bullock cart) race has also been banned, just days ahead of the Pongal festival, a time when both the sporting events are held.

Justice Banumathi, who had banned Jallikattu in 2003, had recused herself from the hearing earlier today. The case was then heard by Justice Dipak Misra. The Bench of Justices Dipak Misra and N V Ramana prima facie agreed with the arguments made by the petitioners — led by Animal Welfare Board of India — that Jallikattu is "inherently cruel" and bulls cannot be used or tortured as performing animals for human festivity.

Last week, the Centre had lifted the ban on Jallikattu that had been imposed by the Supreme Court in May 2014 — a move which has been strongly condemned by various animal rights’ activists. They have alleged that the Centre’s motive to lift the ban is political as Jallikattu is very popular in parts of Tamil Nadu and is conducted during the four-day Pongal festival.

Activists say that before being sent to the arena, bulls are tortured, starved, administered alcohol and inflicted with pain to make them violent. As a result, the bulls suffer from severe forms of physical and mental injuries and death, the petitioners said.

Even as Animal Welfare Board of India (AWBI) Chairperson Major General (retd.) R M Kharb and Vice Chairperson Chinny Krishna had strongly condemned the government’s decision to lift the ban, reports suggest that the Centre has asked them to resign on Monday evening.

On Monday morning, the AWBI, People for Ethical Treatment of Animals (PETA), Federation of Indian Animal Protection Organisation, Compassion Unlimited Plus Action and individuals had filed a petition in the Supreme Court challenging the government’s decision to lift the ban.