247 accused arrested with high-end arms, but no poacher convicted for killing 149 rhinos in five years 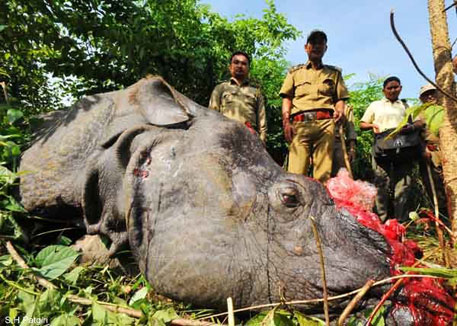 The number of one-horned rhinos in Assam's Kaziranga National Park has increased to 2,401 from 2,329 in two years. But all is not well at the national park.

As per the police department’s data, more rhinos have been poached during the past five years than ever before. Professional poachers are getting help from various insurgent groups. These groups are supplying arms, trading in horns and even killing the rhinos themselves.


The information was given in response to a Right to Information (RTI) query filed by wildlife activist Rohit Choudhury, who sought details of rhino poaching cases in Kaziranga and four districts adjoining the park.

The RTI reply says 52 rhinos have been poached inside Kaziranga and 97 killed in surrounding Golaghat, Karbi Anglong, Sonitpur and Nagaon districts between 2009 and the beginning of 2014. Though 247 people have been arrested for poaching during this period, not a single one has been convicted so far.

At least in four cases, the police registered complaints of direct and indirect involvement of insurgent groups in rhino poaching. As per the RTI reply from the superintendent of police of Karbi Anglong district, four suspected poachers led the police to a rhino carcass in November 2012, which they confessed to have killed “along with a group of Karbi People’s Liberation Tigers (KPLT) cadres led by Ron Rongpi, the outfit head in November 2011”.

In another case in October 2012, an accused confessed that the rifles he used in rhino poaching were supplied to him “…by the defence secy (secretary) of Karbi Longri NC Hills Liberation Front KLNLF, another armed insurgent group, Shri Songja Timung…”.

In September 2012, the Karbi Anglong police arrested “a group of rhino horn dealers” who confessed that they were “…going to purchase rhino horn from the Chairman of KPLT, Shri Ron Rongpi and Finance Secy Dondi Kramsa…”.

In another case, the district police got information in April 2013 that “KPLT had given order to some poachers to kill rhino by supplying arms and ammunition”. In the operation that followed, the police arrested a suspect with a .303 rifle fitted with a silencer.

In fact, the RTI responses show that most of the accused have been arrested with high-end arms and ammunitions. The recovered weapons include AK-56 rifles, AK-47 rifles, .303 rifles, stun guns, SBLM guns, cases of INSAS and SLR guns, pistols (including 7.65 mm made in Spain) and other live ammunitions, shows the RTI.

“This is a big shock for wildlife lovers. It is unfortunate that the militant groups are using rhinos to earn money which they would use for buying arms to run their operations. And the zero conviction rate shows how ill-equipped our governments are to deal with such crimes,” Choudhary, who has been fighting legal cases against illegal mining and unauthorised development in and around Kaziranga, said.

He suggests that the government should conduct proper training of the officers in-charge of the police stations in four districts under Wildlife Protection Act, 1972, to improve the conviction rate in poaching cases. “The current state of legal proceedings is no deterrent for the poachers,” he added.

When asked about the involvement of militant groups in rhino poaching, A P Rout, the additional director general of police and in-charge of the Anti Rhino-poaching Special Task Force (STF), said there were definitely hints of poachers’ links with militant groups. “Poachers generally do not possess AK rifles. They normally use .303 rifles. We are probing the possibility of militants groups from Nagaland and Manipur supplying arms to the local poachers.” On the question of conviction, Rout expressed inability to comment saying he joined the STF less than two months ago and had not yet looked at the data on conviction.