A wildlife biologists says when Gir can only carry 250-300 lions, it has about 500 lions. Credit: Getty Images

The Gujarat forest department has maintained that the recent deaths of 23 Asiatic lions in Gir is a one off incident. “The deaths have taken place in a small area and this is the first time such an incident has occurred,” said DT Vasavada, chief conservator of forest (wildlife), Junagadh.

However, if one takes into account how things are in Gir, the spread of canine distemper virus (CDV) doesn’t seem like an unlikely epidemic to have hit the state out of the blue.

In the first part of the Down To Earth series on the recent death of Gir lions, we explored the connection of these lion deaths with the Una incident and how mismanagement by the forest department could have exposed the lions to the deadly CDV. But this isn’t the only malpractice that’s continuing unabated in the area.

There is another reason lions in Gir, particularly in the Dalkhania range, get food from the surrounding villages—illegal tourism. Private tourist operators organise illegal lion shows in the revenue villages near Gir. “Anyone can go to the Dalkhania range, buy a calf and the village residents will ensure that the tourist sees a lion making a kill,” says Kamelesh Adhiya of Asiatic Lion Conservation Society, a Rajkot-based non-profit working for the conservation of lions. This costs just Rs 5,000. Though this amount is substantially higher than the cost of a legal tour ticket of Rs 200, it guarantees a lion sighting. But such shows expose lions to bovine and canine populations who could carry CDV.

A video sting operation undertaken in June by the local Sandesh television news channel exposed the lion show circuit. The video had a private guide saying that the show was being held with the permission of the forest department. The state government ordered an inquiry after the sting, but the findings are yet to be released. “Since tourist activities in the national park are only allowed in the Sasan range, illegal tourism is flourishing in other ranges,” says Kabawat Bhai, a retired police station in-charge of Khisari village in Amreli district. Amreli is one of the three districts of which the Gir National Park and Wildlife Sanctuary is a part, the other two being Gir Somnath and Junagadh.

“There is a penalty of Rs 25,000 if one is caught conducting a lion show, but people still do it,” a forest official said requesting anonymity. Another reason lions visit surrounding villages is the increase in their population. The Gir National Park and Wildlife Sanctuary spans 1,412 sq km, which is all protected area (there are four categories of protected areas in India—national parks, sanctuaries, conservation reserves and community reserves). But lions are also found in the surrounding 22,000 sq km territory called the Asiatic Lion Landscape. 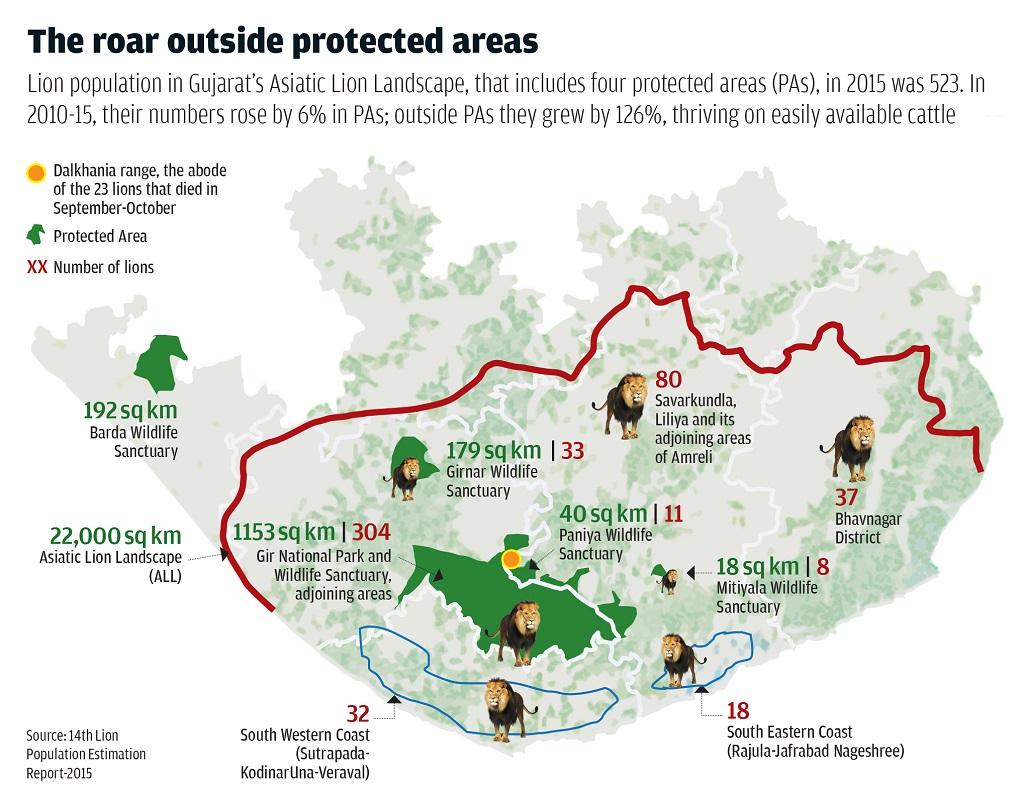 According to the Gujarat government’s 14th Lion Population Estimation Report of 2015, the lion population in all has increased by 27 per cent—from 411 in 2010 and 523 in 2015. But this growth has been lopsided. While the increase in lion numbers inside the protected area has been just 6 per cent (from 337 to 356), the increase outside has been a phenomenal 126 per cent (from 74 to 167). As a result, Gir is bursting at its seams with lions. “A male lion needs an average “territory of 85 sq km, while a female needs 35 sq km. As per this estimate, Gir can carry 250-300 lions,” Meena Venkataraman, a wildlife biologist based in Mumbai, told dte. Even if the current deaths are taken into account, Gir has about 500 lions.

On one hand, the lion numbers have gone up, and on the other, the staff shortage in the forest department has increased, leading to laxity in vigilance, protection and management of forests. According to the Gujarat Forest Department Annual Report 2016-17, of the 542 range forest officer (RFO) positions in the state, only 51 per cent were filled and of the 3,736 guard positions, only 70 per cent were filled. What’s worse, in the same financial year, 98 rfos either retired or took voluntary retirement after clearing exams to get promoted to the post of deputy conservator forest (DCF). “All RFOs appointed at Dalkhania since 2014 have been either on probation or taken this range as additional charge,” says a forest official on condition of anonymity. “Even those who were appointed here have used the office time to study for departmental promotion exams to get promoted,” he adds.

The field staff too says that the working conditions are very difficult and the salary does not come on time. “I have not received salary in three months. While we have been made permanent, the department says that only people who have been in service for more than 15 years are eligible for benefits like housing allowance and medical insurance,” says Bhavgar Garajgar Gosai, head of the Van Majdoor Mandal, Amreli district. “In Amreli district, 750 people belonging to the rojamdar community work with the forest department, but only around 10 get the benefits,” he adds.

People of the Rojamdar community of Gir have served as lion trackers for ages. They also look for injured or sick lions and help the forest officials in their day-to-day work. There are around 1,500 rojamdars in all. “We’ll give the government an ultimatum and if nothing happens in 15 days, we’ll sit on a strike,” Gosai says.

Now, since the forest department is under pressure due to the deaths of 23 lions, it has sent notices to 35 illegal hotels operating within the eco-sensitive zone of the Gir Protected Area on October 20.

(This is the third section of a four-part series on the death of Gir lions. It will also appear in Down To Earth's November 1-15 print edition under the headline 'Pride goes before a fall'. Read the first section here and the second here)