Odisha lost 179 elephants to electrocution since 2000

Electrocution is killing the pachyderms of Odisha, once prized for its war elephants, data accessed by Down To Earth has revealed.

Information provided by the Wildlife Society of Odisha (WSO) reveals a picture of criminal neglect on part of the state authorities to prevent the deaths of the animals due to electrocution.

The data shows that since 2000, Odisha has lost a total of 179 elephants to electrocution. Between 2000 and 2010, there were 77 electrocution deaths, mostly due to sagging power lines averaging less than 8 elephants in a year. “During this period, the government had not taken any preventive steps to control electrocutions,” the WSO has written in its official letter of October 29 to the state government, accessed by Down To Earth. 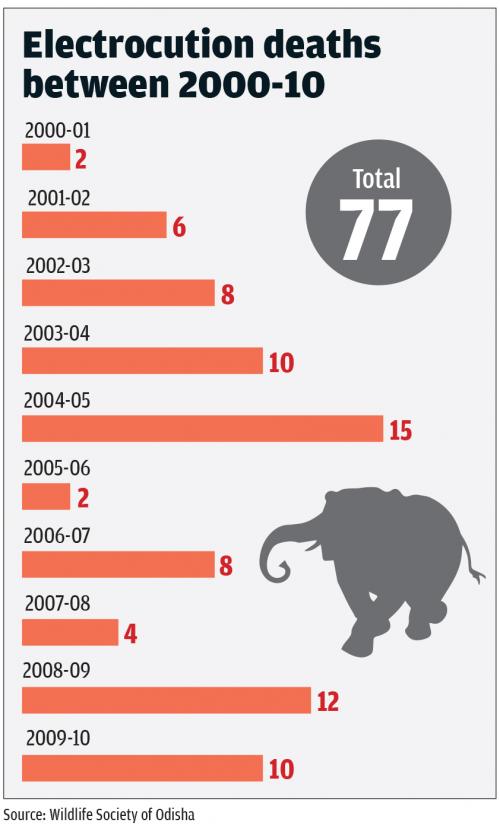 However, from 2010 onwards, the situation turned even worse. “From April 1, 2010 to October 27, 2018 (8 years & 7 months), the state has lost 102 elephants to electrocution, averaging about 12 elephants in a year,” the letter notes. It also points out that this uptick in deaths has come about despite some preventive steps being taken by the government, including allocation of adequate funds to strengthen power lines.

Elephants in Odisha have been electrocuted either unwittingly due to sagging overhead lines and electrified fences or by poachers who have set up live wire poaching traps.

Sixty per cent of the electrocution deaths currently are due to live wire poaching. Before 2010, the majority of the unnatural elephant deaths, approximately 80 per cent, were due to sagging power lines. Since 2010, out of 102 electrocution deaths, 42 have been due to sagging lines and 60 due to live wire poaching which reveals the absence of patrolling.

The two districts most affected by electrocution are Angul and Dhenkanal, where the latest accident took place.

The letter calls out the Forest Department’s lack of monitoring and plans to prevent electrocution. “Sagging Lines are not detected and reported to discoms and not followed up till they are rectified even if they are reported. Not a single discom official has been convicted and jailed under the Wildlife (Protection) Act, 1972 despite the death of nearly 120 elephants caused by sagging overhead lines. No action has been taken against senior officers for dereliction of duties,” it says.

“There is a need to set up reinforced electric poles fitted with spikes to prevent elephants rubbing against them and lifting of sagging overhead power lines. Overhead wires across all elephant habitat and elephant movement zones should be insulated. All defunct solar-powered fences must be dismantled,” the letter demands.

In contrast to elephants, tigers in Odisha have fared better. A quick look at data provided by non-profit Wildlife Protection Society of India reveals that between 2013 and 2017, 4 tigers died in Odisha, mostly due to suspected poisoning and poaching. 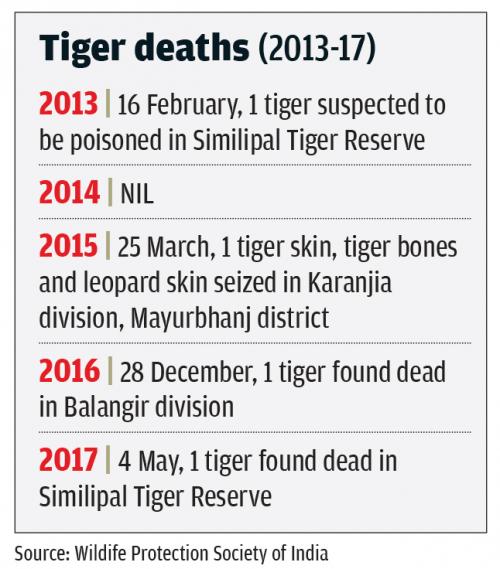 However, the WPSI’s Tito Joseph also blamed habitat fragmentation. “Corridor fragmentation is a main issue in all over India, it immediately leads to man-animal conflict and in the long term will affect genetic diversity,” said Joseph.